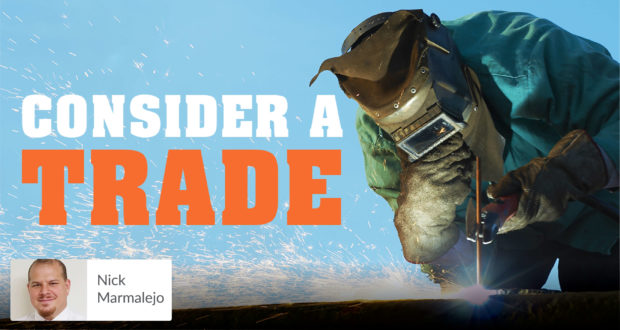 Helping You Decide Between College and the Skilled Trades

Seton Guidance Counselor Nick Marmalejo weighs the pros and cons of a career in the skilled trades including financial, job satisfaction, and glory to God.

In the guidance office, I find most people want to know about the mysterious process of applying to college.

Very few, however, inquire about learning a trade. The truth is Seton prepares you for both college and trade work, and the two are not mutually exclusive.

Read on for some thoughts on why practicing a trade may be an excellent life path.

From a young age, I was told by my dad I was going to college and that was that. My father, a structural steel iron worker, labored outdoors in Chicago’s frigid, windy winters to provide for the family, and he desired an easier life with more opportunity for all of his children.

I am sure many of you can attest to similar sacrifices and attitudes in your own family. As far as he was concerned, a life in the trades or the steel mills nearby was one he wanted to see me forego.

I do not blame him. Honestly, I have often found that many people would prefer their children go to college rather than practice a trade. Because of this common view, there is now a shortage of qualified tradesmen in many areas to do work. Furthermore, my own experience in wearing both the blue collar and the white collar has taught me that the grass almost always seems greener on the other side. In every career, there are both benefits and trade-offs.

A perception sometimes exists that the trades are for people who do not do well in school. Part of the reason for this is, following World War II, if one had a college degree, one was almost guaranteed a position in middle management and a secure, middle class lifestyle.

However, the opportunity landscape now looks much different. There is a surplus of people who have 4-year degrees, lots of college debt, and only soft skills and an iPhone in their personal toolbox.

Even in a re-vamped economy, newly-minted college graduates, depending on profession, are competing against numerous others who have—at least on paper—many of the same degrees and backgrounds.

Does this mean I am discouraging college? No, absolutely not! What I am saying is, depending on your personality and path, even with a college degree, there will be hurdles in the job market.

A four-year degree is not the immediate and sure ticket it once was to economic prosperity, contrary to a notion inculcated into me and many of my peers.

Conversely, individuals who acquire hard skills and pursue a trade confront a different set of opportunities. Skilled tradesmen and hard skills are now in demand. Good mechanics, plumbers, or roofers, for example, are worth their weight in gold. Typically, if they are good, their schedule is jammed, and one will pay a premium for their services.

Aspiring tradesmen also will incur less debt in their vocational education. They will have fewer up-front costs and barriers to entry to their profession. In fact, individuals with a bachelor’s degree often recognize an opportunity and leave their office job to pursue a trade. Eventually, if the gumption is there, some will go into business for themselves to earn a living and enhance the world with their trade.

Working conditions are often more on the adventurous side for those in the trades. Some people don’t like working outdoors, for example, but others would not have it any other way. In fact, I know several people who left their office life simply so they could work outside.

While that can be a wonderful way to experience the beauty of creation, it also can be rough and demoralizing at times. Regardless of where you find yourself on this spectrum, your daily work environment should absolutely be one of your considerations before choosing a life path.

Additionally, the ups and downs of an economy have a direct effect on specific professions. Building contractors who might prosper in fine economic times might find themselves struggling or closing shop in lean ones. I know this consideration is one of the chief reasons my father pushed me towards a 4-year college degree.

While there is no silver bullet that will slay all economic woes, whatever vocation you choose, be sure to select one that you believe will have job opportunities now and in the future.

On the side of Artisan

The desire to create and work with one’s hands often makes a trade initially attractive. Whether it’s turning wrenches, sawing lumber, or firing up a torch, there is undeniably a power, pleasure, and pride that comes with using tools and using them well. They extend man’s capacity to interact with and live in the world.

Indeed, a tradesman’s skills have intrinsic value and dignity. Our Lord chose the work of a humble carpenter for Himself. A day wielding a hammer may be physically exhausting, but often it is accompanied by a satisfying feeling of accomplishment.

Expertise in a trade also provides a person with a useful skill that will serve him or her in life outside the workplace. A running joke exists that a mechanic fixes everyone’s stuff but his own, but the reality is the mechanic still has the option. An individual without the mechanic’s skill or experience does not.

Greater still is the possibility for a skilled tradesman to elevate his work to the level of art. Soaring cathedrals and mighty castles did not appear in a vacuum. They were built by masters of their arts, many of whom often did not live to see the completion of what they had begun. Nonetheless, the world today stands in awe of these structures and of those who built them.

Trade or no trade, in the end what really matters is that what you do is the Lord’s Will. That’s it. In doing so, you raise the ordinary to the extraordinary, and give God the glory He deserves. The good news is that your Seton education will prepare you to do just that.

In closing, I would like to leave you with one of my favorite quotes about work, whether great or mundane. It comes from Dr. Martin Luther King, Jr., and reads: