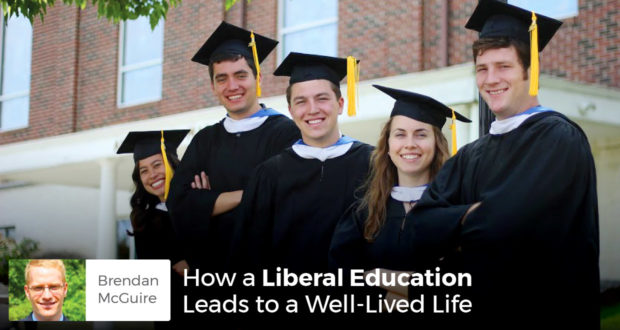 How a Liberal Education Leads to a Well-Lived Life

Dr. Brendan McGuire explains why the study of history is an essential part of preparing a student for a well-lived life.

The last half-century of Western history has witnessed the shattering of an old consensus on the proper ends and means of education.

This is especially true when it comes to “higher education,” which in many quarters has become a synonym for narrow (and very expensive) job training—training which, ironically, often turns out to be hopelessly dated before one’s career is off the ground.

Institutions like Christendom College, however, have remained standard-bearers for the traditional notion that liberal education is far and away the best preparation for a well-lived life.

Through liberal education, a young man or woman develops a refined intellect and a cultured soul, coming to possess that precious gift which Cardinal Newman famously called the “philosophical habit of mind.”

Among institutions that cultivate a traditional understanding of liberal education, Christendom College has long been distinguished by its commitment to the study of history.

Our contention is that historical studies play an absolutely essential role in the formation of liberally educated men and women; without them, the student of humanities or philosophy is left adrift, studying texts without contexts.

It is an absurd enterprise to try making sense of Plato’s Republic while knowing nothing about the Peloponnesian War or the broader history of ancient Athens, just as one cannot understand Dante while blissfully ignorant of the medieval church, or comment intelligently on T.S. Eliot while knowing nothing of the twentieth century.

In short, we argue that truly reaping the benefits of the Western intellectual tradition requires some acquaintance with the civilization that produced this tradition.

To speak more broadly, liberal education (especially as it has been understood by Catholics) involves a harmonious marriage of humanistic and scientific studies.

On the scientific side, one expects the liberally educated man to have a firm grasp of mathematics, nature, and metaphysics, to understand the world, man’s place in it, and ultimately God.

On the humanistic side, we would hope that he is cultured enough to have read Homer and Aeschylus, Augustine and Boethius, Shakespeare and Milton, Eliot and Waugh.  If humanistic studies are going to support the more speculative and scientific aspects of a student’s intellectual formation, historical study is absolutely essential.

Historical study allows the student of literature to appreciate the preservation of memories and oral traditions in Homer’s epics, composed centuries after the events they commemorate.

It allows him to understand medieval chansons de geste against the backdrop of the great monastic reform movements which had such a profound impact on the culture of European knights and aristocrats.

Examples like this could be multiplied almost endlessly, but of course one might still legitimately ask what role historical studies play in enhancing a student’s education in philosophy or theology (disciplines that modernity lumps in with the humanities, but are actually scientific in the purest sense).

In response to this last question, one should note that although philosophy and theology transcend the specific circumstances of time and place, they have always been pursued by men and women operating within a context.

In order to truly distinguish the perennial from the contingent, an acquaintance with history is essential.

For example, grasping Plato’s ethical insights is much easier when one is familiar with the peculiarities of the ancient Greek city-state, or polis, while the more expansive moral imperatives of the Stoic philosophers make sense in light of their very different historical context, after Alexander the Great’s conquests had dramatically broadened the political and social horizons of the Greek world.

Theology has a history as well: if we expect students to really understand the difference between homoousios and homoiousios, then we must ground them in the world of the fourth century church, while if they are to grasp Luther’s polemics against indulgences or the sacramental system, familiarity with late medieval ecclesiastical history is absolutely critical.

Part of what this all means is that education in history, at the undergraduate level, does not consist solely in reading “history books,” or listening passively to narrative lectures.

It consists, rather, in learning how to do what historians do—reading primary sources critically, weighing different interpretations of an event against one another, learning how to account for one’s own biases, and ultimately being able to bring the world of the past to life.

The study of history is arduous and rewarding; it produces men and women who have a vivid sense of what it means to be a Christian, a Catholic, and an heir to Greece, Rome, and Israel.

For a young Catholic, the study of history ought to take on an even more special significance.  The mysteries of the life of our Incarnate God were lived out within a specific historical context, in a world where diverse populations were united by Greek culture and Roman statecraft.

The Church that He founded has carried out her mission in history.

We neglect this history at our peril.