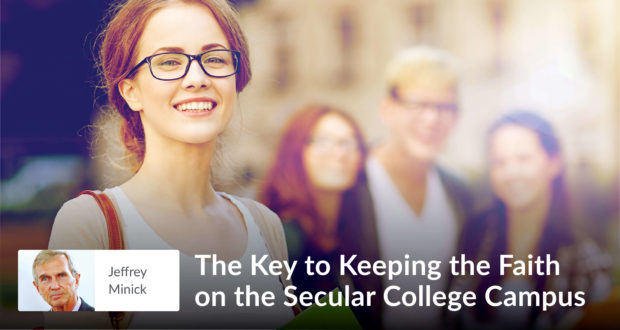 The Key to Keeping the Faith on the Secular College Campus

Jeff Minick has gathered intel on improving the chance that your college student will grow strong in their Catholic Faith rather than losing it at college.

The milestone has arrived.

Your twins, Mary and Michael, high school juniors whom you’ve educated at home and schooled in the Faith, are debating which colleges and universities they hope to attend after graduation.

If they’re exploring admission into a solid Catholic school, then you might direct them to The Newman Guide to Choosing a Catholic College, 2017-2018.

Published by the Cardinal Newman Society, whose mission is to promote and defend faithful Catholic education, this guide examines 18 Catholic colleges that have remained true to the magisterium of the Catholic Church.

In their investigation of institutions, ranging from Christendom College to Franciscan University, the editors of this guide have collected reams of data, ranging from the SAT scores of entering freshmen to the number of days adoration and confession are offered.

But suppose Mary and Michael don’t attend one of these Catholic colleges. Maybe a secular school has offered them a lucrative scholarship based on their academic or athletic talents. Maybe they want to remain close to home. Maybe they hope to attend Mom or Dad’s alma mater.

Whatever the case, you understand their reasons—perhaps, you even encourage them to go to the state university or private college that has rolled out the red carpet for them—but you worry about their Faith.

You’ve known families whose children have attended these same sorts of educational institutions, solid Catholic families who homeschooled their children or put them through an acclaimed Catholic secondary school, and you’ve seen those children fall away from their Faith by the time they graduate from college. You wonder whether the twins might also lose their Faith.

What can you do to help them meet the challenges and temptations they will encounter in such a place?

First is prayer. When the twins depart for college, pick a time of day, and tell the twins you intend to devote those minutes to prayer on their behalf. Encourage them to use that time for prayer as well. Resist becoming a helicopter parent, but when you phone them, remind them of holy days and of the importance of Mass and confession. Make a point of calling on special feast days.

Next, look closely at the college.

While it’s important to examine a school’s academic and extracurricular programs for Mary and Michael, it’s equally important to look at what support the school offers its Catholic students. When you visit that school, take the campus tour, meet students and professors, and talk to admissions officers. While on campus, however, step beyond the standard tour and inquire about Catholic student organizations.

Does the university have a Newman Center? Is there a Catholic Campus Ministry? Is FOCUS (Fellowship of Catholic University Students) involved in these ministries?

A university’s Newman Center derives its name from John Henry Newman, a convert to the Catholic faith, a cardinal beatified by Pope Benedict, and a prolific writer best known for his autobiography, Apologia Pro Vita Sua, and for The Idea of a University.

You discover the university the twins wish to attend does have such a Center. Now you dig for the details.

Is there a resident priest associated with the Center? Does he offer daily Mass? Are times for confession and adoration regularly scheduled? Is there a support staff, religious or lay, involved with the Center? Is there a FOCUS team on campus? (FOCUS is a Catholic missionary team of recent college graduates, usually four in number, whose mission is “to share the hope and joy of the Gospel with college and university students.”)

And don’t neglect the social aspects of the Center. Mary and Michael will be looking for friends that first year, for fellowship and a quiet place to study. How many students participate in events held at the Center? Does the staff sponsor retreats, Bible study groups, speakers, and volunteer opportunities? Does it organize other social activities, like picnics, ski trips, and dinners?

To get a feel for the excellent services a Newman Center can provide, visit “50 Best College Newman Centers” online. Here, you will find vibrant communities immersed in all aspects of the Faith. An example: the Saint Robert Bellarmine Chapel and Catholic Student Center at Virginia’s George Mason University has a gathering hall, kitchen, lounge, and library, and touts its Center as a community where students grow in their faith and as “a safe place to study.”

The highly regarded Newman Center at the University of Illinois Urbana-Chicago, ranked #1 by this study and considered a model Newman Center by many observers, offers not only daily Mass but the traditional liturgy.

“50 Best College Newman Centers” is a wonderful help, but don’t be dismayed if the school Mary and Michael wish to attend is absent from the list. Saint Mary’s Catholic Center at Texas A&M didn’t make the cut, yet a 2017 Seton Home Study graduate from Illinois reported she attended A&M for two reasons: its excellent engineering program and its outstanding Catholic Center.

Newman Centers not only provide spiritual sustenance for Catholics on a secular campus, but they have also given the Church many vocations. Father Bryce Sibley, for example, pastor for six years at Our Lady of Wisdom Church and Catholic Student Center at the University of Louisiana at Lafayette, reports 47 students who have participated in the Center have entered the priesthood or the religious life.

At the Saint Thomas Aquinas Church and Newman Center at the University of Nebraska-Lincoln, Father Robert Matya, pastor for 19 years, has watched student Mass attendance grow from 400 to 2400. In the same time, over one hundred young people have entered the religious life. The Center has a regular staff of eight, but Father Matya credits much of the growth to ten FOCUS missionaries on campus.

One caveat: the mere presence of a Newman Center is no guarantee of a thriving Catholic campus faith. It is imperative to explore the Newman Center’s website for Mary and Michael’s college. Sometimes, the priest’s homilies are included here. Much can also be discovered by looking at the different programs taking place at the Center.

Best of all is a visit to the Center while on your campus tour. Talk to the priests and the staff. Ask about the number of students who attend daily Mass or who participate in the Center’s social life. Inquire as to whether the Newman Center offers any special outreach to freshmen. Attend a daily Mass. Visit the adoration chapel. A few hours of research can give you the assurance that your students will find a Catholic home at the university they’ve chosen.

The importance of a good Newman Center is obvious from some comments students post online. “I’d probably be falling apart without my Newman house,” writes one young woman. A male student from a different university applauds her comment, adding, “If it weren’t for Newman, I don’t know how I’d make it through the week.”

The sacraments, the support, the fellowship, and often, life-long friendships: these are the bountiful gifts of a Newman Center.