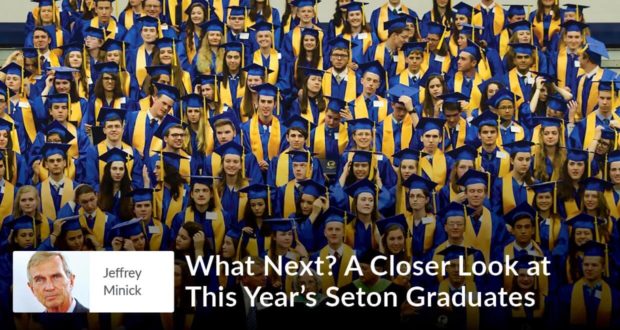 What Next? A Closer Look at This Year’s Seton Graduates

Seton Counselor Jeff Minick chatted with several of the graduates at the Seton Graduation in Front Royal, Virginia and was inspired by their future plans.

Stiff winds, rain-soaked grass, and a grey sky were no match for the exuberance of the 130 Seton Home Study graduates and their families and friends who gathered in Front Royal the last weekend in May to celebrate commencement.

On Friday, the graduates attended a Family Fest at Seton, where they took guided tours of the facilities, met counselors and administrators, and visited on the lawn while enjoying pizza, soft drinks, and other treats. The younger set delighted in the pony rides and the inflatable bounce houses while the older students kicked soccer balls, passed footballs, and tried their hand at cornhole.

On Saturday, the graduates and their families—the crowd ran to over 1,000 people—filled the auditorium of Skyline High School. Following a moment of silence for Father Constantine, who served Seton for over twenty years before passing away this fall, Father Vincent Bork offered the invocation.

Rich Walker, a Seton Board member, delivered the opening remarks and acted as master of ceremonies for the event. Dr. Mary Kay Clark spoke to the graduates and their families about the importance of carrying their Catholic faith into the world, encouraging them to become more involved politically in their communities.

In his commencement address, Joseph Pearce, biographer of such Catholic writers as J.R.R. Tolkien and G.K. Chesterton, reminded his listeners of the importance of the humanities in our lives, stating that “a good education is health food for the mind and soul” and that continuing such an education should be a life-long ambition.

Deacon Gene McGuirk, head of Seton’s counseling department, awarded the diplomas and gave the closing benediction. The festivities celebrating the end of high school for these students concluded with a catered reception and a family dance in the Skyline gymnasium.

But commencement, of course, means not an ending but a beginning, and the plans and dreams of these students were as varied as their personalities. I had the pleasure of speaking with several of the graduates at the Graduation weekend and was inspired by their future plans.

Sebastian Ohmer, for example, son of Marc and Michele of New York and oldest brother of five younger siblings, is off to Binghamton University to study neuroscience. He credits Seton’s math and science courses for preparing him for this challenge.

Peter Wilson, son of Larry and Michelle and the oldest brother of seven siblings, will enter Franciscan University, where he hopes to double major in economics and finance.

Michelina Eng, daughter of Marcellina and John of New Windsor, New York, first enrolled in Seton as a kindergartener. She has her eye on the fashion world. When asked whether she had designed any clothing, she laughed. “I made this dress,” she said, pointing to her lovely, purple swirled outfit.

In contrast to Michelina, who spent her entire elementary and secondary education with Seton, homeschooler Olivia Asso- Gonzalez entered the Seton program as a senior, looking for more structure and accreditation. Olivia is working for a year before entering school to become a physical therapist.

Kathryn Moore of Illinois, daughter of Don and Nancy and the oldest of four girls, is off to Texas A&M University to study architecture. She considered a number of colleges, all of which, she said, knew and spoke highly of Seton.

“I chose Texas A&M for several reasons,” she said. “It’s more conservative than some of the other schools. It has a great Catholic center, one of the top-ranked in the nation, and an extensive alumni network.”

After granting her admission, Miss Moore further explained, Texas A&M informed her she must pay out-of-state tuition, an amount beyond her means. She called the head of the architecture school, explained her situation and why she wanted to attend Texas A&M, and received a return call a week later offering her admittance as an in-state student along with other financial help. Persistence and grit are byproducts of a Seton education.

Many other graduates are off to Catholic colleges and universities, institutions such as Christendom, Franciscan, Thomas Aquinas, and Belmont Abby. Joseph Gerardi will attend the United States Military Academy. Others intend to study subjects as varied as herpetology, kinesiology, and graphic design. Finally, five of the graduates in attendance plan to enter the priesthood or religious life.

The written program for the commencement exercises included brief biographies of the students, listing their plans and their accomplishments. With their dreams and their dizzying array of talents, these young people and the many graduates unable to attend the ceremony offer wonderful gifts to a fallen world.

Jeff Minick is the Latin Counselor at Seton Home Study School. He has spent the last twenty-five years teaching Henle Latin to his children and hundreds of home-educated students, guiding many through their preparation for the Advanced Placement Latin examination. Jeff is the father of four children, all of whom were homeschooled, and grandfather to twenty-one grandchildren, three of whom he homeschools.
2017graduation biographies catholic colleges colleges commencement ceremony dr. clark family dance family fest future plans gene mcguirk graduates joseph pearce plans and dreams 2017-07-12
Contributing Writers