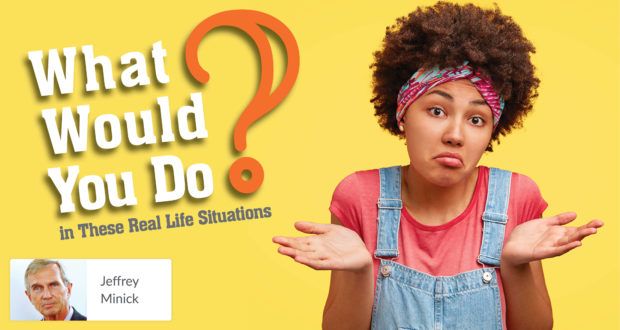 What Would You Do in These Real Life Situations?

Jeff Minnick shows that life’s awkward situations are rich opportunities for you to evangelize based on these real experiences and the words of St. Paul.

You’re in college, enrolled in an English literature class, and the teacher decides to show the class a film you regard as pornographic.

You attend a history class in which the professor repeatedly attacks the Catholic Church as an impediment to human progress.

In your political science class, the professor mocks students who are opposed to abortion and euthanasia, or who support the Constitution and a free market economy.

Such incidents are not figments of the imagination. College students, including Seton Home Study School graduates, often face such confrontations in and out of the classroom.

So what will you do if you find yourself in such a situation?

Responding to These Situations

You have several choices.

You can remain silent, write papers that reflect the professor’s bias, and move along. (Do this, and you diminish your self-respect and your soul.)

You can protest a teacher’s behavior to the Dean of Students. If you take this route, it is imperative that you first voice your objections directly to the teacher. Otherwise, you appear to be stabbing the professor in the back.

One Seton graduate judged a film shown in class as pornographic and wrote a letter to the Dean. The Dean issued a verbal reprimand to the professor, who in turn smeared the student’s reputation among her colleagues through emails and gossip, labeling him a “hater” and a threat to the college.

Next, you can voice your objections in class, defend them, and let the chips fall where they may. To defend the Faith, or for that matter any of your other beliefs, you need to understand that you may offend the professor. As one Seton graduate wrote, who several times stood fast in college for the Faith,

“There is a difference between being liked and being respected by a professor. Naturally, you want both, but sometimes you have to be willing to sacrifice being liked. I have found teachers can respect you for taking a principled stand, but in disagreeing with them, they may cease to like you. Christ talks about being despised for His sake. Well, now is the chance.”

Finally, you can ask questions.

Let’s say a professor of history tells the class that the Crusades occurred because Europe’s nobility only wanted wealth and riches. Ask him about whether they attained that wealth. (Many crusaders lost great sums of money as well as their lives.) Ask him why they launched the Crusades in the first place. Ask him what role religion played in their march to the East.

Ask such questions with sincerity and humility, with respect and a genuine curiosity as to why the professor is making such an argument.

Finally, you can prepare for these confrontations, both in and out of the classroom, by better understanding the culture beyond your home and Catholic community.

The Armor of God

Some fifteen years ago, speaking at a Seton conference, Dr. Patrick Keats of Christendom College remarked that in addition to reading books on Catholic saints and the Catholic faith, students should prepare for college by broadening their cultural horizons.

He encouraged young people to keep up with the news, to read widely in history and literature, and to understand, particularly if they go to secular colleges, that many of their peers will be worlds apart from them in terms of faith and culture.

We Catholics are called to carry our Faith to the world, including colleges and universities. To do so most effectively, we must understand that world. In the Book of Acts, Saint Paul attempts to convert the men and women of Athens by first presenting certain concepts like salvation and eternal life before explaining how Christ made these possibilities into realities. He knew his audience and how to reach them.

“Put on the whole armor of God, so that you may be able to stand against the wiles of the devil.”

Knowledge, a cool head, and a brave heart: that is your armor. Have it ready when you enter the classroom.

Jeff Minick is the Latin Counselor at Seton Home Study School. He has spent the last twenty-five years teaching Henle Latin to his children and hundreds of home-educated students, guiding many through their preparation for the Advanced Placement Latin examination. Jeff is the father of four children, all of whom were homeschooled, and grandfather to twenty-one grandchildren, three of whom he homeschools.
armor of God ask question brave heart classroom college confrontation crusades defend the faith dr keats dr patrick keats faith jeff jeff-minick keats knowledge minick paul prepare professor protest questions saint paul stand up for your beliefs 2018-09-11
Contributing Writers