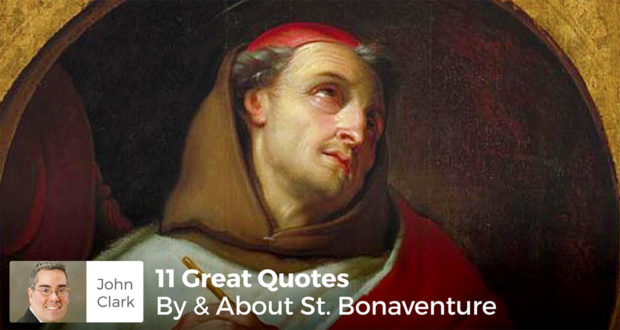 11 Great Quotes By & About St. Bonaventure

Legend has it that St. Bonaventure was saved and given his name by another famous saint. John Clark introduces the Seraphic Doctor with 11 inspiring quotes.

The legend is told that in the early decades of the 13th Century, a mother was grieving terribly that her young son, John, was becoming increasingly sick and looked as though he were going to die.

When his mother arrived in the company of Francis, the saint raised John’s little body to Heaven, asking God for a miracle. After his prayer, Francis was assured that the young boy had been healed, but then something quite unexpected happened.

As Francis handed John back to his mother, Francis received a flash of prophecy about the enormously holy and wonderful life that this child would live. Francis stared into John’s eyes and exclaimed: “O buona ventura!” (“Oh, good fortune!”)

The name stuck. From then on, the child was no longer named “John,” but “Bonaventure.” Today, the Roman Catholic Church celebrates Saint Bonaventure’s feast day.

Though some historians doubt the precise validity of this story, Bonaventure himself writes that he was deathly ill as a child, but through the intercession of Saint Francis, he was completely restored to health. Bonaventure goes so far as to write that he was “snatched from the jaws of death” through Francis’ intercession.

Whether or not the story happened verbatim, we won’t know until we are in the company of Francis and Bonaventure. But we can assuredly look back today on Saint Bonaventure’s life and proclaim, along with the vast choirs of Heaven and the universal Church: “O buona ventura!” because his life and works were good fortune for the Church.

Bonaventure has also been awarded an accolade that has been granted to fewer than three dozen people in the totality of ecclesiastical history: “Doctor of the Church.”

Today, let’s take a few moments to ponder this extraordinary man’s life and his writings, and ask for his intercession and the intercession of Saint Francis.

Below are some of Bonaventure’s writings, along with some things that his contemporaries and biographers have said about him. Good fortune, indeed.

“Thy beauty astonishes the sun and the moon; the angelic powers serve and obey thee. By thy gentle touch the sick are healed: by thy rose-sweet fragrance the dead revive.” – Saint Bonaventure, The Psalter of the Blessed Virgin Mary

“Thomas (Aquinas) was the teacher of the schools, Bonaventure of practical life; Thomas enlightened the mind, Bonaventure inflamed the heart; Thomas extended the Kingdom of God by the love of theology, Bonaventure by the theology of love. Even those who hold that Bonaventure does not reach the level of St. Thomas in the sphere of Scholastic speculation concede that as a mystic he far surpasses the Angelic Doctor.” – The Catholic Encyclopedia

“(T)he judgments of God have terrified me. The darkness of death has overtaken me: and the fear of hell has invaded me. But in solitude I will expect thy consolation: and in my chamber I will wait for thy mercy.” – Saint Bonaventure, The Psalter of the Blessed Virgin Mary

“Bonaventure was great in learning, but no less great in humility and holiness. His innocence and dove-like simplicity were such that Alexander of Hales, the renowned doctor whose disciple Saint Bonaventure became, used to say of him that it seemed as though Adam had never sinned in him.” – Pope Sixtus IV, Bull of Canonization

“The proud demons flee before the lofty virtues of the humble.” – Saint Bonaventure, The Life of Saint Francis

For there was in St. Bonaventure something preeminent and unique, so that he stood out not only in subtlety of arguing, in facility of teaching, in cleverness of defining, but he excelled in a certain divine strength of thoroughly stirring up souls. For in writing with the greatest erudition he so conjoined an equal ardor of piety, that he would move the reader by teaching and it would sink into the recesses of the soul, and then he would prick the heart with certain seraphic stings and it would pour forth with a wonderful sweetness of devotion; admiring which grace poured out upon his mouth and pen, Our precedessor the Pontiff Sixtus IV, had no doubts in saying, that the Holy Spirit seemed to have spoken in him. – Pope Sixtus V, Triumphantis Hierusalem

“(N)o one can become blessed, unless he ascends above his very self, not by an ascent with the body, but with the heart.” – Saint Bonaventure, The Journey of the Mind Into God

“As well as being a seeker of God, St. Bonaventure was the seraphic poet of creation.” – Pope Benedict XVI

“An anonymous papal notary composed a eulogy to Bonaventure which gives us a conclusive portrait of this great Saint and excellent theologian. ‘A good, affable, devout and compassionate man, full of virtue, beloved of God and human beings alike…. God in fact had bestowed upon him such grace that all who saw him were pervaded by a love that their hearts could not conceal.’” – Pope Benedict XVI

“If you do not know your own dignity and condition, you cannot value anything at its proper worth.” – Saint Bonaventure, Holiness of Life