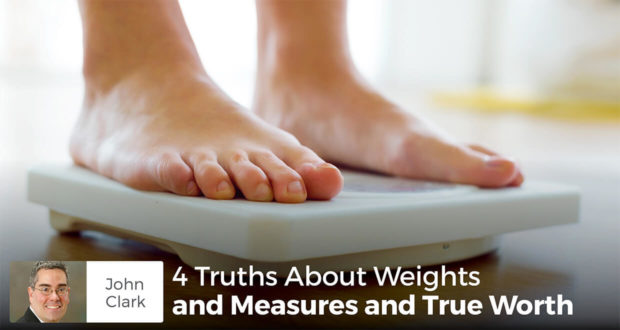 4 Truths About Weights and Measures and True Worth

After a year of losing weight, John Clark looks back on his successes and frustrations, and cautions that we often overemphasize the physical appearance.

At the beginning of this year, I stepped into a blood pressure kiosk to check my systolic and diastolic numbers.

Unsatisfied—and frankly, a bit troubled—with the results, I resolved to lose some weight. Long story short, here I am ten months or so later, having lost over fifty pounds.

This has not gone unnoticed by friends and associates, who comment about my weight and are full of compliments. They ask me how I have done it, or how much weight I have lost. By far, the most common response I have received is: “You look (X number of years) younger.” And solving for X has apparently been the discrepancy. When I had lost about forty pounds, someone told me that I looked twenty years younger.

As I passed the fifty-pound milestone, another remarked that I looked twenty-five years younger. Twenty-five years! This was flattering until I started doing some math.

Assuming that I looked my age (45) when I began this diet, that would put me at twenty-years-old right now. More likely, that leads me to a different conclusion: when I started my diet, I looked about seventy years old.

But all of these comments, well-intentioned though they certainly were, really got me thinking about weights and measures, and how we see things in America.

Cicero is attributed with writing: “Times are bad. Children no longer obey their parents, and everyone is writing a book.” If Cicero’s lament was right about books generally, then his thoughts go double for weight loss books.

What works for me may not work for you and vice versa. For instance, I have had a vanilla latte for breakfast almost every single day I have been on my diet. I doubt that would work for most people. And diet books that say some version of “Just do X and it will all work out” are not terribly helpful, or honest.

Second, we’re not empathetic enough with people who have a hard time losing weight.

Sometimes, the rich criticize the poor for being poor, without having any idea how hard poor people often work just to get by. The same thing often happens with body composition. Thin people sometimes make assumptions about those who are not thin, without having the foggiest idea how hard it is for some people to lose weight or keep weight off due to health problems or dozens of other reasons. For many people, it’s a daily struggle, and a lifelong one at that.

Third, in America, we greatly overemphasize the discussion of weight.

For the most part, I guess I’m happy that people congratulate me for losing weight, but I’ll let you in on a little secret: I’m a lot happier when they congratulate me for something a little more real and a little more important.  And I’ve come to a greater realization that we need to congratulate others more often for their achievements that go well beyond the physical.  Losing weight may be an achievement, but it pales in comparison with going to daily Mass, or helping our kids with math, or lots of other things.  When is the last time you congratulated someone for going to daily Mass?

Fourth and most important:

If we look at the body and see anything less than beauty, that is our deficiency, not God’s. God made the body beautiful—no asterisk, no footnote, no exception.Beautiful. And there’s not a scale in the world that can change that wonderful fact.

C. S. Lewis wrote that, while it is said that we humans consist of a body with a soul, it is more proper to say that we consist of a soul with a body. That is where our emphasis, for our children and for ourselves, must remain. Our weight, like all our physical characteristics, has exactly zero to do with our worth before God, Who has already weighed in with the fact that He loves us.

We fathers must not fail to pass this lesson on to our children.