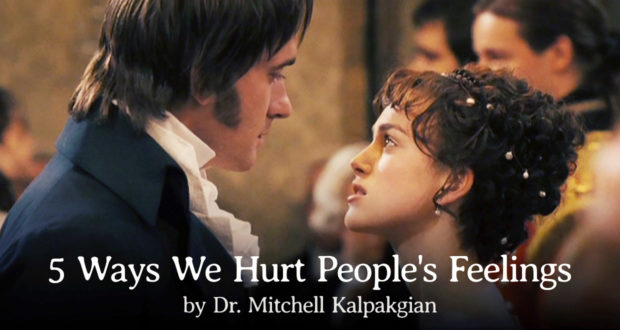 A mark of civility that reflects the height of good manners is the effort to avoid hurting people’s feelings. Just as all human beings suffer physical pain in their bodies, so also they experience hurt feelings when a lack of courtesy overlooks their natural human sensitivities.

Those who bear hurt feelings do not fall into the category of the touchy, peevish, or irritable who take offense when none is intended. Instead they react with natural disappointment at thoughtless insensitivity on the part of many who lack tact.

People hurt the feelings of others by what they say or do not say, by what they promise but fail to do, by receiving letters which they never answer, and by the way they extend friendship or express fondness but do it insincerely and mean nothing by it.

Jane Austen explores this breach of civility in all of her novels and observes the many ways that men and women commit this offense while feeling innocent of any violation of good manners.

In Pride and Prejudice Caroline Bingley, the sister of a gentleman whose fondness for Jane Bennet hints of romance and marriage, urges Jane to pay her a visit when Jane comes to London, but her words carry no sincerity.

After their introduction at a ball and the beginnings of friendship, Caroline communicates a warm cordiality toward Jane, primarily because of her brother’s attraction to her. When the Bingleys suddenly depart for London, Caroline writes, “I do not pretend to regret anything I shall leave in Hertfordshire, except your society, my dearest friend.”

Caroline hopes to cultivate their relationship “by a very frequent and most unreserved correspondence.” But she makes promises she never intends to keep—glib words without kind deeds.

After Jane visits London and writes to Caroline about paying a visit, she receives no reply or notice even after a week. When Jane eventually goes on her own initiative to see her friend, presuming that Caroline never received her letter, she writes to her sister Elizabeth that “she [Caroline] was very glad to see me, and reproached me for giving no notice of my coming to London”—an excuse invented to justify her neglect and inattention because Jane had written her a letter.

Caroline promises to return the visit soon, but Jane waits two weeks before seeing Caroline whose visit amounts to a mere formality. Her coming and going are short and abrupt. Jane writes, “Caroline did not return my visit till yesterday; and not a note, not a line, did I receive in the mean time. When she did come, it was very evident that she had no pleasure in it.”

When Caroline takes her leave, she never mentions the thought of seeing Jane again. Caroline Bingley hurts Jane Bennet’s feelings by ignoring her–even with the knowledge that she is in town and anticipates a visit. Caroline never responds to a letter she received. She hurts Jane’s feelings by rejecting her as someone whose social class and family income do not qualify her for courtship with her brother.

Caroline hurts Jane’s feelings by her duplicity, by feigning friendship and affection that she does not feel.

Jane’s sister Elizabeth suffers a similar experience. Mr. Wickham, a soldier with polished manners and engaging conversation, charms Elizabeth with his attention and gives every impression of attraction and interest. She praises him to her aunt as “the most agreeable man I ever saw,” and she feels flattered by his preference for her.

She anticipates attracting him and encouraging an attachment. As Elizabeth prepares to attend the Netherfield ball, “She had dressed with more than usual care, and prepared in the highest spirits for the conquest of all that remained unsubdued of his heart, trusting that it was not more than might be won in the course of an evening.”

Elizabeth, however, learns from her aunt that Wickham has decided to court another woman: “The sudden acquisition of ten thousand pounds was the most remarkable charm of the young lady to whom he was rendering himself agreeable.”

Wickham hurts Elizabeth’s feelings by a show of gallant courtship followed by a sudden loss of interest. He encourages her only to betray her. He engages all her feelings, fills her with hope and expectations, and gives her special regard but then ends the relationship at the prospect of a more lucrative match.

To trifle with a person’s feelings in matters of love causes the greatest pain that hurts feelings.

Those who hurt someone’s feelings thoughtlessly trample on human sensibility with no apologies. They assume that they have not done any harm but simply had a change of mind or encountered complicating circumstances.

They act as if their self-interest demands prudence and they are without guilt or fault. They think that the victim of hurt feelings will easily recover, feel no resentment, and accept disappointment without grief. Nevertheless, these episodes of hurt feelings cause deep wounds, not slight discomforts.

Even though Elizabeth’s aunt mentions the commonness of these occurrences as “accidents” or the frequent “inconstancies” of the young, Elizabeth minces no words: “We do not suffer by accident.” Hurt feelings break people’s hearts and make them lose faith in the honorable intentions professed by others. Elizabeth remarks, “I am sick of them all.”

The glaring absence of integrity and good will and the lack of “sense and feeling” on the part of many she knows deeply trouble her. Without these virtues all human relationships suffer, and no friendships or romances continue or mature. Elizabeth is not overreacting, being delicate, or acting touchy but honestly expressing her emotions for good cause. She is offended because those who hurt others’ feelings presume that their victims do not care or quickly forget—as if they are lacking in normal human emotions.

Those who hurt others’ feelings act as if they can lead others on, give false impressions, raise expectations, dally with intimate feelings, and then not expect any consequences. They assume that no one suffers from a broken heart or a sense of betrayal.

Hurt feelings, however, can appear in disguise when frustration occurs. When Mr. Collins comes to offer his hand in marriage to Elizabeth to entitle her to a portion of the family estate that no female can inherit, he woos her without courtship or romance, approaching marriage as merely a social and economic arrangement devoid of affection.

Elizabeth adamantly refuses because she has no feelings of admiration or attraction, and he has not won her heart or proven himself worthy of her in any way to gain her esteem: “I am very sensible of the honour of your proposal, but it is impossible for me to do otherwise than to decline them.”

Rejected, Mr. Collins acts as if Elizabeth’s refusal of his offer is a personal affront and behaves as if she has hurt his feelings and behaves with “stiffness of manner and resentful silence” in her company. However, Elizabeth—unlike Caroline Bingley or Mr. Wickham—gave no impressions or hints of affection, interest, or friendliness to encourage romance. His peevish reaction amounts to childish petulance or over-delicate touchiness which the situation does not justify.

No lady or gentleman gives offense by word, deed, carelessness, or sins of omission that cause hurt feelings.