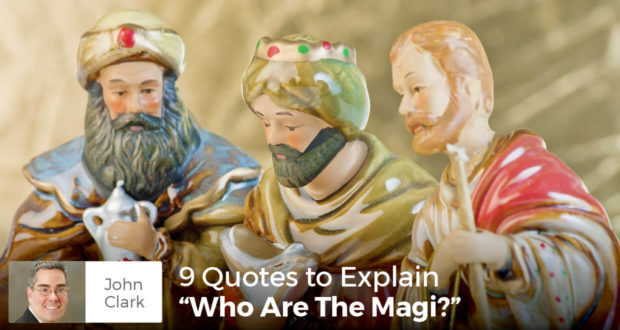 9 Quotes to Explain “Who Are The Magi?”

John Clark saw the Feast of Epiphany an opportunity to highlight a few quotes about the Three Wise Men, who “invented the art of giving Christmas presents”.

Though the Western Church celebrates the Feast of Epiphany on Sunday, today is the traditional feast day. So, today, it seems appropriate to highlight a few quotes by and about the Magi.

“The magi, as you know, were wise men—wonderfully wise men—who brought gifts to the Babe in the manger. They invented the art of giving Christmas presents.” –The Gift of the Magi, O. Henry “Though many kings of the Jews had been born and died, none of them did the Magi seek to adore. And so they who came from a distant foreign land to a kingdom that was entirely strange to them…But they had learnt that such a King was born that by adoring Him they might be sure of obtaining from Him the salvation which is of God.” – Saint Augustine “If the Magi had come in search of an earthly King, they would have been disconcerted at finding that they had taken the trouble to come such a long way for nothing. Consequently they would have neither adored nor offered gifts. But since they sought a heavenly King, though they found in Him no signs of royal pre-eminence, yet, content with the testimony of the star alone, they adored: for they saw a man, and they acknowledged God.” –Saint John Chrysostom “But if with careful thought we wish to see how their threefold kind of gift is also offered by all who come to Christ with the foot of faith, is not the same offering repeated in the hearts of true believers? For he that acknowledges Christ the King of the universe brings gold from the treasure of his heart: he that believes the Only-begotten of God to have united man’s true nature to Himself, offers myrrh; and he that confesses Him in no wise inferior to the Father’s majesty, worships Him in a manner with incense.” –Pope Saint Leo the Great “The men of whom Matthew speaks were not just astronomers. They were ‘wise.’ They represent the inner dynamic of religion towards self-transcendence, which involves a search for truth, a search for the true God and hence ‘philosophy’ in the original sense of the word. Wisdom, then, serves to purify the message of “science”: the rationality of that message does not remain at the level of the intellectual knowledge, but seeks understanding in its fullness, and so raises reason to its loftiest possibilities.”
–Pope Benedict XVI, Jesus of Nazareth: The Infancy Narratives “Coming to Bethlehem, they found ‘the child with Mary His mother’. After that of Jerusalem, this was their second great temptation: to reject this smallness. But instead, ‘they fell down and worshiped Him’, offering him their precious symbolic gifts. Again, it is the grace of the Holy Spirit which assists them. That grace, which through the star had called them and led them along the way, now lets them enter into the mystery.” –Pope Francis, Homily of 6 January 2014 “When they reached Bethlehem, the Magi adored the divine Child and offered him symbolic gifts, becoming forerunners of the peoples and nations which down the centuries never cease to seek and meet Christ.” –Pope John Paul II, Homily of 6 January 1996 “And thus we come to the star. What type of star was that which the Magi saw and followed? Throughout the centuries this question has been the object of discussions among astronomers. Kepler, for example, held that it was a “nova” or a “supernova,” that is, one of those stars that normally emanate a weak light, but which can have unexpectedly a violent internal explosion that produces an exceptional light. Certainly, interesting things, but which do not lead us to what is essential in order to understand that star….The universe is not the result of chance, as some would have us believe. Contemplating it, we are invited to read in it something profound: the wisdom of the Creator, the inexhaustible imagination of God, his infinite love for us.”
–Pope Benedict XVI, Homily of 6 January 2011 “Where is he who has been born king of the Jews? For we saw his star when it rose and have come to worship him.”
–Matthew 2:2 bethlehem child epiphany holy spirit infant Jesus kings magi mary mother school day start star wise men 2017-01-06
John Clark