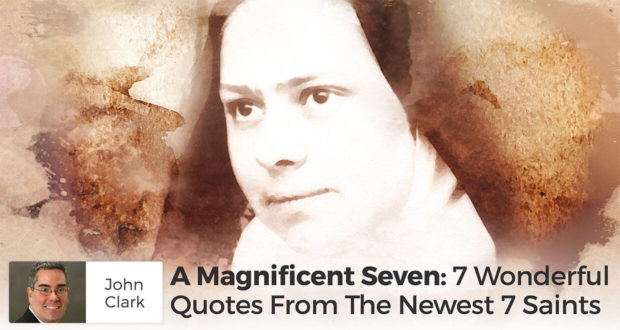 A Magnificent Seven: 7 Wonderful Quotes From The Newest 7 Saints

Pope Francis just canonized seven saints. John Clark takes a brief look at their lives and their immortal words that inspire Catholics around the world.

Just a few days ago, in what is becoming an enduring hallmark of his papacy, Pope Francis canonized another group of men and women.

Though they all lived unique lives, they were in some ways strikingly similar. In fact, studying their lives reminds one of Aristotle’s observation that “men are good in one way, but bad in many.” These men and women were good in one way: they loved God. Let’s stop for a moment and learn more about these magnificent seven and ask for their heavenly prayers.

Tortured and martyred at the age of fourteen by the Mexican government for the crime of refusing to renounce Christ, Jose Sanchez del Rio was a courageous angel amidst the cowardly devils who persecuted him. During his painful scourges of torture, Jose was assured that if he apostatized Christ, he would be released. Instead, his final answer inspired the Catholic resistance. And still does.

Father Salomone Le Clercq was a priest in eighteenth-century France who devoted his life to school teaching, concentrating on instructing students who were deemed difficult to teach by other educators. But perhaps his greatest lesson in life was found in his final moment.

After the advent of Christianity, totalitarianism has varied by time and place, but its historical and geographical constant is oppression of Catholics. In one of its more flagrant illustrations, the French Revolutionary government murdered Father Salomone Le Clercq after he refused to swear loyalty to the illegitimate and rabidly anti-Catholic government.

Quote: “I want to be like my teachers, the Brothers, following them in their piety, their austerity and their service to young people.”

Like Le Clercq, Father Pavoni saw the great need for education among the Italian youth of his day. He recognized that the evils of institutional poverty, crime, and rejection of the Catholic Faith were often the result of lack of meaningful education. For thirty years of his priesthood, he set out to change that, establishing vocational schools in the fields of book publishing, agriculture, carpentry, and shoemaking, welcoming everyone, but most notably the deaf, mute, and orphaned.

He was teaching crafts to many to whom society—including, in some cases, their own parents—had all but turned their backs. More important, he was teaching them their own inestimable worth in the eyes of God who loves them. Amidst a world that was growing increasingly hostile, Father was also teaching them mercy and compassion.

At the beatification of Father Pavoni, St. Pope John Paul II said that Pavoni like St. John Bosco after him, used encouraging and preventative methods; he preferred gentleness to severity. He used to say, “Rigorism keeps Heaven empty.”

Born in 1840, Father Brochero spent a lifetime seeking out the poor, sick, and destitute and bringing a message of God’s love, mercy, and forgiveness. Living in a time and place in Argentina when it was difficult for the less materially fortunate to travel to church, Father Brochero tirelessly and courageously brought the sacraments to them. Over the amazing five decades of his priesthood, Father Brochero traveled an almost miraculous number of miles—by mule—to spread the good news of the Gospel.

Along his journeys, he contracted leprosy (which he lived with for many years) and eventually lost both his sight and his hearing before his death, but not before he had won many friends and many victories for Christ.

Quote: “Woe if the devil is going to rob a soul from me!”

A few months after his ordination, Father Garcia went to visit a church in the town of Palomares del Rio. In the church, he saw a horrifying image that became seared into his heart and soul for the rest of his life. He saw that the wooden tabernacle in the church was not only filthy, but also had significant termite damage and was surrounded by cobwebs. Father Garcia was deeply saddened by the fact that the Blessed Sacrament was often neglected by men.

From that moment on, he knew what his life’s work must be—to promote devotion to the Eucharist. For the rest of his life, through writing, preaching, and inspiring, that is exactly what he did. Bishop Garcia came to be known as “The Bishop of the Tabernacle.”

Quote: “I ask to be buried next to a tabernacle, so that my bones, after death, as my tongue and my pen in life, are saying to those who pass: ‘There is Jesus!’”

Married in 1834, Aniello and Josephine Fusco were not blessed with the gift of a child for whom they hoped and prayed. After four years, they decided to visit the relics of Saint Alphonsus Liguori in the town of Pagani to ask the great saint for his intercession. At their pilgrimage, they met a priest who informed them: “You will have a son; you will name him Alfonso; he will become a priest and will live the life of Blessed Alfonso.”

The next year, little Alfonso Fusco was born.

Like Father Pavoni, Alfonso recognized his vocation to the priesthood and quickly realized his calling to help educate poor orphans. With a group of religious sisters, he helped found The Congregation of the Baptistine Sisters of the Nazarene, which cared for orphans.

Pope Saint John Paul II, who called Father Alfonso “The Don Bosco of southern Italy,” reminds us of the enduring nature of his work, writing: “From a simple house for the welcome of the young, there arose a whole Congregation which today is present in sixteen countries and on four continents working alongside those who are ‘little’ ones and ‘last.’”

Quote: “Daughters, if you live in poverty, in chastity and in obedience, you will shine like the stars up in the heavens.”

When examining the life of Saint Elizabeth Catez, one struggles to find a contrast with St. Therese of Lisieux. Both lost a parent at a very young age, both were tempestuous young girls, both exhibited an ethereal affection for God, both became Carmelites, both were profound spiritual writers, and both died in their mid-twenties.

Even their spirituality, perhaps most especially in their total rejection of Jansenism—in the way they wrote and the way they lived their lives—was quite similar. The contrast may have not been so much in how they lived their lives, but in how the world viewed them after death; whereas the Little Flower has been read and admired for many years, the Western world has been largely ignorant of the life of Saint Elizabeth Catez, known as Elizabeth of the Trinity. Until now.

Quote: “It seems to me that I have found my Heaven on Earth, because my Heaven is you, my God, and you are in my soul.”