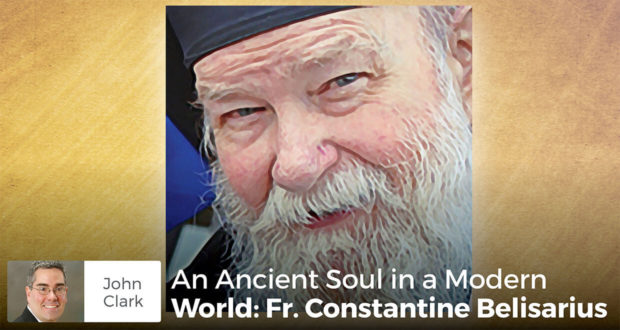 An Ancient Soul in a Modern World: Fr. Constantine Belisarius

As some of you already know, Father Constantine Belisarius, the chaplain of Seton Home Study School, was very sick lately.

Without going into his medical history, suffice it to say that we weren’t sure whether Father was going to make it. But with the help of many prayers and penances of friends and family, he is, by God’s grace, on the road to recovery.

Our Faith teaches us that God always brings something good out of something bad. Speaking for myself and perhaps many others, part of the “something good” was our chance for reflection and thanksgiving for Father.

In life’s dramatic dramas, we seem to lack the time to center on things that matter. But as I sat in the waiting room, waiting for a miracle, I had the chance to reflect a bit. And if you readers will indulge me, I want to express a few thoughts about Father Constantine.

That should be easy to do. It isn’t.

You see, Father Constantine Belisarius is more unique than his name. He is a priest, confessor, theologian, counselor, confidant, scholar, teacher, and spiritual warrior. And yet, when I think about Father Constantine, one quality pervades: he is my friend. And that is no mere footnote.

As C. S. Lewis wrote, “Friendship is unnecessary, like philosophy, like art…. It has no survival value; rather it is one of those things which give value to survival.”

Father Constantine gives life to those words. When you are Catholic, a friend is one who reminds you of the beauty of the True Faith; Father does that in a majestically Byzantine way. Obviously, I never knew a Father of the Church—I missed out on that privilege by about sixteen hundred years.

And yet, after a quarter-century friendship with Father Constantine, I sometimes feel as though I do know one of them; after all, in his research and reading, Father Constantine spends so much time with the Church fathers.

He quotes St. Basil and Saint Athanasius off-the-cuff as though they are his contemporaries—as though he is theirs. The calendar might say 2016, but for Father Constantine, for all intents and purposes it is 313, when his namesake walked the earth.

When he talks about the Council of Nicea, for instance, he speaks like a paperboy announcing the headline on a street corner. That’s cool, and it’s a reminder of the timelessness of truth.

Father is orthodox and by-the-book, but also wonderfully aware of God’s mercy, and is gifted to communicate that mercy in a magnificent way. Father Constantine once delivered a sermon about the sacrament of Penance and its relation to divine judgment. He said that the devil will be at our final, personal judgement and say: “Look at everything this man has done. He has committed that sin and these sins and those sins.”

And God will remind the devil: “He told Me about all those. What else do you have?” And the devil will fall silent.

In a world that’s not too funny sometimes, friends also make you laugh. I wonder if Father Constantine ever realizes how great his sense of humor is—and not always when he’s trying to have one.

Having been weaned on the Western Canon, I consider myself pretty well-read; however, Father presumes a working knowledge of an immense swath of data. Over the years, Father and I will be talking about history, theology or literature, and he will mention some nearly unknown fact and is bewildered that I am not aware of it.

When times get tough, I seek Father’s advice. He defends me when I am right; he tells me when I am wrong. That’s what friends do.

Years ago, as I was recounting the names of my children (which include Athanasius, Demetrius, and Tarcisius), I asked Father if those name choices meant I was crazy. He paused for moment and assured me: “No. It means you’re a man of faith.”

When Father Constantine—a man with a Dantean aversion to idle praise—says those words, you remember them. Much more importantly, you strive the rest of your life to live up to them.

For those of you on the Seton Home Study program, you may already know that Father Constantine is a counselor to the parents and the students. Perhaps you have already spoken with him by phone.

But whether you need some help with Latin, the advice of a wise priest, or some words of encouragement, you will discover a friend on the other end of the phone.