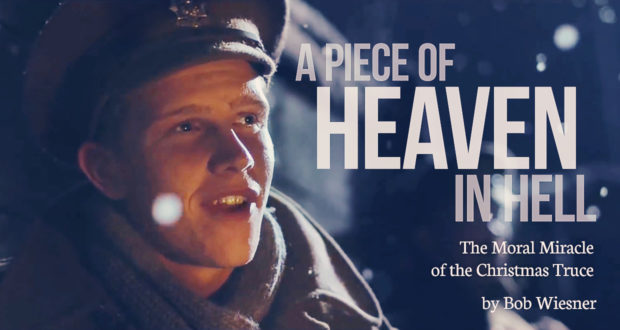 A Piece of Heaven in Hell: The Moral Miracle of the Christmas Truce

December 1914: The war of maneuver in Europe had already become the stalemate of the trenches. Millions of soldiers, French English, Bavarian, Swabian, Scots and so many others, suffered the danger, discomfort, mud and cold of living in badly constructed holes in the frozen ground.

The war that was to end in a matter of weeks had become a war that would drag on for four more horrible years. And yet, in the midst of the misery, a moral miracle occurred with virtually no precedent: the Christmas truce of 1914.

No one knows for certain just how it began, but many accounts speak of the strains of Stille Nacht (Silent Night) coming from the German trenches early on Christmas Eve. A group of Scots Highlanders responded by singing the carol in English. Soon enough, Adeste Fideles rang out with both sides joining in the Latin hymn.

A German officer was heard to plead for no more shooting this night or the day after. Junior officers met in the devastation of No-Man’s Land between the trenches and agreed upon a truce, a truce sanctioned by no one in higher command save God Himself. One estimate of the numbers involved gives a figure of no fewer than one hundred thousand soldiers!

In virtually no time at all, groups of soldiers from both sides began to congregate between the trenches, exchanging souvenirs and gifts, coffee and tobacco; bottles of whiskey and Schnapps soon appeared, followed by delicacies from the Christmas packages from home. A soccer ball was found, triggering a match which most agree was won by the Germans, 3-2.

More soberly, the chaplains from each army met and jointly provided decent burial for all the dead between the lines who could be recovered at no other time. Arrangements were made for proper Christmas services to be held, both Catholic and Protestant. Ruined barns were soon transformed into chapels; efforts were made to decorate and insulate against the pervasive cold. Unbelievably, soldiers from several warring states peaceably celebrated the Savior’s birth together in complete harmony!

Of course, generals were outraged and at least one priest was severely reprimanded by his bishop and sent home to England. Some courts-martial were held on both sides of the conflict and perhaps even some executions for treason.

Still, for one brief magical moment on one of the holiest days in the calendar, heaven descended and reigned over a small corner of hell on earth.