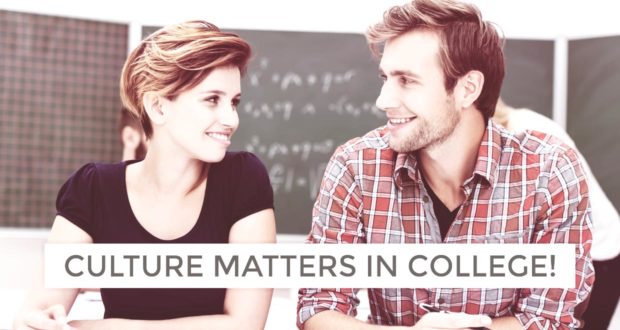 Culture Matters in College! (Especially if You Hope to Find a Spouse)

There is an old joke that young women go to college in pursuit of the MRS degree. Of course, this is not entirely true. Women obviously have an interest in their own intellectual development! Still, there is a certain truth in the saying. Probably a majority of young people meet their future spouses at college, and this would point to an important consideration in one’s choice of school.

Colleges in the United States have long been in decline in respect of both education and atmosphere. Serious students must conduct a careful search for campuses which would afford them worthwhile intellectual training and an atmosphere which fosters responsible student behavior. For the most part, this combination is ever more likely to be found among only Catholic institutions.

So here is the point: young people going to college with a mind to find a suitable life partner as well as to grow intellectually would be well-advised to think about where they are likely to find a good Catholic spouse. Catholics have an obligation to avoid the near occasions of sin, after all, and a college given over to unbridled hedonism should thus be ruled out immediately. There is a positive corollary to the moral principle, as well. Catholics have a further obligation to seek out occasions for virtue!

The whole point of life is to continually improve our spiritual state and this is a great deal easier to do if one is surrounded by like-minded others. A good Catholic college should afford practically unlimited opportunity for spiritual growth. Choosing such a college greatly improves the chances for finding a life-partner who will be just as interested in a mutually growing, Christ-like, and sacramental state of Matrimony.