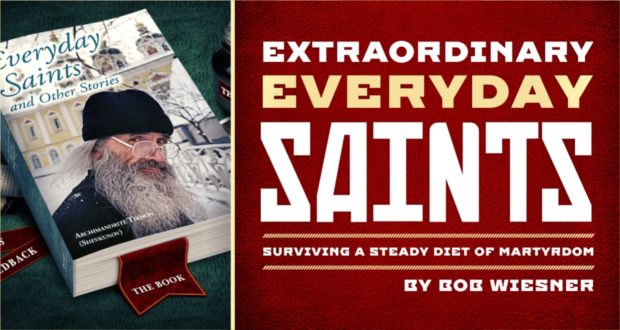 Pope John Paul’s encyclical Orientale Lumen urged Latin Catholics to explore and appreciate the glories of the Eastern sacramental churches. Besides the beauty of the liturgy and the rich spiritual tradition, there may well be added another dimension to the study.

Throughout history, the Eastern churches have been subjected to far more comprehensive persecution than the Church in Europe and the Americas. In the long history of the Church, it has been the case most of the time that secular powers use the force of law in the futile attempt to quench the influence of God in public life.

The Church in the United States has for a long time been used to the comfort of a system protecting the rights of believers. Those halcyon days have now ended and the Church can look forward to an ever-fiercer persecution in our nation.

The pastor of our church in Front Royal gave a sermon shortly after the high courts of the land sanctioned same-sex “marriage.” Father clearly stated that he expected arrest and jail time at some point; sooner or later, someone would request him to bless such an unholy union or would simply take exception to his opposition.

He would refuse to cooperate or retract, of course, resulting in civil proceedings and his subsequent incarceration. Such has already been the fate of clergy in Europe and Canada; the United States has a steadily accelerating tidal wave of laws and regulations which make it all too easy for the godless to expedite the ruin of believers.

Fortunately, there is a handbook of sorts to guide the perplexed through the minefields of a savage secular order. Everyday Saints and Other Stories by Archimandrite Tikhon of the Russian Orthodox Church is a remarkable record of a Church just now emerging from a seventy-year-long ordeal of persecution. This book sold over a million copies in Russia when it was first released, then another million and a half in electronic form; in the publishing world, this is a phenomenal record! The work has now been translated into a number of languages, English included, and is enjoying remarkable sales in many nations.

The Orthodox Church in Russia is presently not in full union with the Catholic Church, but their sacraments are completely valid and they do enjoy the benefits of Apostolic Succession in their priesthood and episcopacy. Thus, they stand in the same position as the Western Church in transmitting Christ’s truth and holiness to their culture. So, of course, when atheistic Bolsheviks began revolutionizing Russia in 1917, one of their very first targets was the Orthodox Church.

Most historians agree that the Soviet system gave the world more holy martyrs in just the 20th century than died in all the previous history of Christianity. Yet, as battered and beleaguered as it was, the Faith survived in Russia! Archimandrite Tikhon writes a vibrant personal record of this Church just emerging from the ashes of a failed secular state and leaves no doubt that there is life, humor (see the story of the Egyptian cat!) and hope even in the midst of a horrendous spiritual devastation.

The monks, nuns, priests and bishops whose lives are written here are unlikely to be canonized (as the author himself makes clear) but the quality of their faith is yet as inspiring as any to be encountered in standard hagiographies.

Archimandrite Tikhon began his ecclesiastical life in one of only two monasteries that remained functional throughout the Soviet era, the Pskov Caves Monastery in Pechory. Until the Second World War, the monastery actually fell within the borders of Estonia; after the war, a series of very tough, very savvy abbots kept the monastery open despite the continuing efforts of the state. The book details various methods the abbots used to “game the system” in order to frustrate the authorities.

Once Abbot Gabriel was ordered by secular authority to close the monastery. He replied that he would, but he needed the local bishop to authorize the closure. The officials brought the bishop’s permission, whereupon the abbot threatened to inform the local Soviet that they had resorted to spiritual authority in a secular matter! The officials disappeared and the matter was dropped.

Abbot Gabriel and Abbot Alipius were both heroic soldiers in the Great War; their bravery on the battlefield translated easily into even greater courage in protecting the Pskov Monastery from Soviet predators. They proved more than a match for the pitiful bureaucrats sent to face them and the monastery continued to nourish a rich spiritual life in the midst of a great darkness.

The monastic institutions of Russia maintain the great traditions of the early Egyptian Desert Fathers. The book speaks of spiritual elders whose lives and words rival the wisdom of their early monastic forerunners. Just as those early monks prophesized, encouraged, rebuked and taught in just a few words, so too do the monks of modern Russia.

Even Father Nathaniel, whose picture adorns the cover of the book and who is described as absolutely the most difficult monk in Pskov, still exhibited astounding spiritual gifts for reading souls!

Father Tikhon describes well the very difficult lives of parish priests in Russia, especially those who ran afoul of the system. Even when sent to serve in the most dismal circumstances, they still maintained their faith and service to those few who came to the church. In the midst of abysmal poverty, these remarkable priests still approached life with zest and joy; they persevered and succeeded in bringing great light to their small little slice of the world.

Of course, there are many monks, priests and nuns who spent long periods in the Gulag. Survival for the faithful in those circumstances often depended upon viewing imprisonment as another form of monastic life! For some, this life may actually have been easier. All they had to do was to maintain their prayer; the ascetic practices took care of themselves!

The stories in this book range from heart-rending to hilarious, but all are inspiring. The everyday people appearing here have much to teach regarding Christian life in difficult circumstances. The primary lesson to be learned is simple: in the face of miserable conditions, the Christian must maintain two vital virtues, humor and humility.

The spiritual health of the Church depends upon a steady diet of martyrdom. Survival of individual Christians in this world is not guaranteed, of course, but Archimandrite Tikhon gives us a blueprint which may well be of great use in the evil days descending upon the Church in America.

The web site for the book includes an appreciation by Archbishop Antonio Mennini, currently Papal Nuncio to Great Britain, but who served for eight years as Nuncio to Russia.

More information is at www.everyday-saints.com.