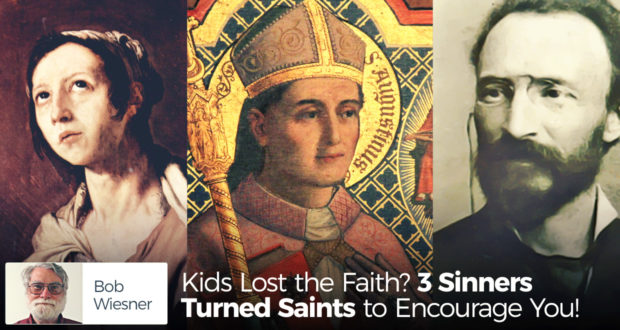 Kids Lost the Faith? 3 Sinners-Turned-Saints to Encourage You!

Counselors here at Seton deal with some amazingly difficult calls, but the calls which cause us the most anguish are those in which parents tell us that their children have ceased practicing their faith.

Despite parents’ best efforts, their earnest prayers, their hard work in teaching and living Catholicism in the family, at times children simply seem to walk away from it.

In a great many cases, those who lose their faith are attending secular colleges; the social and moral temptations encountered in such a hostile environment are too great.

Thus, Seton has always advocated sending graduates only to colleges with a strong Catholic atmosphere; the stakes are just too high to gamble with young souls.

Still, for various reasons, some of our students do find themselves in serious difficulties concerning the faith. There is no magic or easy remedy, unfortunately. Such a situation calls for a great deal of prayer, our continuing love for the straying, an open heart to receive their repentance, and our willingness to encourage their return to faith.

Prayer is the absolute essential in this situation. Fortunately, there are a number of saints whose help would be invaluable in retrieving a lost sheep. St. Monica comes to mind immediately, of course.

When young Augustine went off the rails, she spent many difficult years praying and working for his return. Her son went through many an intellectual problem, toying with various heretical and pagan ideas.

There was a corresponding collapse of morals, almost always an accompaniment to a loss of faith. Yet, St. Monica won through in the end and her son became one of the greatest saints in Church history.

St. Mary of Egypt was raised in a Christian environment, but was evidently a bit flighty. She grew to be quite wild, and was notorious in her native Egypt for her immorality. While sailing to Palestine among wicked company, she decided to see the sights of the Holy Land as a tourist. God and His Mother saw to it that that her visit turned into a pilgrimage.

Some unseen force prevented her from entering a famous shrine, so that she rather impetuously promised to reform her life if she were allowed to pay her visit. Immediately she was allowed to enter.

Under the impulse of strong graces, she then retired to the Palestinian desert and lived a hermit’s life for the next forty years, utterly forgotten by her evil companions and unknown to anyone in Palestine. She was eventually discovered by a fasting monk, who was able to bring her the sacraments shortly before her death. She is greatly revered by Christians throughout the Eastern Mediterranean.

Then there is Bartolo Longo. He was raised in a good Catholic family, but went to a university which had largely abandoned a Christian approach to education.

Young Bartolo quickly descended into a disorderly life involving the usual moral lapses, but also some rather more arcane activities such as dueling and drugs. Finally, he even went about as far wrong as possible: he began to dabble in Satanism!

His family never ceased praying for him and even physically dragged him to various devotions in their efforts to reclaim him. Finally, a preacher wakened his conscience and he made his way back to the life of faith.

He became a famous advocate for the Rosary and spent a great deal of time exhorting young students to have a serious regard for their state of soul.

These three individuals were far gone from faith, but are proof positive that there is always hope for even the most hardened of sinners. For those families suffering a wayward child, we urge you to make these three your special friends and advocates before the throne of God.

They have been there and done that, and certainly know the ropes about finding the way back.