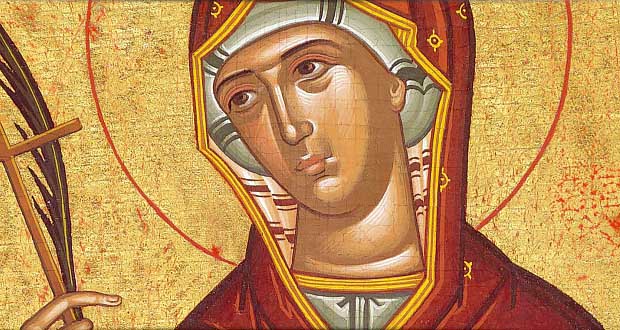 Here’s one for the young ladies! Euphrosyna was a young girl in Alexandria, Egypt, in the 5th century who took some exception to her wealthy family’s plans for an arranged marriage.

Rather than follow her parents’ wishes, she determined that she would run off and live an ascetic life as a consecrated religious. Her problem was that her father (by the name of Paphnutius) had the necessary resources to find and reclaim her if she simply retired to a women’s monastery. So, she came to the conclusion that she must masquerade as a young man and join a men’s community. This she did, under the assumed name of Smaragdus. (No, she was not a minion of Mordor!)

For quite some time, she lived under her assumed name and achieved a high level of sanctity and a reputation as a wise spiritual counselor to all who came to the monk Smaragdus.

In the meantime, Paphnutius spent a great deal of time and fortune in a fruitless search for his daughter. For all his plans for her, he did indeed love her and was heartbroken that she had disappeared so completely. In his desolation, he came to a monastery and asked the abbot for help in dealing with the loss. The abbot referred him to a certain insightful monk named (of course!) Smaragdus!

Over thirty years had passed, and the young girl had changed appearance quite dramatically through age and ascetic practice. She readily enough recognized her father, but Paphnutius had not a clue that he was seeking counsel from his own daughter! For some time, the two held intense and fruitful spiritual discussions, but at some point Smaragdus became ill and clearly was at the point of death in the year 470. Only at her passing did Euphrosyna reveal her true identity. Paphnutius, greatly affected by her holy life and wise counsel, took her place in the monastery and lived there as a monk until his own holy death.

In an age which insists that the individual must “just be yourself!” perhaps there is a certain lesson to be learned in being something other than yourself. This has nothing to do with the whole modern minefield of “gender identity” and other such nonsense, of course. Rather, every Christian must admit tendencies to sin in all sorts of differing aspects. Each of us is morally a great deal less than might be ideal. The whole function of the spiritual life is to grow beyond the tired old human boundaries and transcend all the sinful muck of “just being ourselves.”

We are not saints, generally speaking, but many spiritual counselors recommend that we act like saints anyway. By taking on the guise of saint, the hope is that we will grow into the role and with much practice actually become sanctified. Just as an actor attempts to “become” the character in a play, the ordinary human must aspire to become Saint Euphrosyna, or Saint Paphnutius, or even Saint Robert! The self we must be is the very self that God envisioned before He even fashioned us in the womb, the self as perfected by prayer, penance, sacrament and holy activity.

Perhaps it is best to simply eliminate the limiting word “just.” We cannot be satisfied with merely being ourselves, but we must make it our business to be our REAL selves, the selves God knows, stripped of all the unseemly trappings of sin and imperfection.