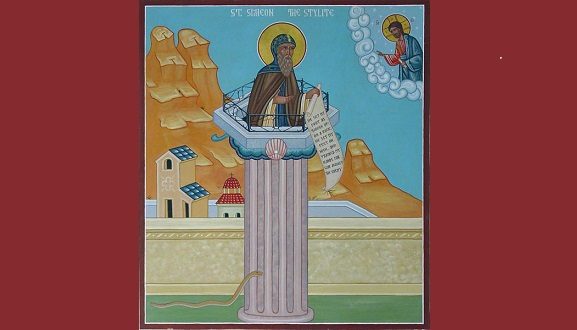 September 1st marks the beginning of the liturgical year for Byzantine Christians. This important day is celebrated as the feast day for Saint Symeon the Stylite, who lived atop a pillar (or stile or stele) for many years. So why does Saint Symeon hold such an important position in the liturgical calendar?

Symeon began his monastic career in the usual fashion, as a novice in the Syrian desert. His behavior alarmed the abbots of at least two monasteries, however, since the penances undertaken by the young man were considered extreme even in an age much given to harsh asceticism. The abbots politely asked him to move on to some other establishment. Eventually Symeon came to a rugged, uninhabited area of desert, claimed it for his own and began to live an isolated life as a hermit.

Soon enough, people began to hear about the extraordinarily holy monk in the desert and flocked to seek his blessing and advice. A number of like-minded men also came and formed a monastery around Symeon’s hermitage. This was not much to Symeon’s liking, of course, so he climbed atop a nearby pillar, about twelve feet high, to escape the crowds. The crowds still came, so Symeon increased the height of his pillar until he finally surveyed the earth from an altitude of sixty-five feet! He lived on his various pillars for thirty-seven years.

Lifted High by Pilgrims and Priests

The wisdom dispensed by this reclusive saint caused an ever-increasing flood of pilgrims, from simple peasants seeking counsel about the most mundane matters, to emissaries from the Emperor himself, asking complex questions about affairs of state affecting the entire world. He carried on a lively correspondence with persons as far away as modern France; some of his letters survive to this day. Since he was so influential for the Byzantine Empire in his day, the Fathers have seen fit to honor his feast at the beginning of the year to invoke his continuing blessing on the affairs of the Byzantine Christian heirs of the Empire.

His example caused a certain amount of imitation, of course. In Constantinople alone, there were quite a number of stylites, revered and admired by the populace in the capital city. Stylitism arose in many Christian centers in the Eastern Mediterranean; the vocation proved profitable for souls, for there are several stylite saints, among them another two Symeons! A theology was developed especially to explain the ascetic value of the pillars, centering upon the intercessory power of a monk thus suspended between heaven and earth.

In addition to the profound wisdom freely given to all, Symeon still maintained an ascetic regimen which would daunt the bravest of souls. Besides being exposed to the elements all year round, he actually seemed to promote certain health problems. For instance, for much of his life he had an ulcerous sore on his leg, inhabited by a number of maggots. One day a maggot fell to the floor of his perch. Symeon tenderly replaced it in the wound, saying, “Here, eat what God has given you!”

An argument might be made that Symeon was not quite right upstairs, given such tales, but his reputation would seem to belie that view. After all, the saints do gain a fair bit of insight into what is proper in the eternal sense. All human beings (with two notable exceptions!) are deranged to some extent due to original sin; sanctity is achieved by overcoming our inherent sickness of mind and soul through prayer and sacrament. The saints, Symeon included, cultivate a close bond with eternity which places material existence into its proper perspective. Still, perhaps some aspects of Symeon’s life need not be imitated too closely…

For some unknown reason, the vocation of stylitism is not widely practiced these days, although there are accounts of stylite monks as late as the sixteenth century in Russia. Mothers tend not to recommend pillars when discussing vocation with their children. Nor, for some reason, do they often speak of those amazing monks, the Grazers, who would find some friendly herd of antelope and hang out with them all day, praying and nibbling on an occasional herb. And as for the Holy Fools…