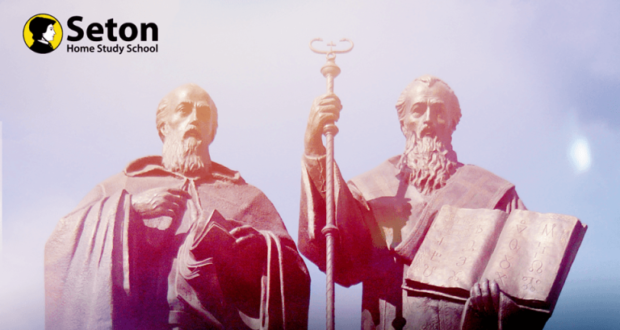 Sts. Cyril and Methodius – Apostles to the Slavs

Bob Wiesner introduces Sts. Cyril and Methodius, two brothers who gave the Slavs a written language to read and share the “Good News” of Jesus Christ.

Apostles to the Slavs

St. John Paul II, among his many other accomplishments, proclaimed two missionaries from the Byzantine Empire to be Co-Patrons of European civilization, along with St. Benedict of Nursia.  The honor was well-deserved, even if their careers were highly controversial in their time.

The two were brothers, Methodius and Constantine, hailing from Thessalonica in what is now northern Greece.  Born in 815 and 826 respectively, they enjoyed a marvelous education and became quite prominent in both civil and ecclesiastical affairs in the Empire.  They were renowned both for their teaching and for various embassies they performed for the Emperor.

A great many tensions were already building between the Latin West and the Greek East at this time, in the 800’s.  In particular, problems were arising in Eastern Europe, in Moravia and Bohemia, what is now the Czech Republic.  Various princes and Latin bishops were attempting to impose the culture of Western Europe upon the Slavic peoples, only then beginning to adopt Christianity.

The mentality of Eastern Europe, however, was rather different, so the attempts to make Latins of the Slavs provoked great tension.  The Slavs appealed to the Byzantine Empire for relief; the mission of Methodius and Constantine to Eastern Europe was the result.

Part of the problem the Slavs had in maintaining their own culture was linguistic.  Although they had their own language, they had never developed full literacy.  They had no way to communicate in writing, a circumstance Western princes attempted to exploit by forcing them to use the Latin alphabet.

This was not a success, since some elements of Slavic language could not easily be expressed in that form.  This was a problem Constantine and Methodius immediately solved.

They devised an alphabet basically using Greek letters, with some few added and stylized to reflect unique sounds in the Slavic tongues.  Their initial effort was called the Glagolitic script.  In an attempt to maintain peace with the Westerners, they devised a Slavic Liturgy using the new alphabet, but the effort was rejected in favor of the usual Latin liturgy.  The dispute grew more heated, eventually resulting in the brothers travelling to Rome to put the case before Pope Adrian.

The Pope sided with them; Methodius returned to Bohemia as Archbishop having jurisdiction over what is now the Czech Republic, Hungary and Serbia.  Conflicts with the Latin bishops and princes continued, but ultimately Methodius was successful in claiming his authority.  His new alphabet, revised by scholars in Bulgaria, became known as the Cyrillic alphabet; adoption of the new script saw literacy among the new Eastern Christians spread rapidly and Eastern European culture was spared from Latin domination.

Constantine remained in Rome.  He took monastic vows, took the name Cyril and died shortly after.

The Slavic (Glagolitic) Liturgy of St. Methodius did not remain in use.  In 1088, St. Vladimir of the Kievan Rus adopted the Byzantine Liturgy as the rite for his newly converted people.

The Liturgy was translated into Slavonic and was adopted by most of the Slavic Christians, thus providing the final victory for the missionary efforts of Sts. Cyril and Methodius.