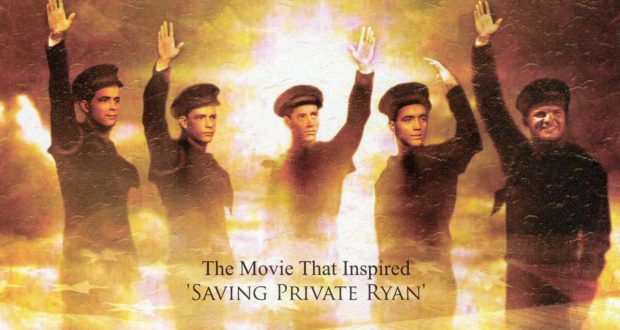 Bob Weisner shares how 5 Irish Catholic brothers joined the navy, and during the Pearl Harbor attacks, gave their life for their country, and their Faith.

In honor of Memorial Day and the men and women who have served our country, we offer this article by Bob Weisner that first appeared on published July 5, 2012.

One of the most tragic and yet inspiring stories from World War II concerns the Sullivan family of Waterloo, Iowa.

Five brothers from this Irish Catholic clan enlisted in the Navy; George, Francis, Joseph, Madison and Albert all joined shortly after the Pearl Harbor attack.

Although it was the custom to separate siblings in the service, the Sullivans petitioned the Navy for permission to serve together; they were all assigned to the USS Juneau, a cruiser fighting in the Pacific theater.

On November 12, 1942, during the Guadalcanal campaign, the USS Juneau was badly damaged by a Japanese torpedo. The next morning, as the ship was limping toward the naval base for repair, another torpedo struck near the ammunition supply.

The ship blew apart in a tremendous explosion, killing most of the crew immediately. Some eighty men were able to escape the carnage on life rafts, including only one of the Sullivan brothers. Due to erroneous reports that there were no survivors, rescue efforts began late; by the time the survivors were located, only ten men were still alive.

George Sullivan was not among them; the survivors believed that he had been killed by a shark while cooling himself in the sea.

The Sullivan brothers became national heroes once their story became known. President Roosevelt sent a personal letter of condolence to their parents, Tom and Aleta Sullivan, once the news became known.

The parents and sister Genevieve began speaking to groups in factories and shipyards to boost the war effort. Genevieve Sullivan herself followed her brothers into the service in June of 1943. Two Navy ships were named in honor of the brothers.

Pope Pius XII sent the family a silver medal and a rosary along with his blessing for the family’s sacrifice.

The Sullivan family provides a sterling example of the Catholic approach to patriotism.

The brothers had all been taught that love of country is an important virtue; Catholics owe allegiance to their nation and must be willing to serve their fellow citizens as an act of charity.

Informed by their faith, the Sullivans were willing to lay down their lives for their friends and fellow Americans.