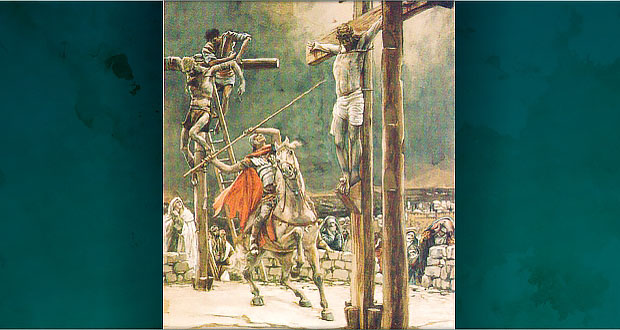 The Unlikely Convert and Martyr: Longinus

Among the very closest witnesses to the crucifixion of Jesus was a rather bored centurion employed in the not-so-very-glorious duty of executing criminals.

Scripture tells us very little about Longinus, other than he ran his lance into the side of Jesus to make certain of His death. He then made his confession of faith and disappeared from the Scriptural record. We must turn to tradition to fill out the story of this extraordinary martyr.

What exactly happened when the lance pierced the heart of Jesus? Blood and water gushed forth, therefore providing the vital link between baptism and the crucifixion. Some of that precious liquid no doubt splashed upon Longinus. That in itself was not particularly noteworthy for this experienced soldier; he had often been bathed in the blood of foes in battle. But there was something different about this experience.

Longinus looked around and saw some rather unsettling sights: a tremendous storm arose, the earth trembled, the dead rose from their graves. The point is that Longinus SAW these things. You see, Longinus was all but blind, being afflicted with severe opthalmia. Perhaps he had been relegated to execution duties (a dirty job under all circumstances!) because of his poor eyesight.

But as soon as the blood of Jesus touched him, he was fully cured of his diseases, both physical and spiritual. His physical sight returned, but in the same instant, Longinus, for the first time in his life, experienced an amazing moral and intellectual awakening. Thus he was able to pronounce those immortal words, “Truly this was the Son of God!”

Given his sudden conversion, it is not difficult to imagine a few of his subsequent actions. He may have turned in some bewilderment to Mary and John, standing close by, and asked, “What happens now?” It is all but impossible that he did not help in taking the body of Christ from the cross and accompany the burial party to the new grave of Joseph. Tradition again tells us that the same detail of soldiers under the command of Longinus also was set to guard the tomb. Thus Longinus may have been the very first to witness the Resurrection of Christ!

Bribes were offered to the soldiers to accuse the Apostles of stealing Jesus from the tomb. Longinus, along with two of his men, refused the bribes, of course. Shortly thereafter, Longinus and his two companions left military service, were baptized, and traveled to their homeland of Cappadocia (in modern Turkey) to spread the Gospel.

Meanwhile, high-ranking Jewish religious authorities in Jerusalem were still desperately trying to stifle the growth of the fledgling Church. They were aware of the three soldiers who had resisted their bribery and considered them a dangerous loose end. They convinced Pilate that Longinus constituted a revolutionary threat to Roman rule in Palestine; Pilate then sent a unit of soldiers to Cappadocia to find Longinus and execute him for the crime of treason.

Pilate’s men arrived in Cappadocia and lodged with a local retired soldier. They enjoyed the hospitality of the house and no doubt traded a few entertaining war stories. Finally their host asked them their mission in Cappadocia. Only then did their host reveal that he was the very man they sought!

After their gracious reception, the soldiers were understandably reluctant to carry out their orders. Longinus was forced to argue with them for some time before he convinced them that their duty as loyal soldiers compelled them to carry out Pilate’s wishes. As proof that they had indeed executed Longinus, they brought back the head of the martyr for Pilate. The governor immediately ordered that the head of Longinus be thrown into the city dump, as a fitting resting place for a traitor.

But the story does not quite end there.