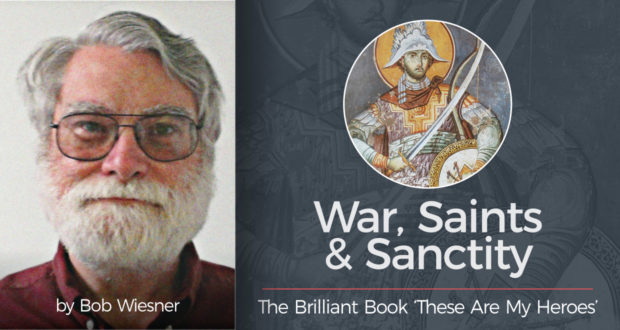 War, Saints & Sanctity: The Brilliant Book ‘These Are My Heroes’

Everyone has heard of Marine Biologists (look up the career of Eugene Sledge after his time in the Corps!) but few have had the idea that Marines might be effective Catholic apologists.

Yet, one Robert Leckie did indeed write at least two outstanding works of Catholic thought after his honorable service fighting the Japanese in World War Two.

Leckie served at Guadalcanal and on New Britain, two of the most miserable campaigns of the war. Then came Peleliu, the campaign which moved even that Marine’s Marine, Elmo “Pop” Haney, to retire from combat at close to fifty years of age; Haney, who had seen a bit of everything during his long career, was heard to say quietly of Peleliu, “That was terrible!”

He returned to a journalism career after his discharge, married and raised a family in his home state of New Jersey. More importantly, he began to deepen his practice of Catholicism and studied diligently to learn all he could of his Faith.

He wrote a series of popular history books, largely about the Marines, though his interests ranged the time-line of all American wars. But he also turned his literary talents to telling the story of Catholicism in America with American and Catholic, a survey of the course of Faith from the very beginnings of European colonization through the history of our Republic; he discusses realistically the often uneasy relationship of Catholics to that political entity.

But an even more fascinating work is Leckie’s extraordinary analytical work on the saints, These Are My Heroes.

“In all of history there exists no more glorious company of human beings than the saints of God, and yet no group has ever been more misunderstood or misrepresented. The saints have been looked at from every angle and found to be what they are not…”

So begins Leckie’s task of presenting the saints as they really are, in all their human weariness, irascibility and smelliness. The saints, after all, are human, and it is through their very humanity that God chose to work His moral miracles and even a few inexplicable physical feats. Perhaps it is due to Leckie’s own experience of war that he comes to a fresh understanding of sanctity.

After all, he saw first-hand that victory in the Pacific came at the hands of filthy, stinking, ragged, half-starved, half-crazed Marines. So, too, victory in the moral order cannot come from the sanitized saints of modern hagiographers. Leckie describes such maudlin pious efforts as “the pretty-pretty school of sugary hagiography,” and sees no use in it for the ordinary Catholic trying to relate sanctity to their own situations.

No, Leckie’s saints more often than not have dirty hands. They are kissing lepers and perhaps bathing the most hideous wounds, just as the Marines on Guadalcanal tried desperately to bind the devastating injuries of a shell-burst.

They are found vigorously upbraiding outrageous public sinners who have no intention to repent, just as foul-mouthed Marines often cursed their enemies, or the torrential rain, or their jungle rot.

The saints made light of imprisonment or impending death, just as Marines muddled through misery with grim gallows humor. Often enough, the saints not only had dirty hands, but were entirely unwashed, since overly zealous cleanliness really does not have much to do with Godliness.

True, in our age charity does demand a certain standard of bodily hygiene, but this is not the essence of the thing. Charity also demands that we deal with those outrageous sinners, the morally bankrupt, the aimless, smelly addicts, the entirely clueless; this is where redemption is needed, and this is precisely where a sugary, sanitized “saint” will simply not do at all.

The lessons Leckie draws from the saints are extraordinary, to say the least. At first glance, it may be thought that such odd saints as Symeon the Stylite or Benedict Joseph Labré would have little to say about the modern condition.

Both were highly unwashed, to begin with, but led life-styles that few would choose these days. Yet, there are elements in these two which will lead the honest reader to take another look at how Catholics should comport themselves.

Thomas More associated with the high and mighty, yet Leckie draws lessons from him very much applicable to the common man.

So it goes throughout the entire book; such diverse saints as Bernadette, Thérèse and Teresa of Avila make their appearance. The book visits such luminaries as Augustine, Francis, Ignatius and Wulfric (no, read the book; no spoilers here!) and tells us exactly why we should pay heed to them. Many more join Leckie’s parade, all relevant, all fascinating and, best of all, very real.

In the course of telling these tales, the book also serves as a prophetic indictment of our age. Consider these words, speaking of tendencies in our own nation and our own government:

“What, then, will happen if a government decides to limit the size of your family? What happens if the government, as in Prohibition, decrees that smoking is an offense against the public health? Supposing the state puts an end to private property, or disperses the family, or takes over all the education of the young? What if abortion is made legal, and the child in the womb who has rights even as you and I, is put to death with state approbation? Will the state tell you to sterilize your retarded children? Is the day very far away when mothers will have to report on the health of their young to the town nurse, or to that social worker “agent-in-residence” who may replace the father?”

“These things have not happened yet…” Leckie goes on to say. Well, no, not in 1964 at the publishing of this book, “…but they can, and when they do, you and the state are adversaries.”

Leckie’s prescience is downright eerie; in 1964, by comparison with today, the fabric of American life was just barely beginning to unravel. Most thought that those very few fluttering ragged ends at the fringes of society would soon mend themselves and had little to do with our lives.

Robert Leckie knew better. We were in deep trouble even then, and his prophetic words quoted here should indicate that he does indeed have something to say to our own unraveled age.

Both books are long since out of print, but are available used through Amazon. Robert Leckie is an American Catholic apologist well worth knowing.