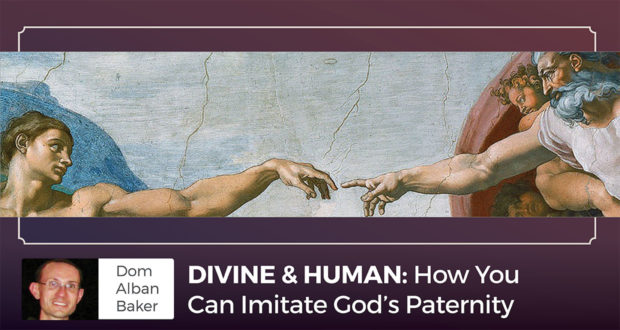 Divine & Human: How You Can Imitate God’s Paternity

Fathers can excel in their paternity, their providential role. How? Dom Alban Baker shares the key to imitating God in His love, forgiveness and mercy.

Freud believed that belief in God was a displaced desire for a loving human father.

In his The Future of an Illusion, the Catholic professor of psychology Paul Vitz wrote, “the terrifying impression of helplessness in childhood aroused the need for protection—for protection through love—which was provided by the father…Thus the benevolent rule of divine Providence allays our fear of the dangers of life.”

Freud’s claim, as Vitz relates, was that “the oldest and most urgent wishes of mankind are for the loving protection and guidance of a powerful father.”

We know from St. Paul that “all paternity in heaven and on earth is named” with reference to God the Father (Eph 3.15). Therefore, Freud had something right—that is, he connected paternity on earth to God. However, he reversed the order. All human fatherhood derives from God the Father, not the other way around.

Our deepest desires are for God as Father, but in His great wisdom, He has willed that creatures participate in His goodness, and one of those participations is paternity: every human father participates in the fatherhood of the first person of the Holy Trinity.

Thus it is important that earthly fathers imitate their heavenly Father in the way in which they care for their children.

In considering this calling, it is fitting to meditate on passages from the Gospels which indicate the qualities of the Father. First, we find that He loves His Son and makes that clear to the Son and to others. In both the Baptism and the Transfiguration, the Father speaks, the only two times in Jesus’ earthly life in which He does so (it would seem the taciturnity of a human father has a precedent).

He says very little, but what He does say is of immense significance: “This is my beloved Son, with whom I am well pleased.”

A Vocation to Encourage

God the Father says this to encourage faith in His Son (for Christ has no need to be reminded of His Father’s love), while the human father says it to encourage his children.

Children who doubt their father’s love are sure to be uncertain of themselves, which translates to an inability to cope. In contrast, the Cross was possible to Christ because of His knowledge that He was loved.

What this means practically is that love must be expressed in words and gestures with frequency; a man must not allow his tendency toward silence to keep him from assuring his children that he is well pleased with them.

The second instance is from Luke’s Gospel, this time not the Father acting, but Jesus’ parable about what the Father is like. Somewhat misleading in name, the parable of “The Prodigal Son,” is less about the son than the father. The father sadly lets his son separate from him, knowing that it will do more harm than good, but trusting him to divine Providence.

Thus human fathers must be ever devoted to the wisdom of God, believing with a lively faith that the evils that befall their children are unto their eternal good, and praying fervently that this be the case.

Even with devout, homeschooling families, the threat of falling away from the faith is very real. It is the father’s role to trust that, as Paul writes,

“We know that in everything God works for good with those who love him, who are called according to his purpose.” But the father in the parable not only trusts—he also watches: “And he arose and came to his father. But while he was yet at a distance, his father saw him and had compassion, and ran and embraced him and kissed him.”

This applies to every sin—it is the father’s role to punish bad behavior, and it is also his role to reconcile to God, so to speak, when sorrow is expressed and resolve to change is present. He is called to be just in his punishments but quick to forgive, quick to rejoice in the goodness of his child.

The final example is related in all the Synoptics: the Father’s silence at the death of Christ. “Eli, Eli, lama sabachthani? My God, my God, why hast thou forsaken me?” The Son’s cry is to His Father. Augustine says that in saying this Christ cries out both for Himself as our Head and for us as His members, knowing that we so often experience abandonment by our fathers, either really or emotionally.

As a Dominican professor once put it, “My parents messed me up. Join the club!” In a fallen world, parents fail. Given the burden that they bear as head of the family, fathers seem to fail most of all, or so they often feel. It is good to have perspective—this is the norm after the Fall.

Fathers should not lose heart when they are not sure what to do next, or how best to respond to their children’s needs. Above all what is needed is prayer to be a good, perceptive, loving father, and then to discern God’s will as best we can.

There will be times when children think they are abandoned by their father, neglected, unappreciated. But with daily prayer for each child and attentive care, God the Father will make up for the sins and failures of those who participate in His paternity on earth.

Freud’s vision of religion (and human fatherhood) was fatalistic and flawed. But he did hit upon something very true: divine paternity and human paternity are intimately related.

It is by imitating God the Father in His love and forgiveness and by trusting that same Father to have mercy that fathers excel in their providential role.