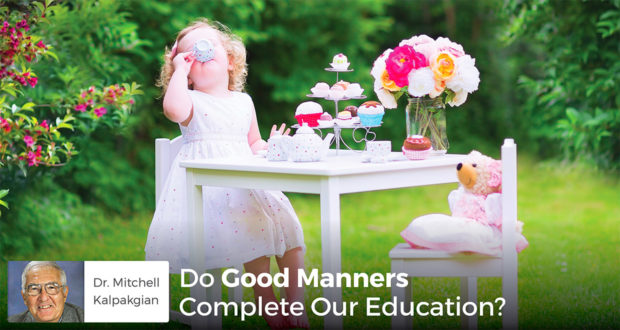 Do Good Manners Complete Our Education?

Is our education complete if we never learn the art of conversation nor express common courtesy to others? Mitchell Kalpakgian and Robert Frost think not.

It is often assumed that the educated have learned propriety, courtesy, and the importance of manners as a natural expression of good breeding and the nature of a gentleman or a lady.

However, the simple and the unlearned sometimes practice civility with greater mastery and knowledge than the cultivated.

The sophisticated sometimes preen themselves on their accomplishments and knowledge, and can fall into the behavior of snobbery or arrogance.

On the other hand, the common man who earns an honest living by hard work may have much to teach the high brow intellectual by his good heart, kind manners, and respect for all people—an important lesson taught in Robert Frost’s poem “A Hundred Collars.”

Dr. Magoon, a college professor with a distinguished reputation, occasionally returns to the small town of Lancaster where he was born and educated, although his famous career prevents frequent visits. At best he “sends the children down there with their mother/ To run wild in the summer—a little wild” while he joins them for a few days during the week. Dr. Magoon, proper to the point of rigid and stiff, needs to distance himself from anything that compromises his respectability.

On one of these infrequent visits he misses his train and must wait until the next morning to complete his travel. At eleven o’clock at night he looks for a room in the small town of Woodville Junction with only one hotel, only to hear the disappointing words “No room.”

However, the night clerk offers a suggestion: “Unless you wouldn’t mind/ Sharing a room with someone else.” Dr. Magoon is not sure. This might be too wild for a gentleman.

Pondering his decision, Dr. Magoon notices another late traveler asleep in a chair who refused a similar offer because, the clerk jokingly remarks, “he was afraid of being robbed or murdered.” Insisting “I’ll have to have a bed,” Dr. Magoon accepts the conditions of sharing a room with separate beds with a stranger.

Introduced to Lafe by the clerk who recommends him as a trustworthy person (“I know him: he’s all right. A man’s a man”), Dr. Magoon gazes at the stranger whom he compares to a brute: “Naked above the waist, / He sat there creased and shining in the light.”

Even though Lafe initiates conversation by posing a friendly question for the learned man (“Hold on, there’s something I don’t think of now/ That I had on my mind to ask the first/Man that knew anything I happened in with”), Dr. Magoon only looks away and does not respond.

The refined, cultivated Dr. Magoon feels intimidated, acts as if he regrets his decision, and acts uncomfortable in his surroundings. He behaves as if he has lowered his standards and as if a sophisticated scholar has nothing in common with a crude common man.

The affable Lafe, however, is neither coarse nor common. Like a gentleman, he begins friendly conversation and tries to put the tense Dr. Magoon at ease. Mentioning that he has outgrown his size fourteen shirts, he offers his one hundred collars to the nervous professor: “Too bad to waste them all. You ought to have them.” This second overture of good will also suffers rejection as the professor refuses the offer as if he would be tainted if he wore another man’s shirt.

When the silent Dr. Magoon stands in the room without moving, Lafe again attempts to make the tense man feel relaxed: “Sit down or lie down, friend; you make me nervous.” Nothing Lafe says or does receives any appreciative response or sense of gratitude from the educated gentleman.  When the professor finally lies on the bed with shoes on, Lafe tries again to offer another sign of courtesy and volunteers to help the professor take off his shoes, only to receive the cold response: “Don’t touch me, please—I say, don’t touch me, please.”

The common man acts like a gentleman, and the cultivated scholar behaves like a boor. Tactlessness refuses graciousness.

Sensing Dr. Magoon’s fear and discomfort in sharing a room with a stranger, Lafe again tries to dispel all the professor’s reservations and doubts by placing all his money, all the $90 he has received as a bill collector, in plain sight to dispel any idea of theft or untrustworthiness.

Good-naturedly, Lafe comments, “You’d better tuck your money under you/ And sleep on it the way I do/ When I’m with people I don’t trust at night.” In every possible way Lafe makes all these attempts to create some sense of amiable exchange.

He mentions to Dr. Magoon his livelihood as a newspaper employee, his travels as a salesman and bill collector through all the farmsteads, his cordial relationships with all the subscribers to the paper, and the hospitable welcome he always receives on his visits.

Lafe admits, “It’s business, but I can’t say it’s not fun.” On the other hand, Dr. Magoon offers no similar personal information about work, family, or background.” All the courtesy, friendship, and cordiality remain one-sided.

Sensing that Dr. Magoon will never enjoy a good night’s rest in a room with a common man whom he regards as coarse and low, Lafe kindly leaves the room so the professor will relax enough to dispel his fear and fall asleep: “And now I’m leaving you a little. / You’ll rest easier when I’m gone, perhaps____” After Lafe makes one final offer of sending Dr. Magoon the size 14 shirts he has outgrown which he again refuses, Lafe lets the professor have the room entirely to himself and invents some excuse for leaving: “I’ll put the light out. Don’t you wait for me:/ I’ve just begun the night . . . . There now, you get some sleep.” The host leaves to give the room to his guest—the ultimate act of thoughtfulness and graciousness.

As Frost’s poem shows, the educated are not always the most refined, sensitive, or appreciative of guests. Their sophistication can make them snobbish. They may fail to recognize good manners in their most simple form.

An offer of friendship, hospitality, and good will goes unacknowledged.

As the poem shows, a common man, though “a little wild,” may display better manners than a cultivated gentleman. Lafe knows how to enjoy and befriend others in an informal, genuine, and natural way that the stiff Dr. Magoon, who complains “But really I—I have so many collars,” has never learned.

Is an education complete if a person never learns the art of conversation and the pleasure of enjoying people and never appreciates the hospitality and thoughtfulness of gracious people who know the art of pleasing others?

Of what benefit is an education that only bestows “collars,” mere formality, awkward stiffness, cold demeanor, and no sense of playfulness and lightheartedness?