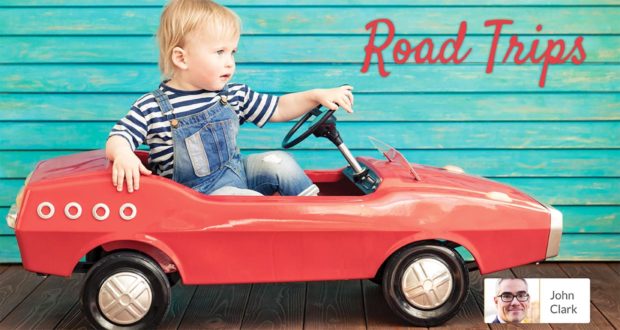 Do Road Trips Make the Best, Most Lasting Families Memories?

Road trips are a great American experience and unique opportunities to create lasting memories. So make some plans, gather the family, and get on the road.

Every time I drive down the road and see a family watching a show on the overhead screen on their car, I feel a little sad.

They’re missing out on the chance for some great family times.

When I was growing up, my family’s vacations normally took the form of fishing excursions to Canada.

I’m not sure how or why my Dad picked the precise location of Webbwood, Ontario, but that’s where we went every year. And if you look at a map and draw the route from Front Royal, Virginia, to that little town, you will see that it’s a long way—about sixteen hours of driving. If my Dad disliked driving that distance, he never let on.

And mostly, my brothers and I enjoyed the drive.

The vacation began as soon as we pulled out of the driveway. We’d listen to old time radio shows and talk shows on the radio.

But mostly, we just talked to each other and snacked on cookies our grandmother had given us for the trip. (We also argued with each other—after all, we are talking about a family with seven boys, each of whom prided himself on the clever use of invective.)

We would take turns sitting in the front seat listening to the CBS Radio Mystery Theater with my dad or chatting about his adventures with his fellow Green Berets, his recent sales meetings, or the ways that Canada was different from the United States.

In addition to our conversations, we had our share of adventures on those drives.

Though we didn’t stop for hotels, as my Dad drove straight through the night, we did stop in the morning for breakfast. When I was growing up, these were the only times I remember ever eating out. Somehow, when you’re a little kid, it’s exciting to order food and have someone bring it to your table.

Over the course of those years, our car broke down a few times along the way, and one such occasion has lived on in Clark folklore ever since.

It all started when, on the last morning in Canada before we left for home, one of my brothers decided that it would be a good idea to put chocolate chips in the scrambled eggs.

For obvious reasons, I opted out, but my youngest brother Timothy decided to partake in the questionable concoction.

About thirty minutes later, with my Dad driving, Timothy in the front middle seat, and Ken in the passenger seat with his head on his pillow, Tim’s stomach decided that it could no longer hold the contents, and Tim threw up all over Ken’s pillow.

My father, trained to camouflage himself in any environment on earth and infiltrate enemy territory but never for anything like this, swerved off the road and went into a ditch.

A few minutes later, a Canadian policeman came along and radioed for help. Within minutes, a tow truck arrived and out popped a little guy who looked like he had been bathing in discarded motor oil all morning. To his credit, he hooked the car up to his truck and pulled it out in less than two minutes. He walked over to my Dad and said, “Forty bucks.” My dad said, “Huh? Forty dollars?”

“Yep,” came the response. Though a $1,200 hourly rate seemed a little pricey, there wasn’t really anything my Dad could do but hand him the money he was planning on using to buy us lunch.

(Though, truth be told, none of us felt too much like eating at that moment.) Of course, my Dad forgot about the Canadian/U. S. exchange rate and handed the man forty U. S. dollars, which is the equivalent of about $110 dollars today.

We all climbed back in the car and my Dad stopped at the nearest gas station to clean up the car. Happily, though the car was still pretty clean, Ken’s pillow wasn’t as lucky. And I learned something that day: sometimes, growing up can involve cleaning up someone else’s mess.

Road trips are a great American experience: some good, some bad—each one a memory. Each one a chance to bond a little more with your family.

So take it from a father who is watching his adult children grow old enough to move out of the house: close the screen, put away the electronics, and spend time with each other the next time you take a long road trip on your vacation.