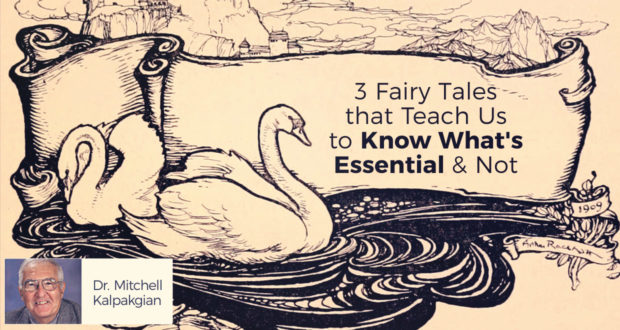 Good judgment is the ability to distinguish between primary things and secondary things, a person’s most pressing duties and obligations and his other responsibilities.

For example, being a good parent and devoted spouse has greater priority than making more money or pursuing a career at the expense of family.

A mark of wisdom is the intelligence to separate the essential and the non-essential, especially in the matter of making purchases.

7 Examples of Wisdom and Foolishness

For example, to buy unaffordable luxuries and go into debt that exceeds a person’s earnings or savings only leads to foolish spending.

Many folk tales and fairy tales offer proverbial wisdom about these important choices between primary and secondary things and between essential and nonessential matters.

1. The Gifts of a Prince or Peddler

In Hans Andersen’s “The Swineherd,” the Princess can choose between the exquisite gifts of a prince and the cheap merchandise of a peddler.

As a symbol of his love The Prince offers a rare rose that blooms only once in five years, “a rose which smelled so sweetly that its scent would make one forget all one’s sorrows and troubles,” and a nightingale “which could sing as if all the beautiful melodies in the world were to be found in its little throat.”

The Princess rejects the priceless gifts of her suitor and spurns the love of the prince. When the Prince returns in disguise as a peddler selling a magical frying pan that releases the smells of all the kitchens in the town and a rattle that plays all the popular songs of the day, the Princess purchases the novelties by paying the price of ten kisses for the pan and a hundred kisses for the rattle. She purchases junk with her greatest treasure, her kisses.

In rejecting the precious gifts of the rose and nightingale, symbols of the pure love of the prince, and buying the pan and the rattle sold by a common peddler, the Princess chooses the cheap over the excellent, the common smell of kitchens over the exquisite perfume of the rose, the popular tunes of the day over the heavenly music of the nightingale.

She exchanges the sublime for the ridiculous. She lowers the dignity and honor of a princess with kisses to a stranger for trivial novelties amounting to momentary pleasures but rejects the prized gifts of a loving prince bestowing eternal sources of joy.

The foolish Princess valued the tawdry over the beautiful, the temporary over the everlasting, and the odd and man-made over the natural and heaven-sent. The Princess’ every choice prizes the secondary thing over the primary and the non-essential to the essential.

2. A Favor from a Flounder

In “The Fisherman’s Wife” from the Grimm folktales a wife begged a favor from a flounder that her husband saved. When caught by the fisherman, the fish pleaded, “Fisherman, let me go, I am not a real fish but an enchanted prince.” The fisherman granted the request and forgot about his good deed until his wife protested: “Then, did you not wish for nothing?”

As repayment for the fisherman’s kind deed, she insists that her husband ask for a cottage to rescue her from her dingy hovel. After the flounder honors her wish, she continues to make greater demands and more grandiose requests like a house and then a castle.

Next she desires to be a king, then an emperor, and finally the pope. Her final ambition is to be rule the sun and moon. Although the flounder accommodates all her wishes, it not only refuses this last demand but also revokes all his earlier gifts: “Go home with you!” he angrily responds to the fisherman’s last plea. “You will find her in the hovel!”

The wife rejected the essential and kept demanding extra, more, greater, and bigger—all the unnecessary things—until she lost everything because of her avarice.

3. A Goblin at the Grocery Store

In Andersen’s “The Goblin at the Provision-Dealer’s,” a goblin that haunts the grocery store waits with anticipation all year for a dish of porridge the grocer offers him. The goblin cannot imagine leaving the shop as long as he receives the porridge at Christmas.

One day the goblin observes a poor student purchasing cheese and candles from the grocer who wraps the cheese in a paper torn from an old book of poetry.

As the student reads the verses and marvels at the beauty of the writing, he changes his mind about the purchase of the cheese and spends his money buying the old book of poetry instead of food for dinner: “You can let me have it instead of the cheese. I can make do with bread and butter.”

The goblin watches the transaction in utter disbelief that anyone would foolishly sacrifice cheese to buy a useless old book of poetry.

To buy a book and to go without a hearty supper makes no sense to the goblin who values the food for the stomach more the nourishment of the mind. Curious, the goblin peeps through the keyhole of the student’s room where the book of poems lies open:

“A bright beam of light rose out of the book and grew into a trunk, a mighty tree that rose up high and spread out its broad branches over the student.”

However, unlike the student who will sacrifice the cheese for the poetry—the lower good for the higher good—the goblin decides to be moderate and “level-headed” assuming he can enjoy the best of both worlds: “I’ll divide my time between them . . . . I can’t give up the provision dealer entirely, on account of the porridge!”

By “level-headed” the goblin means he will share equal time with the student on the second floor and the merchant on the first floor. He will take the best of both worlds and believe he can have his cake and eat it too, imagining that he can compromise and evenly balance the lower pleasure of porridge with the spiritual joy of great poetry.

He cannot sacrifice the lesser for the greater and considers himself practical and sensible because he can alternate porridge and poetry—as if they were equal in value.

Concluding the story with the observation, “We, too, go to the provision-dealer’s—for porridge!” Andersen illuminates this subtle form of temptation that exalts temporary pleasure over the eternal joy, the satisfaction of the body over the health of the soul, and the smallness of a petty good over the glory of a heavenly vision.

So often those who fail to distinguish the essential and the non-essential and the primary and secondary lower themselves and behave like a goblin who, like Esau, prefers a mess of pottage to his birthright.