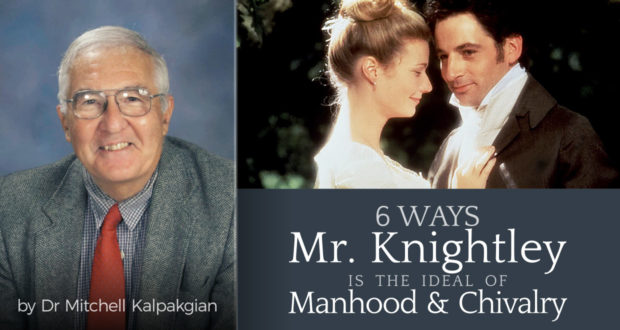 6 Ways Mr. Knightley is the Ideal of Manhood and Chivalry

As his name implies, Mr. Knightley epitomizes the gentleman, a man whose manners, conduct, and treatment of all human beings reflects honor, courtesy, chivalry, and thoughtfulness.

He embodies manly honesty, a strong sense of duty, and a genuine desire to please and serve others. He honors his promises, puts others first with the utmost consideration, and places his own wishes last in all his relationships with others.

As a gentleman Knightley always detects breaches of manners in human behavior that lacks tact, discretion, and delicacy. For example, he reprimands Emma for meddling as a matchmaker in the life of the simple and sweet Harriet Smith, a young woman courted by Robert Martin, an honorable farmer of whom Emma disapproves.

Emma fills Harriet’s mind with delusions of marrying into higher social status (“good society”) and promotes an imaginary romance with Mr. Elton, a sophisticated Anglican clergyman. In knightly fashion Mr. Knightley always speaks the truth in a frank, direct manner without mincing words. He cautions Emma, “You are more likely to have done harm to yourself, than good to them, by interference.”

He warns her not to be officious, insisting that adult men and women need no matchmakers to govern their lives. Neither bachelors nor marriageable women need Emma’s special assistance: “Depend upon it, a man of six or seven-and-twenty can take care of himself.”

A gentleman speaks common sense, minds his own business, does not exaggerate his importance, and refuses to compromise the truth.

Throughout the novel Knightley never flatters Emma as many do, complimenting her for qualities she imagines herself to own as many praise her beauty, elegance, and savoir-faire.

Knightley corrects folly rather than encourages it as when Emma forms strong resolutions to improve her mind by reading but never exerts the will power to achieve her goals: “I have seen a great many lists of her drawing up at various times that she meant to read regularly through”—all lists of books that remain unread.

She enjoys painting portraits, but they exaggerate features of the face or add touches of beauty lacking in the original. While Mr. Elton, to place himself in Emma’s favor, insists that Emma’s portrait of Harriet is a “most perfect resemblance” and comments “I do not know anyone who draws so well as you do,” Knightley gently offers constructive criticism: “You have her too tall, Emma.”

A gentleman does not stoop to white lies.

Emma imagines herself as a young lady of impeccable social graces and is accustomed always to receiving compliments from the elderly ladies in her circle of acquaintance, but Knightley reminds her of her insensitive remarks to the elderly, garrulous Miss Bates whose conversation “without pause” about small things jumps from topic to topic in random confusion.

On one occasion when many are socializing, the witty Frank Churchill attempts to be the life of the party with his request that every member of the group say one clever thing, two moderately clever things, or three dull things. Playfully, Miss Bates says, “I shall be sure to say three dull things as soon as ever I open mouth, shan’t I?”

To prove her cleverness and outshine Frank, Emma attempts to be even more amusing with the quip: “Ah! ma’am, but there may be a difficulty. Pardon me—but you will be limited as to number—only three at once.”

Ungracious, Emma hurts the feelings of the kind, good-natured woman as Miss Bates blushes and feels the slight. Again Mr. Knightley reproaches her for a lack of delicacy and kindness: “How could you so unfeeling to Miss Bates? How could you be so insolent in your wit to a woman of her character, age, and station?”

A knightly man never gives offense and corrects the unmeasured words and thoughtless acts of those who lack tact.

Mr. Knightley, however, never seeks the center of attention by posing as the wit, the life of the party, or the great entertainer. Always social and gracious, he never resorts to displays to gain acclaim or compliments but unassumingly converses with all people on a multitude of topics from the trivial to the important with perfect ease and no airs of superiority.

He makes regular visits to Emma’s father, Mr. Woodhouse, whose conversation is always confined to the weather and to health. At social functions when the Mrs. and Miss Bates need transportation to the event, Mr. Knightley always volunteers so that they do not feel beholden.

A gentleman does kind deeds quietly and unnoticeably, always aware of the needs of others without their asking, kind favors done without any ostentation.

Mr. Knightley always objects to men who do not live up to the ideals of honor and integrity. Frank Churchill, whose widowed father has recently remarried, constantly makes promises to pay a visit to congratulate his father, honor his step-mother, and perform all the filial duties of a good son.

However, as the date of the visit approaches, he continually invents feeble excuses that disappoint all who expect him, especially his step-mother who begins to feel too unimportant for a visit.

Knightley finds Frank’s negligence in this matter of propriety most reprehensible: “There is one thing, Emma, which a man can always do, if he chuses, and that is, his duty; not by maneuvering and finessing, but by rigour and resolution.”

Frank also flirts with Emma, giving her and others the impression of falling in love while engaged to another woman he wishes to make jealous for some misunderstanding in their relationship.

This behavior too Knightley finds utterly dishonorable and unmanly, condemning Frank for his duplicity: “So unlike what a man should be!—None of that upright integrity, that strict adherence to truth and principle, that disdain of trick and littleness, which a man should display in every transaction of his life.”

On another occasion when all are attending a ball, Harriet Smith feels awkward having no partner for one of the dances. When Mrs. Weston asks Mr. Elton to escort Harriet Smith on the floor (“there is a young lady disengaged whom I should be very glad to see dancing”), he refuses to condescend and accept a partner he regards as his social inferior.

Rather than please, oblige, and be gracious, Elton invents an excuse: “But my dancing days are over, Mrs. Weston”—a comment he makes shortly after requesting a dance with Mrs. Weston herself.

Everyone is disappointed by the clergyman’s boorishness and feels embarrassed for Harriet until Knightley takes Harriet’s hand to lead her in the dance. A knightly man treats a woman with chivalry and delights in pleasing her—a marked contrast from the “littleness” Elton shows in snubbing Harriet and from the artifice that Frank uses to provoke the jealousy of his fiancée.

While Emma does not relish paying social visits or attending occasions where she finds the company tedious, deliberately avoiding visits to the loquacious Miss Bates or being in the company of the reserved Jane Fairfax, Knightley never overlooks the amenities of civility that require his attendance.

Although he does not enjoy balls, he attends these events, socializes like a gentleman, and—without anyone’s suggestion– voluntarily dances with Harriet to save her from an awkward situation.

While Emma’s brother-in-law complains about the inconvenience of visits to Mr. Woodhouse’s home (“five dull hours in another man’s house, with nothing to say or to hear that was not said and heard yesterday”), Knightley regularly visits to pay the office of a good neighbor and gentleman to a lonely, elderly man.

Though Mr. Knightley does not belong to King Arthur’s court or swear the vows professed by a knight of the Middle Ages, he exemplifies noble manhood by his candor, integrity, graciousness, chivalry, and honor.

Always magnanimous, he never stoops to small-mindedness or lowers himself to the flattery or disdain of Elton, the artifice and deviousness of Frank Churchill, or the trickery of inviting compliments or seeking the center of attention of Emma.

This is an ideal of manhood and knighthood for all ages.