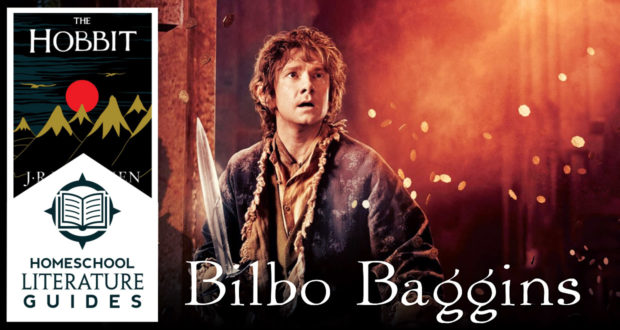 A Heroic Burglar: Meeting Bilbo Baggins from ‘The Hobbit’ | A Literature Guide for Homeschool Parents & Children

Bilbo, a simple hobbit who enjoys the contentment of his modest home and its cozy comforts, has no great aspirations, seeks no glorious adventures, and has no fantasies about a more perfect life.

With the daily pleasures of his pipe, tea, and favorite chair and quiet existence, Bilbo is most at peace to stay at home and follow the familiar rhythms of his ordinary life with no desire for change or travel.

“Sorry! I don’t want any adventures, thank you,” Bilbo protests to the Dwarves who come to recruit his services in their daring exploit to retrieve the ancient gold stolen by Smaug the dragon.

Although the idea of a heroic expedition has never entered the mind of Bilbo, Gandalf the wizard recognizes in the hobbit talent and potential Bilbo has never considered.

Gandalf explains his choice: “There is a lot more in him than you guess, and a deal more than he has any idea of himself.” The Dwarves need a fourteenth man for their venture to avoid the bad luck associated with the number thirteen, and they have in mind someone quiet, composed, and not easily excitable, one with the skills of an accomplished burglar.

Although Bilbo has never viewed himself in this light and even though one of the skeptical Dwarves observes, “He looks more like a grocer than a burglar,” something about the adventure captures Bilbo’s imagination– fascination with handcrafted masterpieces of beauty like the jeweled hilts of ancient swords and secret maps that lead to buried treasure troves.

Reluctant and indifferent at first, Bilbo finally agrees but with the voice of caution and prudence: “Also I should like to know about risks, out-of-pocket expenses, time required and remuneration, and so forth . . . What am I going to get out of it? And am I going to come back alive?”

Promised that he will receive one fourteenth of the treasure, Bilbo warily accepts the Dwarves’ offer to play the part of stealthy burglar going undetected into the dragon’s cave and discovering the lost treasure.

Once he leaves his hobbit hole, Bilbo soon learns the distinction between a complacent existence and an adventurous life.

Bilbo discovers that adventures are filled with surprises and unforeseeable events and bring a mixture of good fortune and bad luck. He enjoys the merry company, storytelling, singing, and meals but dreads the lonely landscape, the gloomy darkness, the unpopulated environment, and the steep hills.

Sometime he reflects that “adventures were not so bad after all,” and other times he thinks “I wish I was home in my nice hole by the fire, with the kettle just beginning to sing!” An adventure brings him in contact with all of life.

Bilbo’s first misfortune comes in the attack of the Trolls who capture the Dwarves in sacks and ponder how to devour them. But in the following adventure the Dwarves receive the hospitable welcome of the Elves: “All of them, the ponies as well, grew refreshed and strong in a few days there. Their clothes were mended, as well as their bruises, their tempers, and their hopes.”

Once committed to his contract, however, Bilbo always goes forward on his journey and never reneges on his word or lets discouragement tempt him to return home. An adventure always looks ahead, never behind.

Bilbo experiences chilling cold, terrifying thunderstorms, and the dangers of giants hurling rocks. They walk into a cave for shelter only to suffer attacks from the Goblins striking them with whips and imprisoning them in dungeons.

Bilbo falls in the dark, hits a rock, and loses consciousness. He awakens with no awareness of the situation: “Just imagine his fright! He could hear nothing, see nothing, and he could feel nothing except the stone of the floor.” Seeing no goblins and no dwarves and having no idea of what to do next, Bilbo makes one resolution: he will not go backward or sideward but forward: “Only thing to do!”

As he crawls forward in the tunnel, his hands touch an object, a ring that he puts into his pocket whose secret he does not know. When Bilbo encounters the vicious and cunning Gollum ready to ensnare his victim by outwitting him in a riddle contest, Bilbo amazingly wins, “saved by pure luck.”

This notion of the gift of luck had never entered Bilbo’s mind until this moment, a truth learned in the spirit of adventure.

The ring he found by chance in the dark also proves to be a stroke of good luck, a magical ring that makes the wearer invisible—an essential weapon for the defeat of the dragon and the recovery of the Dwarves’ gold. To participate in an adventure invites the coming of good fortune. “Fortune favors the brave” as the Roman proverb states.

No one experiences the strange mystery of luck, often called the nickname of Divine Providence, by remaining in a hobbit hole. With the magical ring Bilbo invisibly follows Gollum to find a passage that leads out of the darkness of the tunnel. While Gollum blocks the entrance since he has no way of capturing Bilbo with the ring of invisibility, Bilbo, bold and resourceful, jumps over Gollum: “No great leap for a man, but a leap in the dark. Straight over Gollum’s head he jumped, seven feet forward and three in the air.”

While one dwarf murmurs of Bilbo, “He has been more trouble than use so far,” none of them imagined Bilbo’s imaginative escape from Gollum, great good fortune, and intelligence in outmaneuvering the guards. Adventures test a person’s mettle and force a person to use his mind, body, and heart to the utmost. The Dwarves no longer look at Bilbo as a mere grocer of more trouble than use but as a heroic leader.

Bilbo’s adventures develop his noble nature, moral courage, and steadfast perseverance. If Bilbo does his part, performs his duty, uses his natural talents, acts with pure motives, and goes straight, not sideways or back, graces and blessings follow in many surprising forms. As the wizard advises, “Straight through the forest is your way now. Don’t stray off the track!”

By continuing on the journey Bilbo encounters other interventions of good fortune, once by the Eagles who deliver them from the Wolves— the birds coming to the rescue as act of gratitude for Gandalf’s healing of their lord—and another time by the providential help of Beorn offering ponies, food, and weapons as they travel through the forest to Smaug’s cave.

The outcome of an adventure depends on doing one’s part to the utmost of his ability and trusting in chance.

After Bilbo slashes the Spiders and again protects the Dwarves from rapacious enemies, the Dwarves begin to grasp the secret of Bilbo’s strange power, “for they saw that he had some wits, as well as luck and a magic ring.”

When the Dwarves are captured by the Wood-Elves and put in dungeons, Bilbo uses his wits to hide the escaped prisoners in wine barrels to float them on the river to safety. He uses his ring of invisibility to steal the keys of the prison from the drunken guard sleeping on duty.

He trusts in luck to bless his efforts and discovers that all have escaped unharmed from the dungeon.

In the climax of the story Bilbo dares to enter the dragon’s cave and see the hoard of treasure where Smaug sleeps. The Dwarves now expect Bilbo to play the part of the silent burglar to locate the dragon. On the first trip to the cave Bilbo finds the dragon and the treasure: gems, coats of mail, axes, helmets, swords and spears. He brings back a jeweled cup as proof.

The second time Bilbo descends, he learns of the vulnerable spot under the dragon’s belly that leads to Smaug’s death. Panicked because of the dragon’s wrath and retaliation at the loss of the stolen cup, the Dwarves expect to perish with all tunnels blocked with broken rock.

Thorin despairs : “I think I would rather be smashed by Smaug in the open air than suffocate in here!”

Again he makes use of the invisible ring, descending a third time into Smaug’s cave and this time selecting the precious Arkenstone from the treasure, a gem that ultimately brings peace among all the Elves, Dwarves, and Lake-men demanding a share of the treasure when Bilbo parts with the prize for the sake of peace.

For all his heroic deeds and courageous leadership beyond the call of duty, Bilbo receives the highest praise, but the best compliment comes from Thorin: “If more of us valued food and cheer and song above hoarded gold, it would be a merrier world.”

When called, chosen, and blessed, even Hobbits can do great deeds and defeat evil monsters.