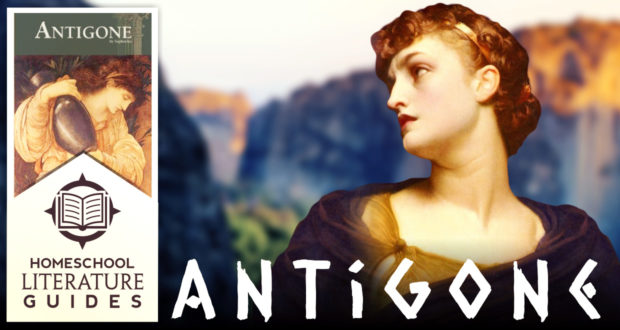 In Sophocles’ Greek tragedy Antigone, the heroine is neither a great warrior nor a powerful ruler but the humble daughter and servant of the blind Oedipus, former king of Thebes who suffered a tragic fall from high to low because of pride.

Her inviolable conscience and bold courage, however, exalt her heroism.

The sister of Eteocles and Polynices, her two brothers killed in a civil war (the Seven against Thebes), Antigone suffers a moral crisis that tests the integrity of her conscience and demands extraordinary fortitude. Fighting on opposing sides in the civil war, Eteocles and Polynices waged battle for the succession to the throne.

After the tragic fate of their father Oedipus, now in a state of exile and blindness in the care of Antigone, Creon assumed power. Although both brothers die in battle, Creon bestows military honors on Eteocles, his loyal ally, and grants him a solemn burial.

The king, however, despises Polynices for treachery and refuses all burial rites for his enemy.

Antigone summarizes the situation: Creon “forbids anyone to bury him, even mourn him. He’s to be left unwept, unburied, a lovely treasure for birds that scan the field and feast to their heart’s content.”

Acting tyrannically and presuming that might makes right, Creon decrees that cruel punishment awaits anyone who defies his orders about Polynices’ body: “Whoever disobeys in the least will die, his doom is sealed: stoning to death inside the city walls!”

Antigone, however, cannot respect the political authority of the king or tolerate the immorality of his decision, one that violates the most basic meaning of justice. All persons, friend or foe, by virtue of their dignity as human beings, deserve the right to a burial, especially a beloved brother.

When Antigone approaches her sister Ismene and asks for help in lifting the body and burying it, Ismene feels bound by the law of the land and dares not disobey the king’s ruling: “What? You’d bury him—when a law forbids the city?”

Keenly aware of all the tragedy in their family, the blindness of their father Oedipus, and the deaths of their two brothers, Ismene cannot tolerate the idea of either her or Antigone also losing their life. Ismene calls Antigone’s attempt to bury their brother irrational, wild, rash, and reckless: “It’s madness, madness.”

In Ismene’s mind the legal is the same as the moral.

In Antigone’s mind, however, her burial of Polynices and defiance of Creon do not express lawlessness, insolence, or treachery but duty, justice, and piety. Even without Ismene’s cooperation Antigone follows her conscience and performs a simple burial rite covering her brother’s body with dirt and pouring libations to the gods.

The news of Antigone’s deed provokes the wrath of Creon who accuses her of betrayal, treachery, and sedition, denouncing her as a “traitor” and “viper,” as an enemy of the state deserving arrest and execution.

In her self-defense Antigone invokes the natural law written on the human heart and the eternal law decreed from time immemorial by God as the justification for the burial of Polynices and her disobedience to Creon’s unjust human law:

Nor did I think your edict had such force that you, a mere mortal, could override the gods, the great unwritten, unshakable traditions. They are alive, not just today or yesterday: they live forever, from the first of time, and no one knows when they first saw the light.

In Antigone’s mind man-made human law is not absolute or binding if it does not conform to the moral law inscribed in man’s nature, his reason and conscience.

The Duty of a Hero

Just as the natural law, man’s inborn knowledge of right and wrong, derives from the eternal law, so too human law has its origin in natural law and eternal law. To cite St. Thomas Aquinas, Mala lex, nulla lex (a bad law is no law at all): no one is obligated to obey an unjust law.

As Antigone argues, “No matter—Death longs for the same rites for all.” On the basis of of natural law and human reason, all human beings by virtue of their dignity deserve a burial because they are persons, not animals.

Rather than follow Ismene’s cowardly example of passive acceptance or cringe before Creon’s wrathful intimidation, Antigone does her moral duty to her brother, defies Creon’s unreasonable law, and suffers the consequences of disobedience—imprisonment and death.

The Cry of the People

While Creon justifies his law forbidding the burial of Polynices and punishing Antigone with the claim that the gods never honor traitors or anarchists or approve of pride and willfulness, Antigone never doubts the righteousness of her decision. She never reneges on her sisterly commitment to her brother or questions the higher laws of the gods that supersede unjust human laws.

Imprisoned while she awaits her death sentence by stoning, Antigone’s love of justice and reverence for God’s eternal law inspires and moves all in Thebes to defend her innocence and protest Creon’s cruelty: her fiancé Haimon, the citizens of Thebes, Tiresias the prophet, and ultimately Creon all see the truth of natural law.

Creon’s son Haimon intercedes on her behalf, pleading with Creon that his king’s rights “trample down the honors of the gods.”

The leader of the Chorus, who represents the voice of common sense and right reason, reports that the whole city weeps for Antigone and identifies with her compassionate deed: “ ‘No woman,’ they say, ‘ever deserved death less, and such a brutal death for such a glorious deed’.”

They defend her greatness as a hero deserving glory, not punishment: “Death? She deserves a glowing crown of gold.”

Throughout her trial Antigone asks, “What law of the mighty gods have I transgressed?” Tiresias the prophet also blames the rash, blind judgment of Creon, reminding him of the sin of pride as a great crime—a violation of the moral law proclaimed at the oracle of Delphi: “know thyself” and “nothing in excess.”

By presuming that man’s law prevails over natural and eternal law, Creon lacks self-knowledge—the truth that man is below the gods and above the animals. By his wrath and vengeance, Creon also violates the Greek moral ideal of temperance known as “the golden mean” of moderation that combats excess.

Truth Will Always Out

In the clash between tyrannical human law and just natural law, between man’s pride and the gods’ power, the truth ultimately prevails. When Creon finally relents and sends word for Antigone’s release from the tomb, tragedy has already accomplished its evil destruction.

Both Antigone and Haimon are discovered dead—“and the boy, his arms flung around her waist, clinging to her, wailing for his bride.”

The story of Antigone’s defense of human justice, the natural law, and human dignity is a lesson for all ages. Political leaders or judges who assert that “man is the measure of all things,” that is, that man, not God, determines the meaning of right and wrong and defines justice and injustice, also bring social anarchy and tragic suffering to a society.

Whether it is the Dred Scott v. Stanton (1857) Supreme Court decision that legalized slavery, the Buck v. Bell (1927) ruling that legalized sterilization because “Three generations of imbeciles is enough,” the Roe v. Wade (1973) decree that legalized abortion on the basis of the right to privacy “implied in the penumbra” of the U.S. Constitution, or the recent Obergefell v. Hodges decision that invented a new definition of marriage as a matter of equality under the law for the personal fulfillment of all people without discrimination—the specious reasoning is the same: only man, neither God nor Nature, is the arbiter of life and death and judge of good and evil.

But as Greek tragedy testifies, the laws that apply to Creon, Antigone, and Eteocles remain true for all ages in all times and for all people.

Man’s nature is moral. The truth about right and wrong is inscribed in man’s mind, heart, and conscience. Might is never right. Truth will always out. An unjust law is no law at all.

The world will always need the Antigones who will fearlessly love the truth, defend the truth, and suffer for the truth.