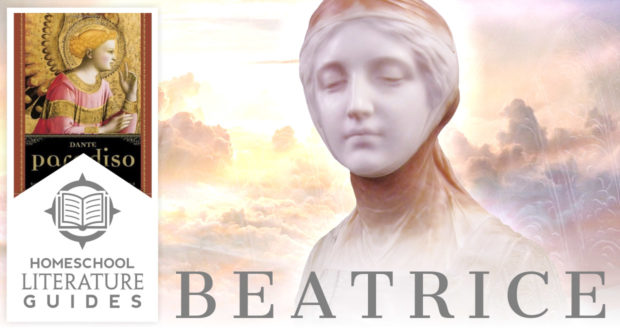 As Dante the pilgrim travels through Inferno, Purgatory, and Paradise in his spiritual journey from the dark wood in the forest to the Beatific Vision in Heaven, God appoints him two guides: the epic poet Virgil, the image of classical reason; and Beatrice, the symbol of divine grace.

God does not leave man without teaching or direction.

Led through the ‘Inferno’

Virgil leads the pilgrim through the dark, violent regions of Hell for Dante to understand God’s justice with intelligence and not react to it with sentimentality.

When Dante pities the adulterous lovers Paolo and Francesca punished in the Inferno by stormy winds hurling them constantly from place to place—an image that corresponds to their wild passions of lust—Dante’s impulse is to grieve with them and melt with tears at their plight.

He addresses Francesca, “your torments move/ my heart to weep in pity for your gain.”

Fainting at the sight of the woeful lovers after hearing their tale, Dante’s emotional reaction to the suffering of the lovers and later to the misery of others in Hell needs the correction of Virgil’s voice of reason: “How is it your mind/ goes madly wandering so far from itself.”

He explains that the damned do not suffer the torments of God’s cruelty but have inflicted these punishments on themselves and freely chosen Hell.

Dante learns from Virgil’s teaching that the reasonableness of God’s justice is that it does not violate man’s free will, God’s greatest gift to humanity.

Guided through the ‘Purgatorio’

Virgil tells Dante that Beatrice, “so lovely and blest a lady,” summoned him to serve as Dante’s guide through the regions of Inferno and Purgatory.

Her luminous eyes and angelic voice petitioned Virgil to lead the pilgrim on the right path and rescue him from wandering in the wilderness of the forest and from a life of disordered desires leading him away from the way to Paradise: “Go then, and with the beauty of your words, / and any skill you have to set him free, help him, that I may be consoled.”

Beatrice will assume the role of Dante’s mentor and educate him in the truths of faith after Virgil enlightens his reason with the truths of classical wisdom.

From her life in Heaven Beatrice serves as a source of grace, one who prays and intercedes for Dante and the salvation of his soul.

Toward the end of his ascent to Mount Purgatory, after Dante has been purged of the seven deadly sins that have burdened and enslaved him, he beholds Beatrice just prior to his entrance into Paradise.

Recalling Beatrice’s image from his earthly life when he beheld her earthly beauty, goodness, and purity as glimpses of the heavenly world, Dante sees with wonder the regal splendor of her transfigured body wearing a white veil and surrounded by a mist of flowers.

He confesses to Virgil that he trembles “mute with awe” and melts by “the great power of all its ancient love.” Dante feels a sense of unworthiness when Beatrice confronts him with direct speech and severe words that remind him of a mother reproaching her son: “Look at me well! I’m Beatrice, I am she!”

She expresses disappointment at Dante’s loss of the heavenly vision he once identified in her beauty and love before her early death. Why did Dante lose heart and go astray: “What trenches did you meet, what chains or rope/ did you find barring you from passing on,/that you should have divested all your hope?”

Beatrice reprimands Dante for viewing the heavenly vision of her divine beauty as an illusion or deception and blames him for turning his gaze upon worldly pleasures (“a pretty lady or a new delight/So brief in its enjoyment”) in place of a contemplation of divine realities: “Instead you should have followed me on wing.”

Contrite and humble, the handmaidens of Beatrice sprinkle Dante with the four cardinal virtues and three theological virtues. They purify Dante’s vision so that he may now gaze into the “emeralds” of Beatrice’s eyes, a light that radiates the glory and splendor of the ineffable beauty of Paradise.

The severe look of Beatrice then changes to an eternal smile—a sight that moves Dante to admire, delight, wonder at, and contemplate a miracle inexhaustible in its fullness. His gaze compares to a looking directly into the sun that blinds the eyes: “You stare too fixedly!” one of the handmaidens interjects.

When Dante returns to his senses, Beatrice leads him gradually through the heavenly circles of paradise and unveils for him the divine mysteries that unaided reason without faith and grace cannot know.

With his education in reason and grace through his two great teachers, Dante feels the inspiration to write of man’s road to God: “Once returned, be sure to write down everything you see.”

Up into the ‘Paradiso’

Led into Paradise by Beatrice, Dante’s education illuminates his understanding of the mysteries of love’s law. Amazed at the acceleration of his speed as he travels through the circles of the heavenly spheres, Dante is puzzled.

Beatrice explains to Dante that his rapid traveling upwards should not surprise him any more than “a mountain stream/ should rumble rushing to the plains below.” Just as smoke rises up and water flows down because their nature orients them in these directions, man too is created to rise above to heaven and to contemplate the Beatific Vision.

Dante learns from Beatrice’s explanation of three mirrors that the law of love resembles the physics of light by its communicative and diffusive nature.

Just as mirrors receive and reflect light (“you shine/ a light that kindles all three in a blaze/ and ricochets the radiance back to you “), love in heaven is the eternal procession of giving and receiving love—like a hive in which bees are always coming and going in producing honey and also like the generation of love between Father, Son, and Holy Spirit.

Another truth Dante learns that overcomes his simplistic “thinking like a child” that Beatrice corrects is that ambition, aspiration, and competition do not exist in Paradise.

Those on the more distant of the concentric circles further away from the vision of God at the center do not strive to move closer: “brother, the virtue of our charity/brings quiet to our wills, and so we desire/ but what we have, and thirst for nothing else.”

Although God’s abundant graces are not distributed equally but proportionately, Dante discovers that “in his will is our peace” and “everywhere in Heaven is Paradise.” He beholds the unending nature of pure joy as he sees radiant smiles, happy eyes, and cheerful spirits everywhere that he compares to a pond of fish swimming for food “more than a thousand splendors all aglow.”

Dante is enchanted by the heavenly melodies and circles of dancers adding joy to joy, producing not only the harmony of the music of the spheres but also “holy bliss.” Like birds in flight “in a circling flock or other form,/ So in those lights the saintly creatures flew, and as they flew about they sang for joy.”

Even though Dante learns that man’s mind cannot comprehend the mysterious abyss of God’s love any more than the naked eye can penetrate the depths of the sea, Paradise is designed for man’s happiness, fulfilling man’s desire for truth and his desire for love.

As Dante completes his journey into Heaven and beholds its fires of love, splendors of beauty, and overflowing charity, he knows that no language, story, or expression of man’s greatest art can capture the reality of the ineffable and transcendent: “Whatever human speech can convey/ must yield to vision.”

Just as Dante can look forever into the beautiful eyes of Beatrice and marvel at the sweetness and loveliness of her holy smile that reveals the depths of purity and goodness, he can only gaze, contemplate, and wonder at the fullness of Heaven’s glory and the superabundance of God’s love without end.