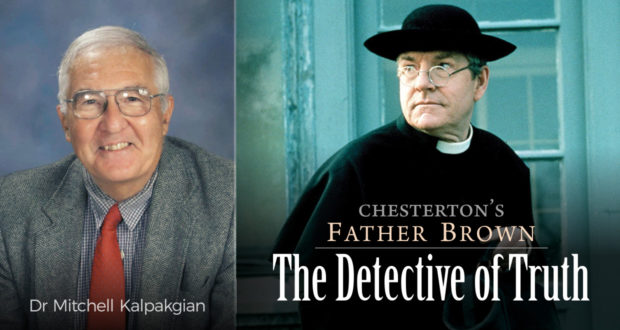 He is not fooled because he uses both faith and reason in his thinking while others attempt to reason without a knowledge of God or believe in superstition without exercising intelligence.

Theories From the Facts

In Chesterton’s “The Hammer of God,” one witness of the dead body assumes that the appearance of things corresponds to the truth: a man is found dead with a broken skull that seems the blow of a jealous blacksmith using a big hammer and exacting revenge.

Another person offers the theory that the wife of the jealous husband is as capable of violence as an irate man.

Another person’s explanation of the crime identifies the village idiot as the likely suspect because the dead man openly ridiculed him by throwing pennies into his open mouth. Father Brown offers no grand ideas, pre-conceptions, or pet theories as he witnesses the state of the dead man and all the speculation that surrounds the murder.

Father Brown seeks the real truth and waits for various facts, evidence, and observations to converge to illuminate the mind and provide certitude about the objective nature of reality.

Colonel Norman Bohun, the drunken, womanizing brother of the Rev. Wilfrid Bohun, an Anglican priest distinguished for his piety, lies dead on the street—the victim of a blow to his head by a hammer that smashed both his head and the helmet he was wearing, his skull “a hideous splash, like a star of blackness and blood.”

All the inhabitants of the village speculate about the possible murderer. Mr. Gibbs, the cobbler and an atheist, assumes that only the village blacksmith could have delivered the powerful blow with a heavy hammer and mighty arm. He suspects him of the crime because Norman Bohun’s philandering with the blacksmith’s wife provoked jealousy. In the cobbler’s judgment only a strong man with a blunt instrument could have inflicted such damage to both the broken skull and the helmet, “smashed to bits like an egg shell.”

He accuses Simeon Barnes, the village blacksmith, as the only possible suspect for the crime. These impressions, however, do not correspond with the actual facts.

The inspector begs to correct the cobbler, for the hammer that murdered Colonel Bohun lies beside the body, a small, light tool, not the instrument of a blacksmith. Also other witnesses testify that the blacksmith was in another town during the day of the murder. Appearances do not always correspond to the truth. If a light hammer broke the skull of Norman, then the wife of the blacksmith perpetrated the crime.

So argues the doctor, reasoning “Nine times out of ten the person who hates the wife’s lover is the wife.” While this theory (“mental science”) sounds plausible to Father Brown because of fallen man’s capacity to sin, it defies the laws of nature (“physical science”).

He agrees that “a woman will always pick up a smaller hammer instead of a bigger one,” but the possibility of a woman shattering a skull and helmet with a small hammer contradicts the laws of science: “No woman ever born could have smashed a man’s skull out flat like that.”

Father Brown knows that truth conforms to reason and does not defy the nature of things and that theories must explain all the facts.

Rev. Wilfrid Bohun proposes a new idea to explain the shocking death of his brother after the doctor observes that no murderer “but an idiot” would use a small hammer to commit the deed when he could deliver the blow with a big hammer.

At the sound of the word “idiot,” the Anglican priest proposes Joe, the village idiot, as a likely suspect of the crime. He cites as evidence the fact that Joe was praying in the church just prior to news of the murder and suspects that a madman prays with a deranged mind, “all upside down.” He finds the idea of a lunatic praying before killing a man hardly unreasonable.

He recalls a possible cause for Joe’s irrational use of violence, Colonel Norman’s ridicule of Joe—a behavior that took the form of the colonel throwing coins into Joe’s gaping mouth. While Father Brown remarks, “By golly, I think you’ve got it,” he is not convinced. While Wilfrid accounts for all the facts, his theory is hardly credible—a violent murder by a harmless man?

Wilfrid assumes he has solved the case and figured out the riddle: while the blacksmith would not have used a small hammer or the wife a big hammer, “the madman might have done both.” He argues convincingly before Father Brown and the doctor that “a maniac in his paroxysm might have the strength of ten men.” Yet Father Brown only finds the explanation clever and convenient, especially the aspect that mad Joe cannot be held accountable for the crime because of his mental state.

A serious crime has been committed, and the only suspect is not punishable by law—a most convenient scapegoat.

Get the Fr. Brown Reader Set from SetonBooks.com!

While the blacksmith proves his innocence by his absence from the scene of the crime, he also satirizes the case against him: “My hammer hasn’t any wings that should come flying half a mile over hedges and field.” His jesting statement, however, provides Father Brown a telltale hint of the actual crime and the real murderer, especially when Wilfrid assents to the blacksmith’s theory of the crime.

The Calvinist blacksmith interprets the death of Norman as God’s direct punishment from heaven, a sinner in the hands of an angry God: “I believe that One who walks invisible in every house defended the honour of mine, and laid the defiler dead before the door of it.”

The Anglican Wilfrid also sees his brother’s death as the possibility of as divine retribution: “I told Norman to beware of the thunderbolt.” Father Brown again is not deluded by theoretical speculations or abstract theories that defy natural laws: “The force that smashed that skull was a force well known to scientists—one of the most frequently debated of the laws of nature.”

He objects to the imaginary idea of God’s wrath hurling a thunderbolt to strike Norman Bohun dead, for faith does not contradict reason and God is not arbitrary. The Bible reveals God in history as both reason (truth) and will (love), not as randomly capricious. Recalling the blacksmith’s joking reference to a hammer with flying wings flying, Father Brown looks above at Wilfrid’s church and asks to see its Gothic architecture.

As he looks down from its heights and sees the village below, he sees that a hammer dropped from such a great distance and with increasing velocity becomes a fatal weapon. He hints to Wilfrid that a man who inhabits dizzy heights in the atmosphere of belfries and spires soon sees all human beings below as insects and develops airs of spiritual pride.

A man in this lofty position, Father Brown continues to explain, no longer kneels with other sinners on the floor but adopts the pose of a divine being who “fancied he was God” and “thought it was given to him to judge the world and strike down the sinner.”

Amazed that Father Brown has uncovered his guilt as the murderer of his brother, Wilfrid can only ask, “How do you know all this? Are you a devil?” Father Brown’s answer is as simple as the truth itself: “I am a man; and therefore have all devils in my heart.”

Father Brown is just realistic about the nature of fallen man and the fact of original sin as he is scientific about the laws of gravity. He is not fooled because he knows the weakness of man and the many temptations of sin, “all the devils” in the heart that appear in the form of the seven deadly sins, especially the sin of pride in Wilfrid.

He is not fooled because he falls on his knees looking above at God in humility rather than hiding in lofty churches looking down with pride and seeing human beings as insects.