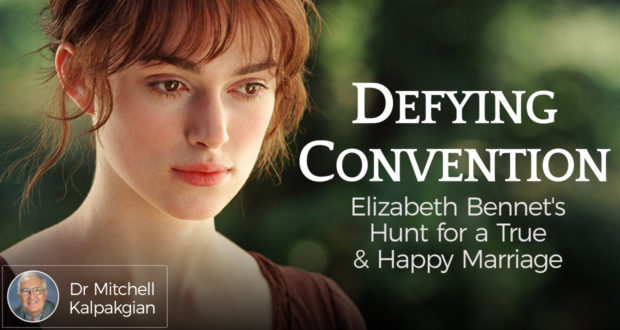 In Jane Austen’s England (1775-1817), society and convention encouraged marriage for many worldly reasons and selfish motives.

A “proper match” meant a gain in a woman’s economic status and social respectability. She no longer had to feel financially dependent on her family or embarrassed by the stigma of old maid.

A common assumption of the time held that, practically speaking, a woman should accept a marriage proposal even without attraction, admiration, or love for her husband.

No Moral or Romantic Considerations

In Austen’s Pride and Prejudice, Elizabeth’s friend Charlotte Lucas explains her primary motive for marriage, disregarding the moral and romantic considerations of love: “I am not romantic you know. I never was. I ask only a comfortable home; and considering Mr. Collins’s character, connections, and situation in life, I am convinced that my chance of happiness with him is as fair, as most people can boast on entering into the marriage state.”

Charlotte’s marriage promises to improve her social image, financial security, and sense of independence. Another common belief of the day held that a sensible woman accepts the first proposal lest she never receive another offer.

Elizabeth’s mother warns her, “But I tell you what, Miss Lizzy, if you take it into your head to go on refusing every offer of marriage in this way, you will never get a husband at all.”

Elizabeth’s ideal of marriage, however, goes beyond the social and economic advantages that influence Charlotte and Mrs. Bennet. Without ignoring the role of money and social class in marriage, she prizes the romantic and moral value of love more than its perquisites. In Elizabeth’s eyes natural attraction, equality of mind, shared ideals, and mutual respect form the real foundation for happy marriages.

Quite unexpectedly Elizabeth receives two offers of marriage that have no foundation in love, romance, or “esteem,” a high regard for a person’s moral character. Elizabeth finds both proposals abrupt, irrational, and premature.

Mr. Collins, an Anglican clergyman patronized by the aristocratic Lady Catherine de Borough, pays a visit to Elizabeth’s family to select a wife. He hopes to gain the approbation of his patroness who recommends marriage for reasons of propriety.

As a cousin who will inherit the Bennet estate, Collins appears to come as an act of good will to request the hand of one of the Bennet daughters to share the family fortune. When he proposes to Elizabeth, he declares, “Almost as soon as soon as I entered the house I singled you out as the companion of my future life.”

Assuming that Elizabeth will naturally accept his offer as a proper match for all the prudential reasons and practical benefits that motivate women’s choices, Collins acts incredulous when he hears Elizabeth’s firm refusal: “I am very sensible of the honour of your proposals, but it is impossible for me to do otherwise than decline them.”

Collins has not won her heart, proved his worthiness, or earned Elizabeth’s respect. Elizabeth cannot imagine herself married to a pompous, silly, worldly man like Mr. Collins because she does not approve of his small mind and petty motives. Instead of wooing or courting his wife-to-be, Collins conducted love as a matter of business. Elizabeth cannot esteem a man whose mind and character lack honor and manly virtue.

Elizabeth hears from Collins the same warning Mrs. Bennet offered. He too advises Elizabeth, “[I]t is by no means certain that another offer of marriage may ever be made you.”

The Last Man in the World…

However, moral principle rather than expediency shapes Elizabeth’s decisions. Even though Elizabeth does indeed receive another offer of marriage, an even more handsome proposal from Mr. Darcy, a wealthy and sophisticated aristocrat with a large estate and elegant home, she refuses this opportunity with the same forceful conviction she rejected Collins’ offer: “. . . I had not known you a month before I felt you were the last man in the world whom I could ever be prevailed on to marry.”

Elizabeth finds Darcy’s character objectionable for many reasons. His manners are boorish. Like a snob he refused to socialize, converse, or dance with any of the women attending the ball because, in his words, none of the women were “handsome enough to tempt me.”

Darcy meddled in Elizabeth’s sister Jane’s romance with Darcy’s best friend, Mr. Bingley, discouraging any romance with a family of lower social status. Without earning Elizabeth’s respect, proving his honorable character, or conducting any form of courtship to give Elizabeth even the slightest hint of his attraction or interest, he overwhelms her with a hasty proposal that she never expected or encouraged: “In vain have I struggled. It will not do. My feelings will not be suppressed. You must allow me to tell you how ardently I admire and love you.”

Again Elizabeth cannot assent to marriage because her heart remains unmoved. No courtship or romance has prepared the ground for a proposal. Darcy has not provided any authentic proof of a man in love.

In Elizabeth’s case, however, she receives a third offer of marriage—a second proposal from Darcy under a different set of circumstances. After angry words and misunderstandings caused by the faults of Darcy’s pride and Elizabeth’s prejudice, their paths cross again by accident when Elizabeth accompanies her aunt and uncle to a visit to Pemberley Woods, the ancestral home of the Darcy family.

Even though she pays the visit with the assurance that Darcy is absent, he returns earlier than expected. Awkward and delicate as the situation is for both of them, Darcy this time impresses Elizabeth by acting like a gracious gentleman.

After remembering Elizabeth’s refusal of marriage and her reproof of his earlier unsociable manners, Darcy has changed his conduct to please Elizabeth. He greets her with amiable friendliness, initiates conversation, inquires about her family, and acts hospitably to Elizabeth’s uncle and aunt, Mr. and Mrs. Gardiner. His warm welcome contrasts dramatically with the formal stiffness and cold civility he displayed earlier.

Embarrassed at this unexpected meeting, Elizabeth is quickly relieved by Darcy’s cordial courtesy:

“That he should even speak to her was amazing!—but to speak with such civility, to enquire after her family! Never in her life had she seen his manners so little dignified, never had he spoken with such gentleness as on this unexpected meeting.”

All of Elizabeth’s new impressions of Darcy correspond with the report of the family housekeeper who gave them a tour of the home: he was the best of brothers, the most respected of landlords, and “the sweetest-tempered, most generous-hearted boy in the world” during his youth. Elizabeth knows that the praise of a loyal family servant carries great weight.

After this new introduction, a real courtship begins between Darcy and Elizabeth that climaxes in a natural falling in love. Darcy invites Elizabeth to meet his sister and asks the aunt and uncle to dinner.

Later Darcy intercedes on behalf of Elizabeth’s foolish sister Lydia who elopes with Wickham on the promise that he will marry her—a scandalous affair that brings disgrace to the whole Bennet family. Wickham, dishonorable and insolvent, has no intentions of marriage until Darcy intercedes to pay his debts on condition that he marry Lydia. Although Darcy does this kind deed quietly and anonymously with humility, Elizabeth accidentally learns of his disinterested generosity and falls even more in love with him than by his manners at Pemberley.

Elizabeth quickly discerns that “she was still dear to him.” Darcy’s magnanimity in overlooking Elizabeth’s refusal of his first proposal, his quiet efforts behind the scene to persuade Wickham to marry Lydia, and his largeness of mind to forgive and forget the past makes Elizabeth reconsider marriage to Darcy: “Such a change in a man of so much pride, excited not only astonishment but gratitude—for to love, ardent love, it must be attributed.” She is moved to fall in love because she is assured that Darcy truly loves her.

Elizabeth, then, marries for love, not advantages. Unlike Charlotte, she marries for romantic reasons, not for a comfortable living situation.

Unlike Mr. Collins who will marry anyone who will accept him within a two-week visit, Elizabeth with discernment marries the right person after a period of courtship that convinces both her mind and heart that she is truly in love: “She respected, she esteemed, she was grateful to him, she felt a real interest in his welfare.”

Unlike the conventional thought of the day that tempts women to marry the first person who proposes, Elizabeth’s moral principles prove that saying no for the right reasons does not make a woman an old maid but leads to true romance and a happy marriage.