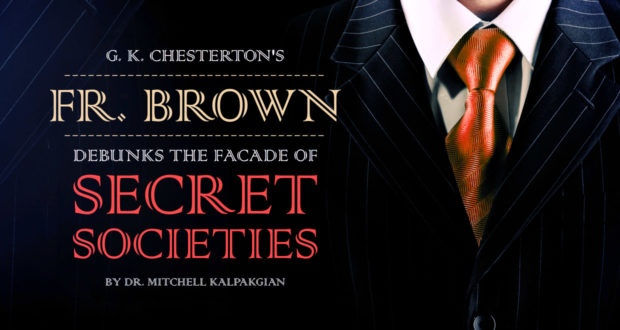 Exclusive Societies and Universal Churches: The True and False Arts of Living

In G. K. Chesterton’s “The Queer Feet,” one of the Father Brown detective mysteries, a select group of men known as “The Twelve True Fishermen,” meet once a year for an annual club dinner at the fashionable Vernon Hotel.

Highly selective, the restaurant fastidiously limits its dining area to twenty-four, a single reserved table placed outdoors on a terrace with a view of the most famous gardens in London. The privileged members of the club hold their yearly dinner only at this exclusive hotel, special table, and appointed time.

Too Clean for a Dirty World

During the dinner, which always specializes in the choicest of fish recipes, the members dine with the most expensive of cutlery, all the wealthy men “exposing all their treasures, as if they were in a private house, especially the celebrated set of fish knives and forks which were, as it were, the insignia of the society, each being equally wrought in silver in the form of a fish, and each loaded at the hilt with one large pearl.”

The waiters at the hotel also belong to an elite profession famous for their service, savior-faire, and professionalism, a select group of fifteen highly accomplished servants remarkable for their unobtrusive efficiency, each “trained in terrible silence and smoothness, as if he were a gentleman’s servant.”

The members of the club have no charter, mission statement, or agenda. They belong to the organization because it gives them a sense of belonging to an eminent oligarchy. Their membership separates them from the masses and surrounds them with refinement, elegance, and good taste. Their distinction gives them a sense of cultural superiority and aristocratic standards that they equate with moral excellence and social status.

They live in a more untainted atmosphere free of the low, commonplace, and tawdry elements of the hoi polloi that cheapen life. Dining in a private club limited to a few connoisseurs at a luxurious restaurant at a table reserved for only the most affluent guests at a remote location, the Twelve Fishermen have, in effect, removed themselves from the human race and occupy a rarefied atmosphere too clean for a dirty world, too refined for a lowbrow society, and too polished for the crude and the vulgar.

While the Twelve Fishermen distance themselves from common humanity and the human condition by their membership into the most exclusive of societies with the most fastidious of standards and most stringent requirements for admission—the best wine, the choicest fish, the most professional waiters, the most elegant restaurant—their purified world does not, ironically, remain unspotted.

Death, sin, and theft find their way to the Vernon Hotel when the club members are enjoying their private dinner. When one of waiters suffers a stroke and asks for a priest to administer the final rites, Father Brown is admitted but quickly hidden in a private room between an office and the cloak room to write his report of the waiter’s death.

The proprietor does not want Father Brown seen by the guests, considering his sudden arrival an unpleasant interruption that spoils the perfect setting and decor of the club. The proprietor views Father Brown, with his plain appearance and muddy clothes, as “a speck of dirt,” a “disgrace” that soils the immaculate background and creates an embarrassing “scene” that violates the propriety of the club. An ordinary priest spoils the whole aesthetic effect of the Vernon Club.

While composing his written report in the isolated room (“a house within a house”), Father Brown hears strange noises, the rush of quick, light steps followed by slow, deliberate paces. When he goes from his table to the adjacent cloak room, Father Brown encounters the notorious Flambeau, the artful thief who has posed as a silent waiter to steal the expensive, jeweled forks and knives and make a sudden escape.

Flambeau nervously speaks, “I want my hat and coat, please; I find I have to go away at once.” The Vernon Club has now been infiltrated by a common priest and a notorious villain, its pristine atmosphere and setting spoiled by a sudden death, an unexpected clergyman who forgives sins, and a thief attempting to escape with expensive gems.

With the detection of the crime comes the arrival of the police to apprehend the criminal. The alluring aspect of the Vernon Club as a safe retreat from a fallen world proves to be an illusion that falsifies the human condition. Exclusive societies with contempt for the common lot of mankind are no more protected from the way of the world than the members of the working class.

While human pride seeks membership into elite organizations, secret societies, and inner circles to achieve distinction and establish a class division between the enlightened and the ignorant, these escapes from reality fail. Death, sin, deceitfulness, dishonesty, and theft find their place everywhere, even at the annual dinner of the Twelve Fishermen. Those who do not wish to be contaminated but retreat to live in private, sealed worlds find that the reality of original sin finds them in all places.

Chesterton’s story warns against these exclusive circles of the Illuminati, the modern counterpart to the Gnostics or Manicheans who presume to enjoy higher knowledge and live purer lives than the common man.

In contrast to the Twelve Fishermen who dine at the Vernon Club, the twelve disciples of Christ came from the working class of ordinary fishermen and laborers who represented the cross section of humanity rather than the most cultured or educated. One can belong to a highly selective club or to a universal Church.

Member of a Universal Church

In the figures of Father Brown and the Twelve True Fishermen, “The Queer Feet” illustrates that the greatness of the Catholic Church lies in its universality, not its discrimination.

The Church Christ founded that eliminated the distinction between Jew and Gentile, male and female, and master and servant does not limit its association to members of a particular nation, culture, race, or ethnicity. The Catholic Church attracted both the shepherds and the Wise Men to give glory to God at the Nativity.

The Church that celebrates liturgies in over twenty rites, both Western and Eastern, also teaches that Christ died for all men and women, that God’s love and mercy extend to every person, that God’s Commandments and the natural law apply to all people in all times in all places.

To be a member of an elite class is to breed pride– to think one is more distinguished, more perfect, or more knowledgeable than the average man. To be a member of universal Church, on the other hand, teaches humility– a keen awareness of original sin and the concupiscence or selfish desire that requires moral strength to conquer sin.

To belong to a selective group is to adopt an aura of purity and to identify others with impurity. To belong to a universal Church, however, acknowledges human fallibility, requires a constant examination of conscience, and leads to an understanding of the seven deadly sins that tempt all men. If pride is the deadliest of the seven capital sins, then the snobbishness of exclusive membership is the height of pride.

While many mistake the art of living with elegant dining, membership to select circles, and the company of the elite, the true art of living is to belong to something greater than one’s self like a family, a noble vocation, or a universal Church.