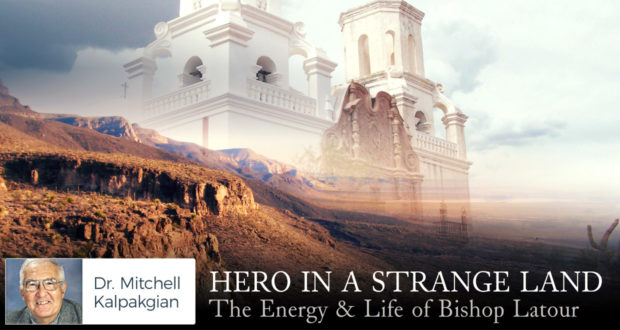 Hero in a Strange Land: The Energy & Life of Bishop Latour

This article explores the life and civilizing passion of the titular character from ‘Death Comes to the Archbishop’ by Willa Cather.

A French missionary priest to the American Southwest in the middle of the nineteenth century, Jean Latour embraces his vocation when appointed the new Bishop of New Mexico.

The cardinals in Rome deliberately select a French priest rather than a native Mexican to address the many problems of the old mission churches: thirty Indian tribes with different languages and cultures; lingering superstitions and pagan beliefs like snake worship; priests living worldly, immoral lives and disobeying their vows; and nominal Catholics who do not live or practice their faith with integrity.

A product of French culture and all its civilized amenities, Bishop Latour finds himself in a primitive, alien land with none of the refinements of the European way of life.

A devout and dedicated priest with great energy and a love of adventure, Bishop Latour accepts with Christian fortitude all the challenges and adversities that face him in the New World.

In the course of a lifetime in the Southwest he accomplishes great things, transforms the lukewarm Catholic faith into a vibrant reality, improves both the religious and cultural life of the native populations by establishing schools, by introducing gardens and orchards, by giving instruction in hygiene and medicine, and by teaching Mexicans and Indians how to manage time to organize their lives.

A comparison of the beginning of Bishop Latour’s governance as bishop to the time of retirement shows the multitude of his good works and his wise leadership. Latour’s accomplishments, however, have no spectacular or sensational features.

He does not live and die as a hero, martyr, or great public figure but as a true priest who performs his duties with charity and humility in the part of the vineyard where he is called to serve.

The good priest simply keeps his vows faithfully, constantly, and diligently. His example illustrates how miraculous changes, extraordinary improvements, and sudden transformations in people’s lives happen because a dedicated priest loved God and neighbor, practiced his role as an alter Christus, evangelized and taught the Catholic faith, and served others with the gift of self in imitation of Christ.

He carries all his crosses with patience, perseverance, and long-suffering, never complaining and never regretting his decision to leave old France and venture into the New World to evangelize all nations—no matter the cost or sacrifice.

As he begins his mission, he travels long distances through monotonous landscape to reach his destination of New Mexico—a journey of thousands of miles that requires a whole year of travel on horseback. Without clear directions and in danger of Indian attacks, he makes his slow way, occasionally wandering off course and once threatened by an inadequate supply of water for both him and his horse.

Upon his arrival in Santa Fe, the Mexican priests assuming their independence from the authority of Rome, do not acknowledge his authority as bishop and even live in schism.

Many of them live worldly or immoral lives that do not conform to the model of a priest committed to the vows of chastity, poverty, and obedience.

Father Martinez, for example, is a womanizing priest who has fathered children. Father Lucero has a notorious reputation for avarice and miserliness. Father Gallegos is a habitual gambler who luxuriates in his riches. Father Martinez defiantly asserts, “We have a living Church here, not a dead arm of the European Church.”

No difficulty or affliction, however, discourages or demoralizes Bishop Latour who never questions his purpose as priest.

Wherever he travels, Latour brings the Sacraments and Catholic teaching to primitive people starved for truth and thirsting for spiritual nourishment. As he soon learns when he reaches a Mexican settlement and requests water, his arrival is a dream come true. A young girl regards his visit as a heavenly visitation: “Such a thing has never happened to us before; it must be an answer to my father’s prayers.”

Throughout the whole book, many events like this episode affirm Latour’s priestly work and validate all his efforts to cultivate the Christian faith in people who have lived a long time without proper instruction or exemplary priests—Catholics for whom the faith is not dead but in need of “the toil of the husbandman.” This episode reassures the bishop that he comes as a messenger of God to people in dire need of faith, hope, and love.

Without priests the Mexicans have improvised the custom of arranging marriages by agreements of cohabitation and have failed to baptize their children—a policy that Father Vaillant, the bishop’s loyal friend and beloved fellow missionary from France, immediately corrects by insisting that the men leave their work in the fields to be blessed with the holy rites of matrimony: “A man can stop work to be married.”

When urged to baptize the children first while the men complete their day’s work, Father Vaillant refuses to accommodate this unnatural request: “No, I tell you, Lujon, the marriages first, the baptisms afterward; that order is Christian.”

Bishop Latour and Father Vaillant bring method, regularity, and organization to a people in the habit of improvising their own rules or bypassing regulations they find inconvenient.

With an ancient bell discovered hidden in a basement, Father Vaillant arranges for the regular tolling of the bells to announce the Angelus and the other normal times of prayer and worship. Bishop Latour brings a teaching order of nuns, the Sisters of Loretto, to the Southwest to establish a Catholic school and instruct the young.

He eventually conceives the idea of building a cathedral in the Southwest after the Romanesque style and brings a skilled architect and master stonecutters from France to build the a church on a prominent site that declares the glory of God to the world.

Bishop Latour brings not only truth and goodness to the simple natives but also beauty. He not only enriches their spiritual life but also teaches them the art of living well rather than merely struggling to survive.

In the ordinary business of his priestly life, Bishop Latour realizes the splendor of the spiritual riches that the Church brings to the souls of simple people.

On a December evening when he feels demoralized at the futility of many of his efforts—his diocese “still a heathen country,” the Indians attached to ancient superstitions, and the lukewarm Mexicans “who played with their religion”—he goes to the church to pray where he discovers Sada, a slave in an American family forbidden to practice her Catholic faith.

Secretly going to the church, the Mexican woman prays with tears of happiness in the presence of the Holy Sacrament and before the statue of the Holy Mother whose feet she kisses.

Deprived of a sacramental life, the desolate woman bursts with gratitude for the Church and for priests: “Nineteen years, Father; nineteen years since I have seen the holy things of the altar.”

This providential event, like finding water in the desert, again validates and reaffirms Bishop Latour’s entire life as a servant of God.

He has reaped an abundant harvest. He has not only taught the Indians and Mexicans how to garden and plant orchards, how to be fruitful and live the “abundant” lives of Christians who know how to live beyond meager survival but also produced a harvest of souls by the lives he changed and touched by being God’s gardener in the vineyard—a true priest.

Without any regrets about his decision to be a priest or a missionary, Bishop Latour can say at the end of his life, “I shall not die of a cold, my son. I shall die of having lived.”