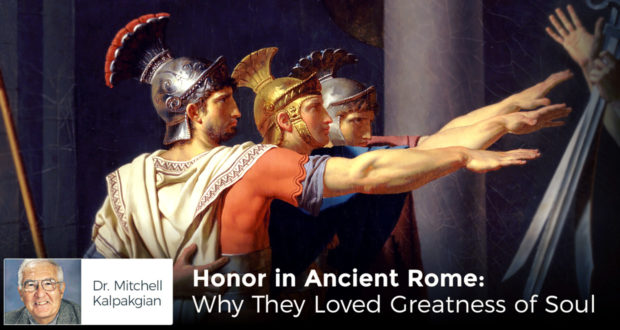 Honor in Ancient Rome: Why They Loved Greatness of Soul

In a world of broken political promises, unfaithful marriages that dishonor vows, and authorities in high office guilty of venality and lies, the virtue of honor rarely informs the public or private life of the modern world.

Yet it inspired the moral life of the patriotic Roman soldier, statesman, and philosopher as a lofty way of life that gave man dignity and integrity and that aspired always for the highest, the best, and the excellent as the human standard of conduct.

Cicero and his Stoic philosophy, based exclusively on the natural law that St. Paul referred to in his Letter to the Romans as “written in their hearts while their conscience also bears witness,” provide a moral ideal that all national leaders, public figures, and ordinary men and women can practice that can transform the world—a virtue he calls “greatness of soul.”

Honor: a Greatness of Soul

In On Obligations (De Officiis) the Roman statesman and philosopher advises his son Marcus to live as a magnanimous man with “greatness of soul.”

This noble moral ideal of manhood embraces many qualities, but its essence is honor. An honorable man never neglects his duties, never fails to perform his obligations to all the persons with whom he enjoys relationships and associations,

“for there is no aspect of life public or private, civic or domestic, which can be without its obligation, whether in our individual concerns or in relations with neighbors.”

An honorable man lives according to the cardinal virtue of justice rendering to every person his proper “due,” giving homage to the Roman gods, rendering piety to ancestors, revering parents, upholding the sanctity of the family, and respecting the humanity of all people.

He follows Plato’s teaching that “we are not born for ourselves alone, for our country claims a share in our origin, and our friends likewise; . . . men have been begotten for men’s sake to be of service to each other.”

A Person of Integrity

The honorable man Cicero praises is never ruled by narrow self-interest but always by the common good, and he determines his moral decisions according to unchanging principles that are “steady and unshifting” rather than based on pleasure and pain.

A person of integrity, the honorable man acts by “good faith, in other words truthfully abiding by our words and agreements.” He never engages in any form of deceit by a misuse of the law through “chicanery” and “sharp practice.”

An honorable person is bound to keep a promise even to an enemy. In a famous episode in Roman history, Regulus, a Roman prisoner captured by the Carthaginians in the First Punic War, received a temporary release to negotiate a prisoner exchange between the two armies.

He not only argued against the prisoner exchange that would free him from bondage –an unfair bargain to the disadvantage of his country—but also returned to the enemy to suffer the death sentence: “when friends and relatives sought to detain him, he preferred to return to face execution rather than to break his word which he had pledged to the enemy.”

Regulus’s example of honor and integrity captures Cicero’s ideal of greatness of soul.

The Ends Never Justify the Means

Roman honor despised treachery and baseness. When a deserter from the army of Pyrrhus offered to poison his king in exchange for Roman protection and asylum, the Roman Senate sent the traitor back to Pyrrhus with contempt for his cowardice:

“This was their way of refusing to approve the treacherous murder even of an enemy who was both powerful and an unprovoked aggressor.”

To an honorable man, the craftiness of the fox and the baseness of cowardice insult the dignity of a human being. He wishes to win only by obedience to just laws and through high-minded motives based on courage and principle. A great-souled man never resorts to the Machiavellian argument that the end justifies the means.

In another famous episode from Roman history, an Etruscan schoolteacher who wished to win the favor of the Romans against his people betrayed not only his army but also exploited children to perpetrate treason and give the Romans an advantage in the battle.

During the time for recreation and exercise he one day cleverly led all his pupils on a long walk to the enemy camp and offered them as captives for use as ransom.

Instead of ingratiating himself with the Romans who felt insulted by the ignominious offer, the schoolmaster was stripped of his clothes, bound by the hands, and sent back disgracefully with the schoolboys whipping him for his vile misconduct.

The Romans said to the schoolmaster that they win wars honorably—by arms and by courage—and not by trickery and subterfuge at the expense of school children. Men with greatness of soul are “guileless, friends of the truth, and total strangers to deceit.”

An honorable man also remembers his debts of gratitude and knows the duty he owes: he must not only return the favor but even “repay in greater measure” with unstinting generosity.

An honorable man knows that nobility obliges and requires largeness of mind, soul, and heart that expresses itself in acts of liberal spending and munificent gifts. He scorns tightfisted miserliness to imitate Nature’s abundance: “Should we not follow the example of fertile fields, which yield much more than they have received?”

Just as he never stoops to selfishness, deceit, or overindulgence, the magnanimous man never descends to the level of the penny-pinching attached to their money.

This quality Cicero explains as a “disregard for external circumstances,” meaning a lack of anxiety about worldly possessions, a detachment from the worship of pleasure, a refusal to be ruled by fear, greed, or anger, and a composure about the ups and downs of worldly affairs.

He does not worry about losing money, pleasure, or safety by his commitment to the right and the just.

The honorable man possesses equanimity, the “mental tranquility” that maintains mastery of the emotions, passions, and appetites and never succumbs to despair, revenge, or vainglory.

By strength of mind he exercises “presence of mind” that remains constant amid fickle fortune’s erratic changes:

“It is a splendid thing to remain level-headed in every condition of life, and to show the same demeanour and outlook at all times.”

Because of this equanimity the great-souled man never displays “bitter anger against adversaries” but rather approaches them to be “conciliatory and forgiving.”

In short, the honorable man maintains the balance and moderation that temperance instills in the soul by self-discipline, a virtue that also cultivates modesty and a sense of the “fitting”–the proper or decent that governs all appetites, never acts carelessly but always with “self-control, austerity, and sobriety.”

The great-souled man upholds his dignity as a rational being with a lofty mind, a noble nature, and a godlike soul: “the nature of man transcends that of cattle and of other beasts.”

Imagine a world with honorable men and women who act in the name of the common good, on behalf of the most defenseless and vulnerable, and for the sake of future generations instead of their vested interests and narrow ideologies.

Imagine a world with magnanimous persons dedicated to fulfilling their obligations to all human beings, especially children, instead of assuming that their only duty is to themselves.

Imagine a world with political leaders in possession of the Stoic qualities of composure, equanimity, and self-possession who would resist the rash impulse to go to war as the solution to all problems.

Imagine a world where greatness of soul despised shameless improprieties that offended the ideal of “the fitting,” the proper, and the decent.

The ancient Romans testified that civilization rests upon the cultivation of the virtue of honor to rescue man from the barbarism of thinking that one can do evil to achieve good rather than loving and doing the good for its own sake.