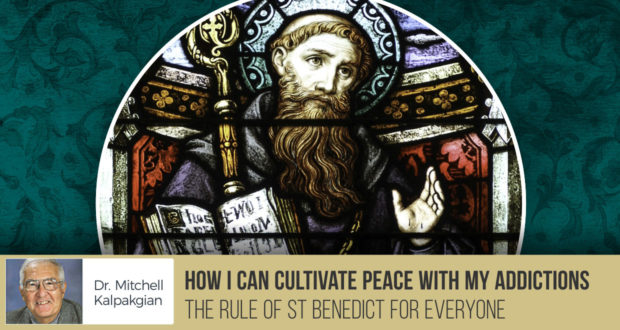 Editor’s Note: This is the third of a series of articles on being at home in the world and living at peace inspired by St. Benedict’s Rule and Christopher Derrick’s The Rule of Peace.

Many symptoms of malaise expose man’s problems at being at peace with himself: food, alcohol, and drug addictions; acts of violence and suicides; post-traumatic stress syndromes; the common use of prescription antidepressants.

Man at War with Himself

Observing the number of people who depend on chemical means of coping with life, Derrick suspects that “modern man is more deeply and extensively at war with himself than his ancestors ever were.”

A reason for this war within man that separates him from his ancestors and older ways of life lies in the loss of self-knowledge.

Without this self-evident truth summarized in ancient Greece at the oracle of Delphi as “Know thyself,” man’s divisiveness only develops into alienation with the world.

Whereas the classical world explained self-knowledge as the truth that man is below the gods and above the animals and whereas Christian revelation defined man as the image of God, the modern secular world has no indisputable first principles about man’s essential nature.

He is neither a “rational animal” capable of governing passions and appetites as the Greeks held nor precious by virtue of his dignity and inestimable worth as Christian doctrine teaches.

The world’s hedonism of “eat, drink, and be merry” that encourages instant gratification and self-indulgence subverts the classical ideal of the power of human reason which they compared to a charioteer who masters the horses.

The Supreme Court’s redefinition of marriage and family also rejects the intrinsic nature of human beings as male and female and reinvents the family as having a plurality of forms.

Man does not experience peace when he denies the self-evident truths of Mother Nature, “the first thing that is and the last thing we know” as an ancient philosopher remarked.

The Spirit of Gratitude

In a therapeutic society that imagines that medicines provide cures for all behaviors, the virtue of self-denial and the strength of will power receive no affirmation. In a culture that panders to instant gratification and the cult of pleasure, the virtue of temperance and the ideal of asceticism lose their attraction.

In a consumerist society based on the constant accumulation of more unnecessary, unaffordable possessions with credit card debt, the ability to live a simple, moderate, contented life loses credibility.

The Benedictine life instills the spirit of gratitude rather than the compulsion for more belongings.

The contentment of the monk, Derrick explains, flows from a simplicity of life and sense of moderation devoid of the stress of competition and the insatiable compulsion for pleasure—the quest of “self-seeking and self-indulgence” that rules many modern lives.

Thankful for the blessings of another dawn and greeting the morning with song, the monk, on the other hand, begins the day receiving and appreciating instead of craving and seeking.

With an abandonment to Divine Providence and an absence of anxiety, the monk orients his life to a keen awareness of God’s nearness and presence as the Father who cares for the birds of the air and the lilies of the field and numbers the hairs of each person’s head.

No one can be at peace with himself when enslaved with uncontrollable passions and insatiable appetites that inevitably lead to deadly sins like avarice, lust, and gluttony, the sources of haunting restlessness that nothing satisfies.

The Greek ideal of the Golden Mean (“Nothing in excess”) and the cardinal virtue of temperance that orders all desires with reason naturally bring satisfaction and rest that accompanies a sense of sufficiency that says “Enough!”

Man only needs his portion: “Give us this day our daily bread.”

Derrick writes, “The actual needs of a human being are few in number and can be met fairly easily; but his possible desires—including those of a sexual kind—are boundless and cannot ever find total satisfaction.”

No one can be at peace filled with constant anxieties about issues like population control, climate change, the stock market, or health care.

Swift in Gulliver’s Travels satirizes scientists rapt in idle speculation worrying about the sun losing its energy and no longer providing heat and light.

In Rasselas Dr. Johnson offers a similar example of foolish fear in the case of a star-gazing astronomer preoccupied with weather foreboding some impending disaster he has imagined he can prevent.

To be alarmed or panicked about every conceivable problem—many of them politically fabricated—denies the goodness of Divine Providence.

A Peace without Stability?

No one can be at peace without stability, a sense of belonging to a family and a feeling of permanence in the home provided by the constant presence of family members.

Just as the Benedictine monk commits to a vow of stability in a monastery where he may spend his entire life and go without the experience of travel and novelty, all persons live in greater peace with themselves in the surroundings of familiarity—friendly neighbors, old places, and a lifetime of associations and memories connected to beloved people, favorite places, and family history landmarks.

So much of the malaise of modern life originates in the instability of modern lives where nothing holds fast. The separations caused by divorce, the absence of fathers, single-parent homes, and blended families inevitably bring their share of fears and anxieties.

Also no person can live at peace if he alienates himself from God and fails to recognize the author of his being and his special relationship with his Creator and Redeemer.  In St. Augustine’s famous words, “Our hearts are restless until they rest in Thee.”

Without a spiritual life nurtured by God’s Word and Sacraments, man never finds the solace, strength, and peace that come from “the bread of life” and “the peace that passes all understanding.”

Without a relationship to the living God, man turns to false gods to find the comfort they cannot give. Without divine grace man cannot carry the crosses of life with patience and perseverance.

Deciding to be Satisfied

As Augustine testifies in the Confessions, none of the worldly attractions of honor, fame, riches, or pleasure satisfies the hunger of the soul, and none of the false doctrines of the day like astrology, Manichaeism, or skepticism fulfill the mind’s desire for truth.

Man, then, learns to be at peace with himself by accepting his God-given nature and acknowledging his purpose in God’s design. He gains this ability by recognizing his rational ability to know the truth and exercising his moral power to resist temptations—the world’s restless pursuits for infinite power, boundless wealth, and insatiable pleasure.

He pursues a simple existence centered on a true vocation, on a stable family life, and on a trust in Divine Providence. He does not suffer anxiety at the thought of life’s burdens and sorrows because he knows that, in Blessed Cardinal Newman’s words, “God is love and God is wisdom”.

As Christ reassured Martha when he visited the home of Mary, Martha, and Lazarus, “Only one thing is necessary.”

To be at peace with oneself is to distinguish these few necessary things for happiness and the hundred useless things that never satisfy.