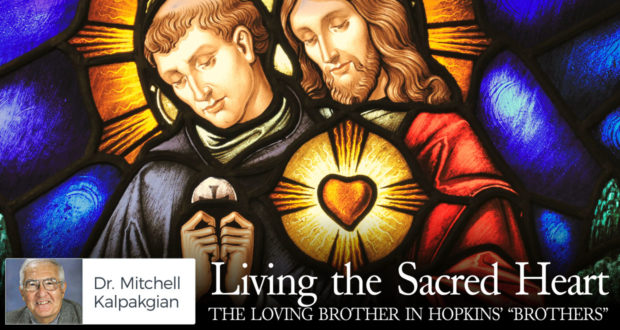 Living the Sacred Heart: The Loving Brother in Hopkins’ “Brothers”

The great Jesuit poet of the Victorian Age and a convert to the Catholic faith because of the inspiring witness of Cardinal Newman, Hopkins is renowned for poems like “God’s Grandeur,” “Pied Beauty,” and “The Windhover” that give glory to God for the prolific beauty of creation—the beauty of the night (“Look at the stars! look, look up at the skies!/ O look at all the fire-folk sitting in the air!”); the beauty of the spring (“Nothing is so beautiful as Spring–/ When weeds, in wheels, shoot long and lovely and lush”); and the beauty of autumn (“Summer ends now; now, barbarous in beauty, the stooks rise/ Around.”

But many of his poems portray characters whose “handsome heart” (the title of one of his poems) radiate the divine as much as the “dappled things” and “skies of couple-colour” that illumine creation with splendors of light and variety in the sky, earth, and water.

One of these unknown, obscure characters is Henry (Harry) in the poem “Brothers.” (A copy of the poem appears at the end of this article). Henry, the most endearing of brothers with a simple, boyish, unaffected, pure “love-laced” heart, illuminates for the priest in the poem (Hopkins) how the spotless human heart mirrors the image of God that shines in man’s heart in moments like these.

In this poem the parish has congregated for the production of the school’s plays at Shrovetide.

John (Jack), the younger brother, has been selected for one of the roles while his older brother Henry (Harry) attends his younger brother’s debut as an actor. However, more than one drama is occurring on the stage that night.

While the audience watches the actors play their parts on center stage, the narrator of the poem (a priest) observes the emotional reactions of the older brother Henry’s response to John’s performance: “I came where called, and eyed him/ By meanwhiles; making my play/ Turn most on tender byplay.”

Of course the older brother does not actually summon the priest because the boy assumes no one is observing him; he is not an actual actor in the play. However, the real drama is not the main play on the stage in which the audience watches John play his part.

The real action is backstage or offstage where the priest witnesses a beautiful, tender scene of an older boy beholding his “brass-bold” younger brother perform with natural poise and perfect confidence: “Nay, roguish ran the vein.”

Henry cannot control his emotions and cries tears of happiness in seeing and hearing the talent of his younger brother: “There! The hall rung! / Dog he did give tongue!” Henry’s tears of joy pour spontaneously as he revels in his brother’s success and thrills for joy because of his brother’s outstanding performance, “his tear-tricked cheeks of flame/For fond love and for shame.”

As a boy or older brother Henry is embarrassed to be crying in public, but he cannot help it because he is “wrung all on love’s rack,” more nervous than John for whom performing on stage is effortless and natural: “He had no work to hold / His heart up at the strain.”

As the priest beholds the actions and reactions of the older brother, he sees Henry’s nervousness in the form of blushes, the biting of the lip, the clenched hands, the clasped knees, the closed eyes, the hiding of the face in the hands: telltale signs that “Told tales with what heart’s stress/ He hung upon the imp’s success.”

The priest, most touched by his unnoticed glimpse of Henry’s deep brotherly love for John, reflects “how lovely the elder brother’s/ Life all laced in the other’s /Love-laced!”

The priest refers to this moment as a privilege. In a stroke of miraculous good luck (“so Fortune fell”) he, alone in all the audience, witnesses for a glimpse the secret of the unveiled human heart in its reflection of God’s image.

Although Henry and John would never use such language as “love-laced” or even speak openly of their affection and indissoluble bond as loyal brothers whose lives have been interwoven with all the strands and threads that unite family members in the shared experience and common memories of their lives, it does not change the undeniable fact of the “love-laced,” delicate, strong, intimate brotherly love they silently share.

Henry’s unconscious revelation of his emotions captures the beauty, goodness, and purity of the human heart as God designed and intended it when He created man in His own image. The priest has glimpsed for a moment the mystery of divine and human love.

The tears of Henry that flow from his eyes begin in the depths of the heart that cannot contain his joy for his beloved brother. The priest, too, is so moved and in awe at the purity of the older brother’s love that he also cannot restrain his tears when the profound reality of love’s truth pierces the soul: “Dearly thou canst be kind: / There dearly then, dearly, /Dearly thou canst be kind” he cries as the words mix with the sobs.

In the dramatic climax of this heartwarming moment, the priest reflects on fallen human nature and the human condition: “Ah Nature, framed in fault” and “Nature, bad, base, and blind” describe the world of original sin, the world the priest knows so well from hearing confessions, the litany of the same deadly sins that deface the human nature created in God’s image.

Yet this rare momentary glimpse of “love-laced” hearts restores a vision of the divine image indwelling in the soul and shining out, a likeness that is as tell-tale as Henry’s clasped hands and streaming tears.

As the priest in a moment of “tender byplay” privately witnesses the unobserved drama of Henry’s soul and his powerful unrehearsed performance, Hopkins touches the mystery of love: If Henry can love his younger brother that much to the point of tears and a priest can feel the greatness of human love with such spiritual depth, how can man even begin to imagine the breadth and length and height and depth of God’s love for each person whose “love-laced” heart mirrors the loved-laced heart of the Trinity and of the Sacred Heart!

How lovely the elder brother’s
Life all laced in the other’s,
Love-laced!—what once I well
Witnessed, so fortune fell.
When Shrovetide, two years gone,
Our boys’ plays brought on
Part was picked for John,
Young John; then fear, then joy
Ran revel in the other boy.
Now the night come; all
Our company thronged the hall;
Henry, by the wall,
Beckoned me beside him:
I came where called, and eyed him
By meanwhiles; making my play
Turn most on tender byplay.
For, wrung all on love’s rack,
My lad, and lost in Jack,
Smiled, blushed, and bit his lip;
Or drove, with a diver’s dip,
Clutched hands through clasped knees
And many a mark like these,
Told tales with heart’s stress
He hung upon the imp’s success.
Now the other was brass-bold:
He had no work to hold
His heart up at the strain;
Nay, roguish ran the vein.
Two tedious pacts were past;
Jack’s call and cue at last;
When Henry, heart forsook,
Dropped eyes and dared not look.
There! The hall rung!
Dog, he did give tongue!
But Harry—in his hands he has flung
His tear-tricked cheeks of flame
For fond love and for shame.
Ah Nature, framed in fault,
There’s comfort then, there’s salt;
Nature, bad, base, and blind,
Dearly thou canst be kind;
There dearly then, dearly,
Dearly thou canst be kind.