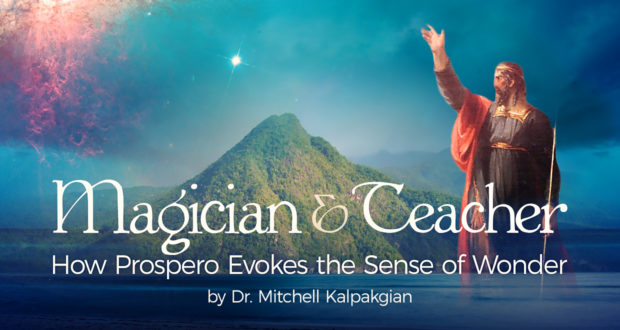 Magician & Teacher: How Prospero Evokes the Sense of Wonder

In The Tempest, Prospero plays the part of father to his daughter Miranda, ruler of the island he governs with justice and mercy, teacher of his apprentices or servants Ariel and Caliban, and master artist or magician who creates works of art.

As father he has raised his daughter to be a paragon of beauty and goodness, a young woman whose name means “wonder” or miracle—a child whose purity, innocence, and refinement radiate both her inner and outward beauty. As Ferdinand, who falls in love with her at first sight, exclaims, “Admired Miranda! / Indeed the top of admiration, worth/ What’s dearest to the world!”

As a master or teacher to Ariel and Caliban he demands excellence, corrects their faults, and teaches them the discipline of excellence. As governor of the island, once a barbaric place ruled by the witch Sycorax, he rules with law and order and instills culture and civilization. Whatever Prospero does, he perfects with the expertise of an artist that produces masterpieces. In all his achievements Prospero, imitating God, reflects the attributes of justice, mercy, wisdom, and beauty.

The Magic of Miranda

Just as all effects resemble their causes, so too children reflect their parents. Miranda is a work of art, a masterpiece who evokes wonder and brings glory to her father because of the combination of her virtues. Kind, compassionate, and gentle, Miranda is the handiwork of a parent who has taught his child the full meaning of good and evil and formed her heart and conscience.

For example, she feels pity for the suffering of the shipwrecked crew during the fury of the tempest, and she shows compassion for Ferdinand’s labors as he carries logs like a slave to win her hand in marriage. “Oh, I have suffered/ With those that I saw suffer!” she cries during the storm. Miranda appreciates goodness in all its forms, especially expressing gratitude for Gonzalo’s kindness in stocking Prospero’s boat with provisions and books when they were betrayed by Prospero’s brother and set adrift in the sea: “Would I might/ But ever see that man!”

Prospero’s magic, then, as parent is the art of bringing out the potential for goodness in his daughter. Miranda’s tender heart, sensitive conscience, and gratitude for all acts of kindness testify to Prospero’s art as a father. Good children are the wonder-working miracles wrought by dedicated loving parents.

As a teacher Prospero instructs two pupils of different temperaments and talents, Ariel and Caliban. Ariel, a pure spirit like an angel or fairy, represents quick intelligence and creative genius, constantly moving all over the island in bursts of lightning speed.

Caliban, on the other hand, is on the animal level, a brutish creature who resists the civilizing influence of Prospero’s authority. To lift Caliban from the level of barbarian, Prospero taught him to talk, but Caliban uses language only to swear and curse.

In his art of teaching Prospero releases the intellectual powers of his pupils, directs them to good ends, and disciplines their energies. He does not allow Ariel have his way or grant to the spirit the absolute freedom Ariel desires until the apprentice cooperates with Prospero’s ideals of excellence and perfection to bring perfect justice on the island. Prospero does not stop punishing the stubborn, obtuse Caliban until the creature finally learns to obey and respect authority.

Prospero as a teacher makes demands of his pupils, expecting them to fulfill his high standards and to act according to their best selves, at the same time respecting their individualities and limitations. He does not tolerate sloth, slovenliness, mediocrity, or insubordination. Prospero does not “dumb down” his teaching to the lowest common denominator but strives to inspire perfection and excellence.

Good teaching is magical and wonder-working because it frees the person from various kinds of imprisonment or enslavement. Without Prospero’s intervention, Ariel would still be confined to a tree or ruled by his own impulsiveness, and Caliban would remain a creature of passion and appetite.

As a ruler Prospero uses his art to transform a barbaric island into a civilized society. He brings manners and morals into the violent world of the island ruled by the witch Sycorax, Caliban’s mother.

He brings beauty and abundance into a deserted, primitive world, taming the wildness and bringing life to a barren world. Gonzalo, one of the shipwrecked crew, marvels at the lush greenness flourishing on the island and the gleaming whiteness of his clothing: “That our garments, being as they were, drenched in the sea, hold notwithstanding their freshness and glosses, being rather new-dyed than stained with salt water.”

As a ruler Prospero not only changes a primitive island into a beautiful, abundant world but also governs according to the common good and the ideal of justice. He exemplifies Plato’s ideal ruler, the “philosopher-king” who models all human justice upon God’s eternal law. In all his judgments and punishments Prospero tempers mercy with justice, exercising authority with gentleness.

After punishing his brother Antonio by the tempest and the shipwreck, Prospero forgives him and becomes reconciled: “The rarer action is/ In virtue than in vengeance.” In his love of justice Prospero overlooks no crime or offense from Caliban’s plot to murder him to Sebastian’s scheme to assassinate his brother to Ariel’s impatience in demanding freedom.

A good ruler is a magical wonder-worker because he uses moral power to bring happiness and prosperity to a whole society and spreads the rule of law and the ideal of justice everywhere.

Thus the art of raising children, the art of teaching apprentices and students, and the art of governing a state all have something in common with God’s art—the creation of good and beautiful works that evoke wonder. Prospero not only imitates or “plays” God when he dons his magical vestments and uses his hidden powers but also when he performs his part as father, teacher, and ruler.

To play God does not mean that Prospero is attempting to be God. To play God as Prospero does is to imitate God, to copy His virtues and reflect His attributes. It is to do good secretly, to exercise prudence and foresight on behalf of others, to think of the common good of all and the future happiness of everyone.

When persons are at their best, they can play God in their roles as parents, teachers, rulers, and citizens and thus work “magic” in their daily life as they produce children, students, and societies that arouse the sense of wonder that all beautiful works of art inspire.