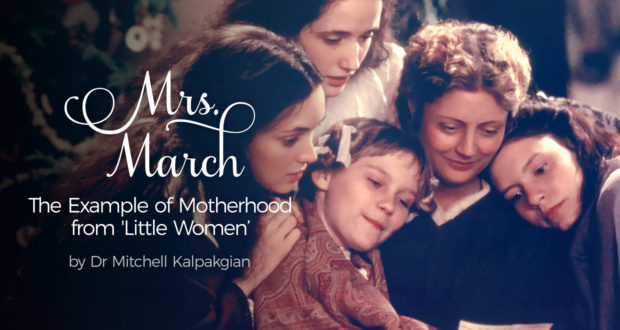 Mrs. March: The Example of Motherhood from ‘Little Women’

A mother of four daughters (Meg, Jo, Beth, and Amy) raising a family in nineteenth century America in the background of the Civil War, Mrs. March educates her children in manners and morals, forms them into intelligent, gracious, loving women, and transmits to her daughters the perennial wisdom of human experience and Christian living.

The Riches of Family Life

Enjoying a humble life in modest circumstances without luxury, Mrs. March teaches her children the riches of family life that wealth does not purchase. The oldest daughter Meg envies girls who can afford gowns for balls and attendance at concerts, Beth feels deprived without the benefit of music lessons, and Amy feels at a social disadvantage with other girls her age who enjoy affluence.

The sisters soon learn, however, that their wealthy neighbor Teddy feels poor compared to the March sisters. Living alone with his grandfather, he feels he is missing the joys of family life when he observes all the fun the March sisters experience. He remarks, “I can’t help looking at your house, you always seem to be having such good times.”

Every evening he notices the domestic joy of the entire March family gathered in one room: “it’s like looking at a picture to see the fire, and you all round the table with your mother.”

While the March sisters love fashion, style, finery, and elegance and think of marrying into wealth, Mrs. March instills in them higher ideals. Although she wishes them “to be beautiful, accomplished, and good; to be admired, loved, and respected . . . to be well and wisely married, and to lead useful lives,” she explains that happiness in love and marriage do not depend upon riches.

She cautions them about worldliness and the temptation to “marry rich men because they are rich, or have splendid houses, which are not homes because love is wanting.” She advises Meg that no ardent lover ignores a woman because of poverty and that some of the most admired women who grew up in financial straits were so “love-worthy that they were not allowed to be old maids.”

When Jo and Amy argue and lose their tempers because Jo does not want to take her younger sister to the theater and Amy retaliates by burning manuscripts of Jo’s stories, the sisters harbor bitter resentment and refuse to talk to each other. Amy taunts Jo with recriminating words: “I told you I’d make you pay for being so cross yesterday,” and Jo also vows revenge: “I never can write it again, and I’ll never forgive you as long as you live.”

Amy’s hostility and Jo’s hardheartedness nearly result in tragedy as Jo, thinking “let her take care of herself,” neglects to warn her sister of the thin ice when skating. After Amy falls in the cold water and narrowly escapes drowning, Jo suffers remorse and guilt at the thought of losing her sister, crying “Mother, if she should die, it would be my fault.”

The sisters learn from their mother the Biblical teaching she cites: “My dear, don’t let the sun go down upon your anger.” Arguments cannot persist, divide family members, and destroy family relationships.

She teaches Meg a similar lesson when Meg and her husband John have their first marital argument, both of them feeling injured and self-righteous while blaming the other. Mrs. March counsels her oldest daughter, “Watch yourself, be the first to ask pardon if you both err, and guard against all the little piques, misunderstandings, and hasty words that often pave the way for bitter sorrow and regret.”

The mother teaches her daughters the largeness of heart and mind that initiates reconciliation and forgives and forgets rather than nurturing resentments and breeding animosity.

Meg also learns from her mother the importance of a cheerful disposition and amiable temperament.

Overwhelmed by the demands of twin children and the business of housekeeping, Meg finds herself irritable and exhausted because she demands too much of herself. Noticing that her husband spends more time with neighbors than in her company in the evening, Meg laments to her mother, “I might as well be widowed.”

Mrs. March asks, “Don’t you neglect him?” Explaining to Meg that a mother both sympathizes and blames, she cautions her daughter about a common mistake of young mothers—forgetting the husband while caring for the children. Children should unite, not separate, a couple “as if they were all yours and John had nothing to do but support them.”

Mrs. March reprimands Meg for always being in the nursery and always unavailable for the company of her husband. No husband can enjoy his home after a day of work without the presence and conversation of his wife.

Just as a husband needs to put his work and business outside the realm of the home, a wife too must not allow her domestic responsibilities to overshadow her interest in her husband’s professional life.

To restore the atmosphere of a welcoming, enjoyable home for a man to return to at the end of the day, Meg needs to make some adjustments.

On the basis of her own marriage, Mrs. March makes these recommendations as the “secret of our home happiness”: Meg needs to stop doing everything and let her husband assume some of the duties of a father and put the children to bed: “Don’t let John be a stranger to the babies.”

Meg needs to leave the house because “too much confinement makes you nervous, and then you are unfitted for everything.” Meg needs to have a social life outside the home and not make her home the universe: “Don’t shut yourself up in a bandbox because you are a woman.”

Meg needs to remember that she is more than a cook, servant, and baby sitter but a woman with a sense of dignity who also needs to attend to her own emotional and physical well-being: “Go out more, keep cheerful as well as busy, for you are the sunshine maker of the family, and if you are dismal there is no fair weather.”

As a mother Mrs. March transmits the wisdom of her experience to her daughters so that loving solutions always provide the answer to difficulties and tensions in a family.

Mrs. March teaches her children gratitude for the simple blessings of family life that surpass in riches the luxuries enjoyed by the affluent.

She instills the need to apologize, repent, and forgive as a virtue always in demand for friendships and family bonds to grow in oneness and affection. She teaches that resentments should not fester and breed hatred, hardness of heart, or spite.

Reminding them that no man, woman, child, or marriage is perfect, she teaches the beauty of humility that apologizes first rather than waiting for the other to seek reconciliation. She offers common sense and Christian wisdom to address life’s difficulties, communicating always that marriage and family life require the art of the possible rather than unrealistic ideas about perfection.

She centers the thoughts of her children always on the first things that matter rather than the distractions, fashions, and trends that divert young minds from the true and the good. While all the March sisters had great aspirations in their young fantasies they called “castles in the air”—Meg dreaming of luxuries, Jo of literary fame, and Amy of artistic acclaim—all find their greatest source of contentment in their marriages and families.

When the Marches celebrate the sixtieth birthday of their mother and see the fruitfulness of her love in the happiness of her married daughters and grandchildren, they hear one of the deepest desires of her heart that forms the center of their own lives: “Oh, my girls, however long you may live, I never can wish you a greater happiness than this!”