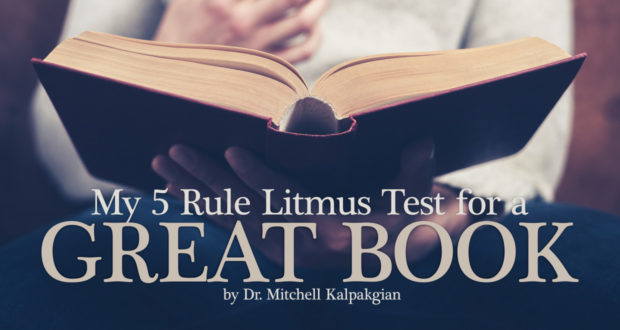 My 5 Rule Litmus Test to Define a Great Book

Dr. Johnson, the eminent British man of letters of the eighteenth century immortalized in James Boswell’s The Life of Johnson and famous for compiling the first comprehensive English dictionary, explained the noble purpose of good literature: “The only end of writing is to enable the readers better to enjoy life, or better to endure it.”

Not everyone enjoys or savors life as he should because he often takes things for granted or lets the world jade him and make him blasé. Great literature, however, not only delights and brings smiles, but even produces uproarious laughter that makes readers fall in love with life all over again.

When Don Quixote rides with his lance into windmills that he calls giants, when John the carpenter in Chaucer’s “The Miller’s Tale” believes that a second Noah’s flood is prophesied and waits on his roof in a tub for the rain, and when Shakespeare’s Puck, a mischievous fairy, puts the love juice on the wrong lover’s eyes, the comedy that follows rejoices the human spirit and releases the elixir of laughter as medicine. How can one not enjoy life more after seeing all the comic material it provides?

When Gerard Manley Hopkins in “Pied Beauty” marvels at the multiplicity and variety of “dappled things” in creation that reveal God’s art, readers see with wonder and freshness the handiwork of the Artist who paints the world with resplendent color.

Above in the sky is the “coupled-coloured” mixture of white clouds on blue sky that resembles the “brinded cow” with its similar blend of white patches on brown hues arranged in motley style. God’s art in the sky and on earth repeats its pattern in the water in “rose moles all in stipple upon trout that swim.” Dots, patches, spots appear as secondary colors on the primary colors of the rainbow spectrum on the fish.

The poem inspires those who have tired eyes to see anew and appreciate the splendor and brightness of God’s art that Nature reflects everywhere—a cornucopia of beauty without limit. How can one not enjoy life more after discovering a world transfigured by the Author of beauty who revels in making all things from delicate “finches’ wings” to vast terrains (“Landscape plotted and pieced—fold, fallow, and plow”) not only good but also plentiful and beautiful?

When Homer portrays scenes of celebration in the Odyssey, he whets the appetite to relish the simple pleasures of home and to enjoy all the pleasures of civilization: the mellow wine, the roasted meat, the music of the lyre, the art of the dancers, the pleasure of storytelling, and the excitement of athletic competition.

After Odysseus wanders to the land of Phaeacia and receives the kind welcome of the king and queen who honor their guest with all the rites of old-world hospitality enjoined by the gods, he compliments his hosts with the greatest gratitude.

Touched by the refinement of their manners and the largeness of their hearts, moved by the music of the minstrel, and savoring the bread, meat, and wine, Odysseus observes, “This, to my way of thinking is something like perfection.” How can anyone not enjoy life’s sweetness more after tasting its most exquisite pleasures and appreciating the bountiful hearts of gracious people who generously share the blessings of life?

Great literature is equally valuable for the way it teaches readers to endure life more patiently and heroically. In King Lear, Shakespeare’s Cordelia suffers the cruel injustice of a father disowning a daughter because she refuses to flatter him by matching the fulsome words of her sisters, boasting they loved their father “more than words can wield the matter, /Dearer than eyesight, space, and liberty.”

For honoring her father with the simple truth (“You have begot me, bred me, loved me”) and for condemning her sisters’ inflated language (“Why have my sisters husbands if they say/ They love you all?”), the impetuous and irascible Lear banishes his beloved daughter and disinherits her with no dowry.

Cordelia does not return evil for evil or vow revenge. She does not fall into despair or self-pity. Instead of dwelling on receiving justice and claiming her “rights,” she fulfills her filial duty, returning good for evil, forgiving Lear for his folly, and comforting him in his dying state.

In a fallen world filled with many tragedies and injustices, the heroic patience and fortitude of a Cordelia give strength to endure life’s hardships more nobly.

In the Iliad the Trojan War brings many casualties to both the Greeks and Trojans. Achilles withdraws from battle because of a feud with Agamemnon who demanded Achilles’ prize. The Greeks feel his profound loss, but they continue fighting even without their illustrious hero.

The other Greek leaders who have assumed command and leadership suffer war wounds and cannot fight. Still, the Greeks refuse to sue the Trojans for peace. Courageous commanders die, and their soldiers continue the battle leaderless. New warriors assumes the leadership roles. The Trojans have witnessed the many deaths of King Priam’s sons, but refuse to withdraw from the campaign.

In each of these examples Homer reiterates that the battle continued like an “inextinguishable fire.” Life goes on. Rosy-fingered dawn comes once again regardless of the previous day’s casualties and losses. The vacuum is filled.

New leaders replace wounded soldiers. The dead are buried, but the war resumes. No matter what happens, no matter who lives or dies, no matter who wins or loses, life goes on, and the human spirit learns the need of “a much enduring heart” to cope with all the strange vicissitudes of the human condition.

Great literature illuminates the mystery of good coming from evil and reveals the providential view of history: the future does not resemble the past, and where there is life there is hope.

The heroine in My Antonia suffers poverty and the struggle for survival on the prairie. As an immigrant girl beginning a new life with her destitute family in Nebraska, she struggles with barely enough food, clothing, or money. Her father’s suicide, a reaction to the misery of the severe life on the land, breaks her heart and burdens Antonia and her brother with the duty of earning a livelihood for the family.

Later in the novel the man who promised to marry Antonia abandons her and disgraces her with an out-of-wedlock child. But none of these adversities break the spirit of Antonia or deprive her of her love for life. Her future does not resemble the past.

The story concludes with Antonia happily married with ten children grateful for the blessings of home and farm. A childhood friend who visits her after twenty years remarks, “I did not want to find her aged and broken.” During the visit he sees darkness overcome by light: “Whatever else was gone, Antonia had not lost the fire of life.”

These are invaluable lessons that every person needs. “The world is so filled with a number of things/ I think we should all be as happy as kings,” the child says in A Child’s Garden of Verses. Literature that teaches readers about these many things moves them to enjoy life more.

The world eventually breaks everyone, the body with the ailments of aging, the spirit with the cruelties of injustice, or the heart in the loss of loved ones.

To endure these storms, a much-enduring heart, the knowledge that life goes on, and the hope that the future does not resemble the past breathes inspiration and moral courage into the soul. And a truly good book delivers this kind of inspiration.