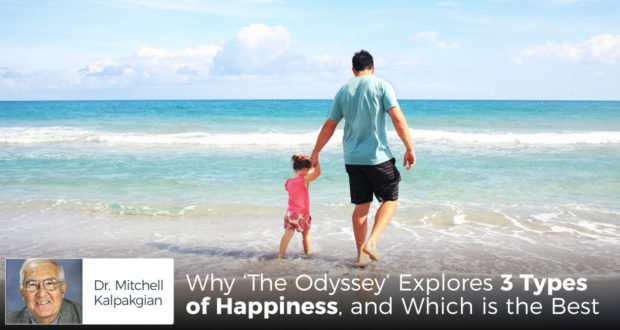 Why ‘The Odyssey’ Explores the 3 Types of Happiness

In Homer’s Odyssey the epic hero Odysseus in his many adventures experiences the entire spectrum of pleasures from the delights of the roasted meat and mellow wine to the aesthetic pleasures of music and dance, but he experiences the fullness of human joy only when he returns home to his family and feels the greatest and purest of joys that express themselves in the tears of happiness.

All the fame of his heroism he wins in the Trojan War and all the treasure he accumulates on his journey do not offer the happiness he seeks.

The Pleasures of the Senses

For seven years during his captivity on the island of Calypso, Odysseus lives on an island paradise “where even an immortal visitor must pause to gaze in wonder and delight.”

Hermes, the visiting god, finds the island a feast for the five senses: the goddess Calypso, “the lady of the lovely locks,” sings with a hauntingly beautiful voice; a fire burns with the scent of juniper and cedar logs; a vineyard teems with clusters of lush grapes, and the goddess’s cave is surrounded with fragrant aspen and cypress trees filled with the music of the birds that nest there.

These pleasures, however, do not fill the homesick Odysseus with the joy his yearning craves.

The pleasures of the body and the delights of the five senses—delightful as they are—do not fulfill the hero with the deepest desires of the heart, “for he was sitting disconsolate on the shore . . . tormenting himself with tears and sighs and heartache, and looking out on the barren sea with streaming eyes.”

Even the love of a peerless goddess whose beauty cannot fade cannot tempt Odysseus to continue on the island that Hermes marveled at with awe.

The Pleasures of Civilization

When Odysseus leaves Calypso’s tantalizing island of ultimate delights, he eventually arrives in a cultured land that welcomes travelers with gracious hospitality.

Odysseus experiences the myriad of pleasures that the art of living offers in cultured societies that know how to live well and to cherish the value of leisure.

The king and queen of Phaeacia regale the visitor with all the elaborate rites of old-world hospitality: bathing and anointing the weary body, feasting the guest with the choicest food and wine, providing comfortable, warm bedding for the night, and then inviting him the next day to tell the story of his adventures and enjoy conversation.

In this country Odysseus delights in the intelligent conversation of the king, the music of the bard, the performances of the dancers, and the enjoyment of athletic competition.

He enjoys all these pleasures of civilization that gratify both the body and the soul from the love of learning to the beauty of the fine arts to the recreation of sport.

The king even offers Odysseus, who has been absent from home for twenty years, the hand of his daughter Nausicaa in marriage and the honor of kingship, but once again Odysseus leaves for another type of happiness which the land of Phaeacia cannot offer him.

All the fruits of a civilized life–learning, beauty, marriage, and wealth—do not satisfy the powerful longing in Odysseus’s heart for his home in Ithaca.

The Pleasures of the Heart

Once he arrives home in the disguise of a beggar, Odysseus sees a loyal swineherd who still tends the flocks with the same care and devotion as if his master were still the ruler.

He beholds his twenty-year-old son Telemachus whom he has not seen since his birth in search of his father.

He recognizes the dedicated maidservant Eurycleia who nursed him as a child and still serves the family with loving care.

He approaches his faithful wife Penelope who has resisted all the offers of the suitors for remarriage out of love for her husband.

And he reveals himself to his ancient father Laertes who has been pining with grief awaiting news of his son.

When Odysseus sees these beloved people from his past and discovers their special affection, devotion, loyalty, love, and longing for him during his wanderings, he is moved and touched to the point of tears—the tears of happiness that epitomize the joys of the heart.

“Odysseus sat down, but Telemachus, softened at last, flung his arms round his noble father’s neck and burst into tears. And now they both broke down and sobbed aloud without a pause like birds bereaved . . . .”

In each of these scenes of recognition when Odysseus finally reveals his identity, some cherished memory of the past is recalled that reminds Odysseus of how much he is loved in Ithaca by not only his father, wife, and son but also by servants like the swineherd Eumaeus and the maidservant Eurycleia who praise him as the best of masters.

In seeing Penelope, Odysseus and his wife recall the story of the marital bed he carved from an olive tree.

In seeing Eurycleia, he remembers the hunting expedition with his grandfather and uncles in which he received a wound from a boar that she cleaned.

The aging Laertes also bursts into tears in the recognition of his lost son as “with trembling knees and bursting heart he flung his arms round the neck of his beloved son . . . .”

In those places Odysseus does not owe devotion to a family, feel affection for a child, remember his love for a wife, or recall the tender care for a parent.

In those places he is not known, cherished, or loved from his childhood as he is in Ithaca. The history of his life does not begin there. For Odysseus to return to Ithaca from where he departed twenty years earlier is to complete the circle of his life—to fulfill his marriage, to raise his son, to care for his father in his old age, and to return all the love he received in the past.

Gazing upon the beautiful beaches on Calypso’s island, regaling in the hospitality of a noble king, and appreciating all the beauty and learning of culture in a civilized city all have their attraction, but they do not satisfy the deepest desires of the heart that only the home and family offer.

Odysseus’s story testifies that all the worldly pleasure, travel, fame, and wealth that a career offers do not move the heart to the tears of happiness that only the intimate bonds of indissoluble relationships in a family bestow.