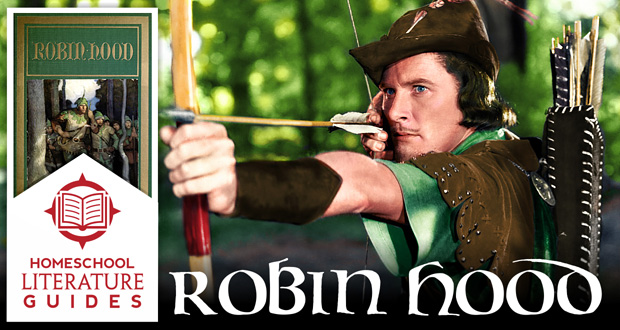 Robin Hood and his band of loyal yeomen who lived in the greenwood of Sherwood Forest enjoyed “the merriest of merry lives” in the days of Henry II and Richard the Lionhearted, a period in medieval history celebrated as “merry old England.”

Then jocund men and women reveled in robust laughter, enjoyed homely country sports like quarterstaff, played good-natured jests, competed in wrestling and archery contests, dressed in lively colors, and tasted the goodness of life in feasting and drinking with hearty appetites and flowing ale (“such as meddles no man’s wits”).

Victims of injustice by the cruel edicts of the king who penalized them for poaching in a time of hunger or who impoverished them by exorbitant taxes and laws that seized their property, Robin and his band retreat to Sherwood Forest and found their society to protest the violation of justice and abuse of power in high places.

Cheated by their oppressors, they vow “they would take that which had been wrung from the poor by unjust taxes, or land rents, or in wrongful fines” and distribute their gain to the poor as just compensation for their losses.

Knightly in their sense of honor, service, and chivalry, Robin and his men follow a moral code that promises “never to harm a child, nor to wrong a woman, be she maid, wife, or widow.”

The Spirit of Mirth

Robin and his merry band abound in laughter and good spirits, never taking themselves too seriously. When the towering John Little is invited to join the merry band and “eat sweet venison and quaff the stoutest ale,” Robin initiates their new companion in a ceremony with a toast and seven sponsors.

When Robin announces, “It is now time, I ween, to christen our bonny babe,” seven of the yeomen carry the “babe,” pour a tankard of ale on his head, and rename him “Little John.”

He then receives a special “blessing” by one of the men: “When thou livedst not thou wast called John Little, but now that thou dost live indeed, Little John shalt thou be called, so christen I thee.”

A jest always marks the spirit of Robin’s mirth.

Robin and his men delight in practical jokes played on fools and scoundrels ruled by avarice.

The Sheriff sends a tinker, a greedy man who boasts of his cunning, to arrest Robin with a warrant. As the tinker approaches Sherwood Forest, he stops at a tavern to seek news of Robin and find a messenger to deliver the summons to the outlaw. There he encounters Robin himself dressed in Lincoln green whom he fails to recognize.

Playful as always, Robin cannot resist a practical joke and, bribed by the Tinker with a handsome reward, volunteers as a willing messenger to lead the tinker to Robin Hood’s secret place of hiding.

As the tinker boasts “I will so bruise, beat, and bemaul his pate,” Robin keeps filling his cup with ale and letting him brag of his slyness until the drunken tinker “fell asleep as though he never would waken again.”

Thereupon Robin takes the warrant, commands the innkeeper to charge the Tinker for all the ale they drank, and also to take all his belongings if he cannot pay his bill: “Thus do I punish those that come into the greenwood to deal dole to me.”

Robin administers justice to his enemies with the medicine of laughter.

A Love of Life

Robin’s mirth, however, goes beyond jests played on greedy fools. It overflows into a love of life, the sheer delight of innocent pleasures, and the blessings of loyal friendship.

Hunting deer, relishing “venison and sweet oaten cakes, and curds and honey,” enjoying the melodious ballads of Allan a Dale, and marveling at the beauty of the countryside with “the sweet birds singing their vespers, and the sheep bleating upon the hillside,” Robin lives the happiest of lives, grateful for the simple joys of ordinary life and never seeking to multiply possessions or increase wealth.

With spontaneity and abandonment “he would skip and leap and sing a snatch of song, for pure joyousness of the day.”

Merry old England is never at a loss for sources of fun, whether it comes in the form of ballads sung to the harp, the companionship of true friends, the revelry of food and drink, or archery contests.

The Joy of Giving

Robin’s love of life welcomes opportunities for the joy of giving and blessing others with gifts.

In one episode Robin purchases meat from a butcher and resells it for a lower price, giving all the women a bargain: he gives them as much meat for one penny as they could purchase elsewhere for three. For old women and widows he charges nothing, and for “bonny lasses” he sells meat for the cost of a kiss.

In another episode Richard of Lea, bankrupt from high taxes and ready to part with his land as payment to the king, pleads with the Prior of Emmet: “As thou hopest for Heaven’s mercy, show mercy to me. Strip me not of my lands, and so reduce a true knight to poverty.”

Immediately Robin comes to Sir Richard’s relief with bags of money. Even though Robin offers it gratis and refuses repayment (“Sir Richard . . . thou wilt pleasure us all if thou wilt keep that money as a gift from us at Sherwood. Is it not so, my lads”), Sir Richard insists on returning the borrowed money but remains in awe at the kindness of Robin’s noble heart: “I owe thee a debt I can never hope to repay.”

Robin’s liberality gives more than bargains at fairs and loans of money to desperate knights in debt. He and his men risk their lives for the beloved members of their band and make gifts of themselves for their friends. When the sheriff captures Will Stutely and arranges for his hanging the following day, Robin and his yeomen vow to rescue him at all costs.

It is second nature to the merry band of brothers “to risk life and limb” for one another. Without any reservations or second thoughts Robin blows his horn to rally his men to Will’s rescue. Their moral code demands sacrifice, “for there was not one man amongst them all that would not venture everything for a friend in need.”

Robin also delivers fair Ellen from an arranged marriage to Sir Stephen whom she rejects to marry her beloved Allan a Dale. As Ellen and Sir Stephen enter the church to marry, Robin blows his horn as the loyal band interrupts the ceremony, replaces Sir Stephen as the bridegroom with Allan a Dale, and summons Friar Tuck to conduct the marriage in place of the Bishop who has conspired to marry a woman against her wishes to a man she has not chosen and does not love.

Robin’s charity and love of neighbor know no limits.

Robin Hood, then, breathes life and inspiration into human lives, rescuing them from injustice, poverty, and death.

In a society ruled by avarice he exemplifies liberality that gives without counting the cost and shows that it is more blessed to give than to receive. He shows that happiness does not depend upon luxuries, palaces, and more bags of gold at the expense of the poor.

He reminds everyone of the goodness of God’s creation filled with lovely lasses, dearest friends, joyous laughter, humming ale, sweet venison, and the glorious beauty of Nature. In his own words, “Methinks I would rather roam this forest in the gentle springtime than be king of merry England. What palace in the broad world is as fair as this sweet woodland just now, and what king in all the world hath such appetite for plover’s eggs and lampreys as I for juicy venison and sparkling ale?”

Man is created for merriment in this life and beatitude in the life to come.