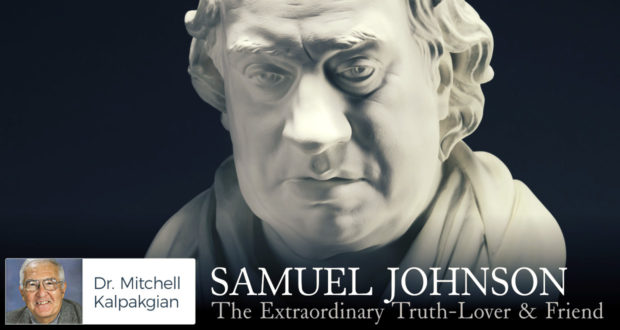 Although Dr. Samuel Johnson is not a fictional character in a novel, he is the subject of a great biography. The preeminent man of letters in the eighteenth century, Dr. Johnson accomplished extraordinary feats of writing.

He singlehandedly composed the first comprehensive English dictionary, edited Shakespeare’s plays, wrote the biographies of the great English poets from the time of Chaucer to his own day, earned praise for his weekly moral essays entitled the Rambler and the Idler, won acclaim for his poems “The Vanity of Human Wishes” and “London,” and distinguished himself as a novelist in Rasselas.

The accomplishments were Herculean feats both in terms of the breadth of knowledge and immense variety of his writing, the length of the works, and the quantity of his publications.

Adam Smith, the famous economist who wrote The Wealth of Nations, praised Johnson for the extensiveness and depth of his reading: “Johnson knew more books than any man alive.”

James Boswell, Johnson’s friend from Scotland and biographer, remarked, “No man had a more ardent love of literature or a higher respect for it than Johnson.”

Always a desultory reader who advised that “A man ought to read just as inclination leads him,” Johnson nourished his mind with wide reading from both the literary and spiritual classics (“Sir, all ancient writers, all manly”) and exerted his mind to the utmost: “A young mind should read five hours a day, and so may acquire a great deal of knowledge.”

Johnson the reader prepared the way for Johnson the thinker and writer.

The Truth of Human Happiness

Johnson’s learning, however, was not merely bookish or pedantic. He excelled in good judgment and practical common sense, never fooled by the popular ideas of the day.

For all his scholarship Johnson never divorced learning from life. He valued literature for its human wisdom, its honest portrayal of the human condition, and he measured the greatness of a book by its ability “to enable the readers better to enjoy life, or better to endure it”—a policy he practiced in his own work.

This is the very purpose of Johnson’s short novel Rasselas, a book that examines the truth of human happiness in an age that fantasized about utopias with simplistic theories like “return to nature,” “the best of all possible worlds,” and the repudiation of civilization as the source of all evil.

Prince Rasselas learns in the novel that no one from wealthy kings to isolated hermits is perfectly happy because everyone has complaints about some aspect of his life.

The king worries about envious rivals, and the shepherd suffers loneliness and loss of friendship. Rasselas, however, also discovers that some human choices and ways of life increase a person’s sources of happiness more than others.

Even though Rasselas acknowledges that “Human life is everywhere a state in which much is to be endured, and little to be enjoyed,” he also acquires a timeless wisdom about happiness that corresponds to Johnson’s own learning and experience.

A life of learning conduces to more happiness than the state of ignorance; the busy and active life with a goal to pursue offers more peace and fulfillment than an idle and slothful existence without purpose; those who enjoy family life and the pleasures of friendship enhance their degree of happiness more than the lonely.

No matter how old a person, he must keep his life in motion and broaden his mind rather than stagnate. Johnson, then, in his view of literature and in his own writing recognizes the role of the life of the mind in the pursuit of happiness. “We grow more happy as our minds take a wider range,” remarks the sage Imlac in Rasselas.

Without an increase in wisdom or possession of the truth, restlessness dominates a person’s life and he dwells in a narrow world. “The mind can only rest in the stability of truth” Johnson wrote in “Preface to Shakespeare.”

In addition to his life of learning and pursuit of wisdom, Johnson prized conviviality and mirth, earning a reputation as an invigorating conversationalist and as a master of the art of friendship.

He prized the enrichment, culture, and social life of London because it offered many occasions for the intelligent exchange of ideas and opinions, what Johnson called “conversation” as distinct from “talk”: “No, Sir; we had talk enough, but no conversation; there was nothing discussed.”

No abstract theories about imaginary utopias compared with the sheer delight and bracing intellectual stimulation Johnson found in the city: “No, Sir, when a man is tired of London, he is tired of life; for there is in London all that life can afford.”

He remarked that the ten mile vicinity of London provided more culture and learning than in the rest of the nation.

Known as a “clubbable” man who relished the company of a great variety of friends from all social classes and professions (actor David Garrick, statesman Edmund Burke, artist Sir Joshua Reynolds, writer Oliver Goldsmith), Johnson made a lifetime habit of loyalty to old friends and openness to new friendships.

As he once famously said, “It would be wise to be continually adding to the number of our friends, that the loss of some may be supplied by others. Friendship, ‘the wine of life,’ should, like a well-stocked cellar, be thus continually renewed.”

Just as the life of the mind must be kept in motion, the social life also needs renewal. Without the cultivation of old friendships and the addition of new acquaintances, a man “will soon find himself left alone.”

Johnson’s famous words on this subject provide another example of his practical wisdom: “A man, Sir, should keep his friendship in constant repair”—a virtue he practiced on Mondays (“clean shirt day”) when he regularly paid visits to members of his social circle.

A Love of Truth and Accuracy

Johnson also won admiration by his high moral standards, exemplary Christian life, and impeccable integrity. All who conversed with him noted his impeccable attention to truth and precision of detail.

Boswell mentions his “strict and scrupulous veracity” that never deviated from the truth or exaggerated in the least. He corrected many statements of friends in conversation when they embellished the truth, withheld some of the facts, or failed to measure their words.

Often Johnson interrupted their account with disbelief: “It is not so. Do not tell this again.” Sir Joshua Reynolds remarked that Johnson demanded of all his friends “a love of truth and accuracy” so that all in his company were most attentive to this matter and lived up to Johnson’s ideal.

Unlike many in London who did not want the inconvenience of company at certain times and told their servants to tell visitors they were not at home, Johnson would never stoop to this custom because “A servant’s strict regard for truth . . . must be weakened by such a practice.”

Clear Your Mind of Cant

Johnson also expressed a strong dislike for pretentiousness that he called “cant,” the falsehood of pretending to have feelings or beliefs that one did not honestly hold.

When Boswell reported that David Hume and Samuel Foote professed they were not afraid of death, Johnson found their statements dishonest and affected: “It is not true, Sir. Hold a pistol to Foote’s breast, or to Hume’s breast, and threaten to kill them, and you’ll see how they behave.”

Johnson’s words, “Clear your mind of cant” referred to inflated words, disingenuous statements, and falsified feelings that compromised the truth. Johnson’s love of truth also shaped his moral life that was filled with strict examinations of conscience that honestly addressed his faults and strived for Christian perfection.

In one of his journal entries he confesses his dissipation, sluggishness, and negligence, and in another entry he resolves “to reject or expel sensual images, and idle thoughts . . . to avoid idleness . . . to worship God diligently.”

Dr. Johnson, then, lived a life committed to seeking the truth, loving the truth, communicating the truth, and defending the truth. He lived according to the highest Christian ideals and strove to heed Christ’s words “You, therefore must be perfect, as your heavenly Father is perfect.”

He was the most enjoyable company and the dearest of friends, so endearing to so many that at the time of his death one man remarked “there is nobody; no man can be said to put you in mind of Johnson.”