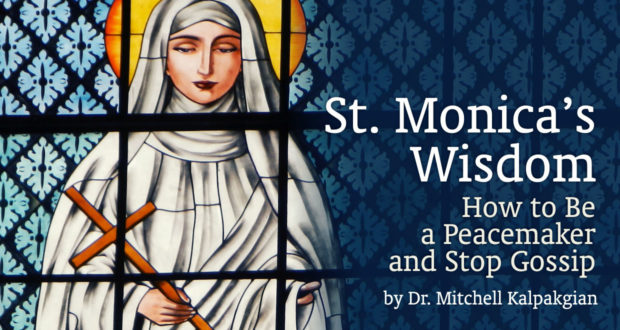 St. Monica’s Wisdom: How to Be a Peacemaker and Stop Gossip

In the Confessions Augustine describes his devout mother as the confidante of many women who trusted her practical wisdom and good counsel. She was a master of the art of peacemaking when arguments between women threatened friendships and quarrels between husbands and wives destroyed the harmony of the home.

This habit of hearing the complaints and criticisms of one person toward another and then reporting them to the one under attack only aggravates the problems and breeds more bitterness. It acts like gossip because it misuses information, spreading abroad in public what belongs in the realm of the private.

This indiscriminate reporting also breaches trust and confidentiality, relaying information not intended for general dissemination. So often the careless, indiscreet use of information exacerbates the magnitude of the conflict and complicates the chance of reconciliation.

Monica’s charity only transmitted those parts of the conversation and pieces of the truth conducive to forgiveness and peace. Instead of inflaming the fires of resentment and multiplying the recriminations, Monica’s prudence used her knowledge to end the feud. She resisted the temptation to indulge in gossip, to spread dissension, and to take pride in the distinction of all-knowing woman.

The sins of the tongue, Augustine explains, do not stop with the transmission of gossip but multiply when gossips “not only tell those who are angry what their enemies said about them, but actually add things, which were never said.” The sins of the unleashed tongue produce untold harm.

Augustine makes another important distinction: While many resist the temptation of tale-bearing by silence and do not communicate the hatred “expressed in its real crudity and in the bitterest terms possible,” few make use of this knowledge to intervene “to put an end to ill feeling.”

In other words, they do not actively practice the words of the Beatitude that Monica lived: “Blessed are the peacemakers, for they shall be called the sons of God.”

Augustine attributed his mother’s extraordinary charity and love of neighbor to God’s “great gift” to this peace-loving woman, and he marveled how Monica led many others to a knowledge and love of God by the example of her speech.

Addressing God, Augustine writes, “All of them who knew her found in her good reason to praise and honor you, because on the evidence of the fruit of her holy conversation they could feel your presence in her heart.” Human conversation and everyday speech can be “holy conversation.”

Monica’s holy use of the tongue also influenced her pagan husband Patricius’s conversion to the Catholic faith. The confidante of many wives with troubled marriages to wrathful, imperious husbands, Monica advised them on the basis of her own marital experience.

Angered by Patricius’ infidelity and subject to his bursts of temper, Monica never quarreled with her husband in his furious tantrums. Augustine explains, “But my mother knew that an angry husband must not be contradicted, not in deed or in word. Only when he had calmed down and become quiet would she, when she saw her opportunity, explain to him the reasons for what she had done, if he had happened to fly into a rage for no good reason.”

By her control of anger Monica also lived the Beatitude “Blessed are the meek, for they shall inherit the earth.”

Hearing many women friends complain of their husbands’ wrath, Monica advised them that “the fault was in their tongues”—a truth they never suspected. They were amazed that Monica’s quarrels with Patricius, notorious for his reputation as “a violent husband she had to put up with,” never persisted beyond a single day, whereas their marital conflicts were more long-lasting even with more mild-tempered husbands.

Those who followed Monica’s example and advice of holy conversation, holy speech, and holy silence “had every reason to thank her for it; those who did not were still kept under and bullied.” Monica was keenly aware of all the strife caused in human relationships by a loose tongue.

Compare Monica’s custody of the tongue to the bird’s tale-bearing in Chaucer’s “The Manciple’s Tale,” a crow that cannot resist the temptation to tell all to its master Phoebus on the pretext of telling the truth.

The crow in its cage that has learned to talk like a parrot reports to Phoebus that his wife has committed adultery during his absence. Infuriated and provoked, Phoebus shoots an arrow and kills his wife, only to lament the rashness of his deed: “O hand too rash, to do so foul a deed! /O mind confused, O thoughtless rage surprised/That smote a guiltless creature unadvised!”

The blind, vengeful Phoebus then turns his wrath upon the crow, excoriates the bird for being a “wicked thief” and ‘traitor-bird,” pulls out all its white feathers so that all crows will be doomed to black forever, deprives the bird of the gift of speech, and banishes it from the household.

The crow’s so-called truth-telling about the wife’s infidelity does not proceed from a purity of heart out of loyalty to the husband, but from the possession of a secret and a love of gossip, not a love of truth or justice. “The Manciple’s Tale” shows all the tragedy, violence, and injustice that follow when a small tattling bird assumes that all knowledge needs to be publicly announced with no sense of discretion or caution about the consequences.

Quoting Solomon, the storyteller moralizes: “Teach every man how to refrain his tongue,” “A wicked tongue but serves the devil’s ends,” “My son, you hold your tongue and you hold your friends.” A hasty tongue, the storyteller explains, is like a sharp sword and can sever a friendship in two. “Superfluous, unthinking speech” can never be recalled or undone after harmful words are uttered and angry tempers flare in reaction.