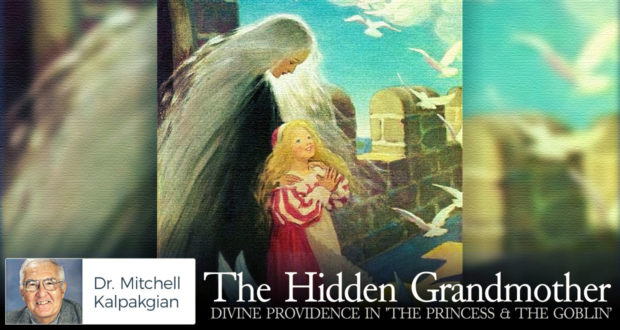 The Hidden Grandmother: Divine Providence in ‘The Princess & the Goblin’

In George Macdonald’s children’s classic ‘The Princess and the Goblin‘, Princess Irene, tired of her toys and unable to go outside because of the inclement weather, wanders upstairs one evening and loses her way: “Nothing but passages and doors everywhere.”

Disoriented and distressed, she notices an open door, hears a humming sound, and discovers an old woman spinning at her wheel. The elderly lady, however, radiates youth despite her silver hair, and she stands dignified and regal without stooping or needing a cane.

Though the old woman reveals her age to Irene as more than a hundred years, she gives no impression of any decline in health or vigor. The old woman with the luxurious silver hair and luminous eyes, identifying herself as a queen and as Irene’s great-great grandmother, remarks, “I came here to take care of you.”

She opens a door in her apartment and leads Irene to see a flock of pigeons with their nests and eggs. Naturally Irene assumes she met a real woman and found her true grandmother, but she soon begins to doubt her five senses and wonders if she were dreaming.

No one believes Irene when she reports to her nurse Lootie that she discovered her beautiful grandmother upstairs living in her apartment. To the maid Irene’s words amount to nonsense, make-believe, or a dream. She dismisses Irene’s story as the figment of the imagination: “Bother your grandmother!”

When Irene goes upstairs to ask the grandmother’s permission to bring guests to her room, she cannot find the venerable queen and begins to doubt her reality. Irene wonders if the nurse spoke the truth by calling the grandmother’s appearance a dream. Can goodness, truth, and beauty be illusions?

Irene, uncertain of the reality of her grandmother upstairs, invites her father the king to pay a visit to the queen in the tower with: “I should like you to take me to see my great old grandmother.”

When the king acts perplexed and unsure of what Irene means, he explains to his daughter that he has no knowledge of her presence in the castle. Assuming his daughter is daydreaming and fantasizing, the king politely indulges his daughter’s whim but refuses Irene’s offer to go upstairs: “She has not invited me, you know, and great old ladies like her do not choose to be visited without leave asked and given.”

Since both Lootie and her father do not take Irene seriously, she too begins to doubt her encounter with the grandmother. No one believes her, and since she could not locate the grandmother when she visited the second time, Irene concludes, “Then it must all be a dream . . . . I half thought it was; but I couldn’t be sure. Now I am sure of it.”

But how can a fragmentary dream leave such an indelible impression on the mind?

Saddened and disappointed, Irene reluctantly begins to accept the idea of the grandmother as an imaginary being even though she wants to believe and hope in the possibility of the grandmother’s real presence and nearness.

Accidentally cutting her finger on a pin, Irene goes to bed after the doctor treats her. Awakening and feeling the sharp pain, Irene instinctively runs upstairs and this time finds her grandmother in her room spinning at her wheel. Surprised and puzzled, Irene once again wonders whether the grandmother is a dream or a reality: “Please, I thought you were a dream. Why couldn’t I find you before, great great grandmother?”

When Irene encounters the grandmother a second and a third time and recognizes the familiar room, the same tall woman with silver hair, and the same kind touch, then her doubts stop troubling her. While idle dreams dissipate, the real repeats itself. Irene begins to believe without always seeing.

No Revelation to Skeptics

The grandmother offers two mysterious answers: Irene would have found her if she believed rather than doubted, and the grandmother did not want Irene to reveal the truth to skeptics like Lootie: “If she were to see me sitting spinning here, she wouldn’t believe me either.”

The grandmother compliments Irene on making another appearance upstairs in search of her as a sign of her belief and trust. During this extended visit Irene grasps more of the reality of her grandmother. She notices a spacious room where a round lamp hangs like a ball, a large bed with a rose-colored coverlet and velvet curtains, and blue walls with silver stars.

The grandmother anoints Irene’s cut with a fragrant balm and relieves her pain. Irene’s five senses cannot forget these vivid details, bright colors, and prominent features. She perceives the sound of the spinning wheel, the sight of a lofty room, the touch of ointment, the feel of a comfortable bed, and the fragrance of flowers.

There is nothing indefinite, vague, or abstract about her grandmother. She must be real, not a dream.

Each time Irene pays a visit, her awareness of the grandmother grows and her belief deepens. When the grandmother asks Irene to come again in a week, Irene promises to keep her word.

Testing Irene so that she learns that belief is an assent of the will based on knowledge and evidence, the grandmother teaches Irene to have faith; each visit and conversation increases Irene’s knowledge of her grandmother’s being and reveals more of her mystery.

The grandmother is present but hidden, real but unknown, half-concealed when no one goes upstairs and half-revealed when Irene finds her. She is an intelligible mystery, and to know her requires both reason and faith.

As the time approaches for Irene to visit her grandmother a third time, she still has some reservations: “Could it really be that an old lady lived in the top of the house with pigeons and a spinning-wheel, and a lamp that never went out?” However, a terrifying goblin frightens Irene before she pays her appointed visit and forces her to run outdoors at night to escape the danger.

Lost in the darkness, she wonders how she will find her way when she beholds her grandmother’s silver lamp lighting the sky and guiding not only the pigeons to return to their nests but also leading Irene to the safety of the grandmother’s room.

This great light, the grandmother explains, shines outside a room and fills the entire sky with beauty and splendor. It goes beyond walls and creates a trail of light for the lost to retrace their steps.

On this third visit the grandmother gives Irene a ball of invisible thread attached to a ring on the finger. Whenever Irene is endangered, lost, or terrified, she must touch the ball of thread and follow it wherever it leads as an act of faith: “But, remember, it may seem to you a very roundabout way indeed, and you must not doubt the thread. Of one thing you may be sure, that while you hold it, I hold it too.”

A Relationship with Divine Providence

As Irene learns from her endearing relationship with her grandmother, the elderly queen exists to lead the lost and wandering home to safety and to provide an escape from the dangers of the night. Just as the grandmother’s pigeons find their way to their nests with their homing instinct and by the silvery lamp that leads them, the thread from Irene’s ring also guides Irene and others out of the darkness and mazes of evil.

The grandmother, then, cannot be a dream because a recurring, consistent pattern operates in Irene’s life with the regularity of a law. Though many are lost in the story, a light in the sky, the trail of a bird, or the line of a thread that originates in the grandmother’s room directs them home.

Irene’s childlike faith that can believe without always seeing or perfectly understanding sensitizes her to the mystery of her beloved grandmother who operates in her life like Divine Providence.

The grandmother is always present, always caring, always protecting the child, always providing a lifeline in the form of a beam, a thread, or the flight of a pigeon that illuminates a way to escape from a maze of steps and doors, from the terrors of the night and the goblins, and from the sense of powerless loneliness when lost in a pathless wood.

This relationship between the venerable grandmother and the simple child is a mysterious connection symbolized by the thread joined at one end to Irene’s finger and at the other end to the grandmother’s spinning wheel—an image of man’s relationship to God based on the belief, trust, and faith that Irene shows when she resists the idea of the grandmother as a dream and comes to know her as all-loving, all-good, ever-present, and all-powerful.