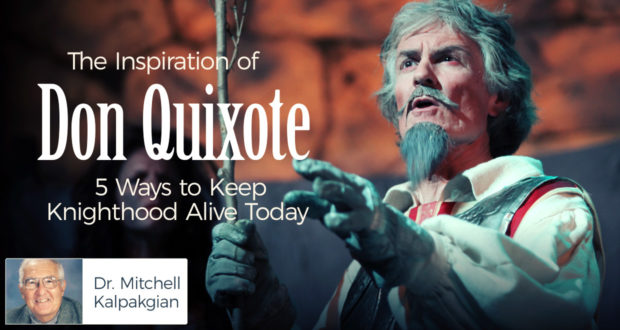 As a Spanish gentleman living a quiet life of retirement and enjoying his favorite pastime of reading medieval romances about knights and their ladies, Don Quixote one day feels inspired to emulate the knights of old and restore the ideals of chivalry, honor, truth, courtesy, and service that his own age has relegated to the past.

Because the modern man of the sixteenth century has revolutionized the nature of warfare by the invention of gunpowder, the institution of knighthood has declined and disappeared. Jousts, armor, and lances are obsolete in the new world called “The Iron Age.”

As the military practice of knighthood has become outdated, the virtues of the knight have also become relics of the past.

Don Quixote, however, knows that the moral code of a knight never ages. Knighthood is not merely a military profession but a way of life that cultivates gentlemen and ladies.

Every society and period of history require men who follow the knightly ideals that elevate the human condition, refine human manners, defend the enduring values of civilization, and restore “The Golden Age” to a world in love with force, power, domination, and money.

Knightly virtues such as courage, justice, mercy, service, chivalry, and courtesy are timeless and universal—for all people in all times in all places.

This glorious vision of knighthood inspires Quixote’s vision to restore these ancient ideals to a crass, vulgar age that has no idea of the beauty of love, friendship, or purity—no idea of the divine attributes of the transcendental realities of truth, goodness, and beauty.

In his quest to revive knight-errantry, Quixote soon discovers it is an object of mockery and a way of life no one takes seriously. Knighthood in Quixote’s world is fictional, appearing only in imaginary stories with unrealistic plots and unlikely heroes who defeat giants and disenchant princesses cast into spells by wizards.

When Quixote arrives at an inn and alludes to the ancient custom of knights who receive hospitality at no cost (“for I have never read in the story of knights-errant that they ever carried money with them”), the innkeeper finds the whole idea preposterous and demands his money. When Quixote requests “a boon,” an unfamiliar term at the inn, the innkeeper stares at him as if he were a madman. He has no comprehension of Quixote’s request to be formally “dubbed” a knight and undergo the “arms-vigil.”

When Quixote addresses the women at the inn as “damsels´ and “your ladyships,” they only ridicule him: “The strange language of the knight was not understood by the ladies, and this . . . increased their laughter and his annoyance . . . .”

In short, the customs, ceremonies, and courtesy of knighthood have passed into oblivion. The loss of these ideals of refinement that ennoble civilization means a lowering of standards and a debasement of human behavior.

A world without a knightly code of honor and chivalry collapses into a way of life in which might is right, people worship gold, maidens violate modesty, men view women as objects of pleasure, and the cunning dupe the innocent.

In one of his adventures Quixote encounters a farmer beating his servant who refuses to work because his master has denied his wages. Quixote performs his knightly duty in the name of justice: “Discourteous knight, it is a caitiff’s deed to attack one who cannot defend himself.”

The knight demands that the farmer pay his servant: “Pay him instantly and none of your denials.” Yet the servant still feels threatened by the cruelty of the farmer because “My master is no knight.”

4. Keeping the Sanctity of a Vow

A world without knightly virtue never honors the sanctity of promises and vows and quickly degenerates into schemes of deceitfulness and trickery. In an adventure in the Sierra Morena Mountains Quixote encounters Cardenio, a man with raving fits of depression and temptations of suicide because of a broken heart and a sense of betrayal.

His best friend Fernando, promising marriage to his fiancée Dorothea, ignored his pledge to his betrothed and slyly attempted to court and marry Cardenio’s fiancée, Luscinda. Fernando had previously lied to Dorothea about his love and intention to marry.

He betrayed both his dearest friend and the woman he promised to marry, and he destroyed the happiness of three innocent people by his lack of honor and chivalry—knightly virtues that Quixote always upholds.

In his devotion to his beloved Lady Dulcinea, Quixote’s fidelity, in contrast, never wavers. He attributes all his victories to her inspiration. He orders his defeated foes to pay homage to his lady. He rejects Princess Micomicona’s handsome offer to marry her, inherit her wealth, and rule her kingdom– an expression of gratitude for the boon the knight granted her.

Even when Quixote’s squire Sancho calls him an utter fool for rejecting such good fortune, he remains true to his ladylove: “I swear your worship is not in your right mind. How else is it possible for you to have any hesitation about marrying so high a princess as this one here?”

Quixote, hearing these insulting words he calls “blasphemies,” angrily strikes Sancho with his lance to defend the honor of Dulcinea and the vow of a knight.

A knight is not a fair-weather friend who easily breaks promises, acts for the motive of self-interest, or changes his mind on the basis of gain, expediency, or comfort. Quixote is guided by eternal ideals, heroic virtues, and magnanimous principles. He has noble intentions like the cause of justice, he serves others like widows and orphans, and he fights for a great cause like the restoration of the Golden Age. Once Quixote commits and pledges his word and honor, it is for life.

The moral code and noble ideals of knight-errantry do not fade with the passing of time any more than manners and morals die. The quixotic dwells in all human beings, but it needs champions, heroes, and apologists to fight on its behalf as fearlessly as Quixote confronts giants and as chivalrously as Quixote defends the honor of Lady Dulcinea.

Human beings aspire to the way things ought to be or merely follow popular trends or the lowest common denominator.

They can live for the lucre of the gold found in the earth, or they can contemplate the heavenly golden light of truth and beauty. They can ignore and tolerate evil, or they can oppose it with the spirit of Quixote: “I challenge you one and all to battle.”

They can live according to the wisdom of the past and the great traditions that created civilization, or they can live as members of the human race who have no past, no legacy, and no inheritance. They have an obligation to preserve and perpetuate, as Don Quixote does, in reviving and restoring the glorious order of the profession of knight-errantry.