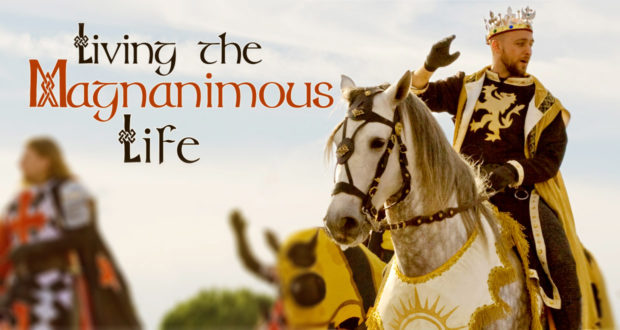 by Mitchell Kalpakgian | The magnanimous man is large-hearted enough to take into consideration the humanity of his enemies.

To be noble, honorable, and generous is the essence of magnanimity. It is a virtue that expresses its large mind in a variety of ways and reflects the liberality of kings and the high-mindedness of knights.

The magnanimous man or woman forgives and forgets past offenses, seeks reconciliation rather than strife, never holds grudges or harbors resentments, rises above petty grievances and petulance, and never stoops to revenge, meanness, or spite.

Magnanimity opposes the vice of small-mindedness that assumes many forms such as self-interest, prejudice, narrow-mindedness’, excessive fault finding, gossip, and quarrelsomeness.

In a famous episode in Howard Pyle’s The Merry Adventures of Robin Hood, Sir Richard of Lea out of gratitude returns to Sherwood Forest to repay a debt owed to Robin for delivering him from the loss of his land and estate to the unscrupulous Sheriff of Nottingham.

When Sir Richard arrives with the bags of gold due from his loan, he opens a strong box and counts the 500 pounds for reimbursement when Robin objects to the payment: “Thou wilt pleasure us all if thou wilt keep that money as a gift from us at Sherwood”—an offer that all Robin’s men affirm with a hearty “Ay.”

The magnanimous man, always generous and never penny-pinching or ruled by money, gives cheerfully and gladly without worrying about the exact recording of accounts in a ledger.

In the “Ballad of Sir Keith” a desperate old woman pleads before King Arthur’s court for a knightly man to rescue her from her plight.

Suffering from a disease that has marred her whole physical appearance and made her look like “the foulest dame” and “a gruesome sight,” she petitions the court that only one remedy will give her relief and cure her condition: only if “Christian knight will willingly/Thrice kiss me on the mouth.”

While the other knights of the Round Table find excuses or express loathing at the thought of kissing a wizened hag, Sir Keith volunteers to do the knightly deed.

The magnanimous man, filled with a large and kind heart, never hesitates to do special favors for those in dire need who appeal to his mercy.

The magnanimous man, who can be touched by the sorrows of others, exemplifies the moral ideal expressed in the proverb “Pity runs quickly in gentle hearts.”

In Gulliver’s Travels the King of Brobdingnag learns of the invention of gunpowder from Gulliver, a visitor to his remote country far removed from European civilization and the politics of England.

When Gulliver offers to teach the king the secret of this new military weapon that destroys ranks of armies, batters walls, and sinks ships, the king recoils at the horror of these barbaric practices and swears “he would rather lose half his Kingdom than be privy to such a secret.” He warns Gulliver never to mention the subject of gunpowder again.

The magnanimous man, a person with a keen sense of justice and honor, never stoops to take unfair advantage of others or exploit their weakness for his own gain.

To a magnanimous man some things are so low, base, and contemptible that he would never resort to them under any circumstances or compromise his moral principles for political or military power.

The magnanimous man’s sense of fair play, proper conduct, and human dignity will not allow him to adopt the way of the world that thinks “the end justifies the means.”

In Pride and Prejudice Mr. Darcy and Elizabeth Bennet insult and offend each other by their bad manners, Darcy refusing to dance with anyone at a ball and rejecting an introduction to Elizabeth because “she is tolerable; but not handsome enough to tempt me”—a comment that Elizabeth overhears much to her chagrin.

Darcy too is offended when Elizabeth, mistakenly jumping to conclusions about Darcy’s dishonorable character, remarks scathingly, “And I had not known you a month before I felt that you were the last man in the world whom I could ever be prevailed upon to marry.”

Both Darcy and Elizabeth, acknowledging their lack of civility and tact, are large minded enough to admit their faults, apologize for their shortcomings, and change their bad manners to be more pleasing and gracious.

The magnanimous have large souls that overcome small-minded pride and act with pure humility.

When they see each other again after a period of separation, Darcy and Elizabeth act with cordiality and agreeableness in the spirit of mutual forgiveness and reconciliation.

Magnanimous persons forgive and forget past offenses, carry no grudges, and give persons a second chance to redeem themselves.

Even after Elizabeth angrily refused Darcy’s first marriage proposal, he was large-minded enough to ask a second time. Even after Darcy insulted Elizabeth by refusing to speak or dance with her, she was large-hearted enough not to let animosity ruin their relationship.

Both rose above pettiness and meanness.

In Chaucer’s “The Knight’s Tale” King Theseus of Athens defeats King Creon of Thebes gloriously in battle but, with true magnanimity, never mistreats the enemy or wreaks revenge. When he finds among the dead two young men from Thebes, Palamon and Arcite, he mercifully imprisons rather than slays them or uses them for ransom.

Later Theseus grants pardon to Arcite on condition that he never return to Athens under penalty of death, while soon thereafter Palamon manages to escape from prison.

When Theseus finds the two young soldiers dueling for the hand of his sister-in-law Emily whom they both love, he has the authority to enforce the letter of the law and to punish Arcite for violating the terms of his release and to condemn Palamon for defying a prison sentence.

The magnanimous man, however, always tempers justice with mercy and judges with the spirit of the law rather than the letter.

Because Palamon and Arcite are fighting for the cause of love, because Arcite risked his life to return to Athens for the sake of Emily, and because Palamon was impelled to escape from prison for the motive of love, Theseus mollifies his anger and relaxes his strict sense of justice: “Shame upon a ruler who will have no mercy but be a ravening lion to those who are repentant . . . .”

He forgives both Palamon and Arcite for their violations of justice and remembers the experience of love (“I know of the pain of Love, and realize, as one who has been caught in his net, how sorely this pain can constrain a man”).

The magnanimous man is large-hearted enough to take into consideration the humanity of his enemies, honor them with the dignity they deserve, and judge according to the extenuating circumstances of the situation.

It radiates the Godlike, noble, sacrificing nature of human beings and shows that all human problems have moral solutions rooted in charity, mercy, and kindness that demand generosity in all its forms: giving without expecting to receive, loving goodness for its own sake with no ulterior motive, and sacrificing for others from a love of honor and a sense of the noble.

It resolves a multitude of problems.