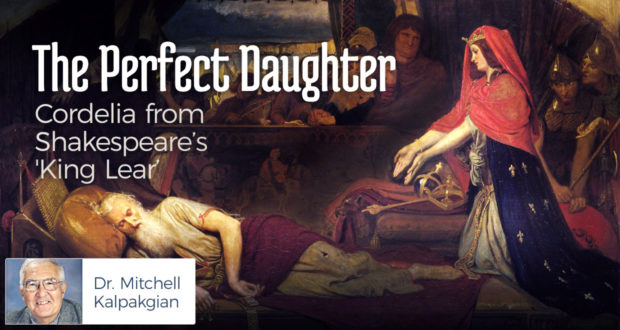 In a grandiose ceremony at court King Lear retires from his kingship and divides his estate and wealth among his three daughters. Before he formally apportions them their inheritance, he asks each daughter to express the quantity of her love for him: “Which of you shall we say doth love us most?”

Goneril will accommodate her father’s prideful, foolish request with flattery: “Sir, I love you more than words can wield the matter, /Dearer than eyesight, space, liberty, /Beyond what can be valued, rich or rare.”

Goneril utters these glib, empty words to receive her father’s wealth and gain her kingdom. Regan also will stoop to the hyperbole of false praise and pompous rhetoric, claiming that Goneril’s testimony “comes too short” in expressing the fullness of her own great love. She declares, “I profess/ Myself an enemy to all other joys . . . / And find I am alone felicitate [happy]/ In your dear Highness’ love.”

Both Goneril and Regan serve Lear to serve themselves, pandering to Lear’s vanity to gain their fortunes and boasting in ostentatious displays that gratify Lear’s ego. Both King Lear’s pride and Goneril and Regan’s avarice act as if love is measurable in quantities of words or possessions—as if it possessed monetary value.

Cordelia, however, cannot lower herself to pretend, dissemble, or exaggerate. Her simple answer to her father’s request for a proof of love is the simple, eloquent, honest truth: “Good, my lord, /You have begot me, bred me, loved me. I/Return those duties back as are right fit, /Obey you, love you, honor you.”

Cordelia’s words reflect justice and humility, rendering to her father his proper due from a thankful daughter aware of her unrepayable debt. She does not pay in words to receive material goods. Her answer expresses gratitude for the love and care she has received and reflects the respect a child owes to a parent, but she does not speak in grandiloquent language or idolize her father as if he were a god.

She honors Lear as a devoted daughter loves a human father, not as a deity who deserves adoration. As Cordelia says with plain common sense, how can her sisters love their father “all” if they have husbands? When she marries, her husband “shall carry/ Half my love with him, half my care and duty. /Sure, I shall never marry like my sisters, /To love my father all.”

Cordelia knows that justice is proportionate, not equal. It is a quality, not a quantity. The proof of love is good works, not idle words. What is owed to a father is not the same as what is due to a husband or to God. Love is founded on truth, not fantasy. Lear’s most loving daughter speaks and acts with integrity. A good father deserves just praise, not servile flattery.

All justice begins with honesty: one cannot do what is just unless one knows what is right.

Cordelia does indeed cherish and honor her father with her truthful profession of love in measured, chaste words. She speaks sincerely from the heart with no intention of currying favor to gain wealth. Cordelia, unlike her sisters, does not give in order to receive or multiply words to increase her inheritance. She does not degrade the beauty and purity of selfless, sacrificial love to the business of profit and loss.

Lear, however, erupts with wrath at the meagerness of Cordelia’s spare words. Disowning her and denying her any dowry or inheritance, he rejects his beloved daughter with cruel, hateful words: “Here I disclaim all my paternal care . . . . And as a stranger to my heart and me/ Hold thee forever.”

Cordelia suffers a great injustice as she gives love but receives hate. Offering praise that Lear interprets as ingratitude and honoring a father who considers her words unworthy, Cordelia is banished from her father’s sight and completely dispossessed. Lear calls her his “sometime daughter.”

Cordelia, however, does not cease loving her father even though he stops loving her. She does not return evil for evil or let resentment, hate, or revenge change her filial affection and devotion for an aged, foolish father in his dotage.

Weeping, she departs with the King of France who marries her even with no dowry, prizing her as worth more than any inheritance: (“Thee and thy virtues I seize upon”) and cherishing her as a treasure, as an “unprized, precious maid.”

Even after their separation Cordelia continues to love her father despite his cruel treatment and bitter words. Her love is real, constant, strong, faithful, and unconditional—not like the fleeting words of her sisters who do not mean what they say and merely profess love on condition of receiving their share of the wealth.

When Lear asks to visit Goneril and Regan with his many royal attendants, they invent excuses to deny their father’s request. They do not even show their father the least respect after they receive his entire fortune. They find it inconvenient to host a king and his large retinue, insisting that he does not need fifty, twenty-five, or even one servant.

They fix conditions upon his visit, Goneril refusing any more than twenty-five: “To no more/ Will I give place or notice.” In utter disbelief and shock, Lear only replies, “I gave you all.” Lear quickly learns the difference between the appearance and reality of love, between hollow words and loving acts. Goneril and Regan gave in order to receive. They took all and gave nothing.

Abandoned by his daughters, Lear suffers a broken heart and refuses the insulting offer of his greedy daughters who inherited their father’s fortune but cannot grant his simple request to welcome him into their castles with the dignity of a king.

When Cordelia learns of the civil war in England between Goneril and Regan and hears of Lear’s sufferings at the expense of his ungrateful daughters whom Lear calls “pelicans,” “tigers,” and “Centaurs” because they forced their father to endure a tempestuous storm on the heath rather than welcome him into their homes, she immediately leaves the safety of France to bring comfort and succor to her grieving father.

She finds the inhumanity of her sisters shocking, horrified that a venerable father and aging king was subjected to “warring winds” and “deep-bolted thunder” in a ferocious tempest that would have moved the human heart to welcome even a stray dog by the fireplace.

Compassionate and forgiving, Cordelia thinks only of consoling and caring for her father in his greatest suffering. In risking her life to protect Lear from his enemies in the midst of political strife, Cordelia is captured and hanged. She sacrificed her happiness in France and her young life for the beloved father who rejected her as unworthy of his affection and fortune.

Cordelia received nothing and gave all.

Cordelia, then, epitomizes purity of heart and love incarnate. She serves her father in every way. She is the most grateful, devoted, and filial of daughters whose unconditional love never stops giving.

Though a queen in France, she attends to her father like a humble servant. Though protected from the destruction of war in the safety of her own kingdom, she endangers her life to save her suffering father from the ravages of a storm and from the rapacity of his cruel daughters. She forgives a father who mistreated her. No son or daughter could have any greater love than this.

Cordelia, who did not flatter enough with many words to please her father, sacrificed her life for Lear, proving beyond a doubt that, in the words spoken by Lear to Goneril and Regan, “I gave you all.”

Share with us below your favorite character from Shakespeare.