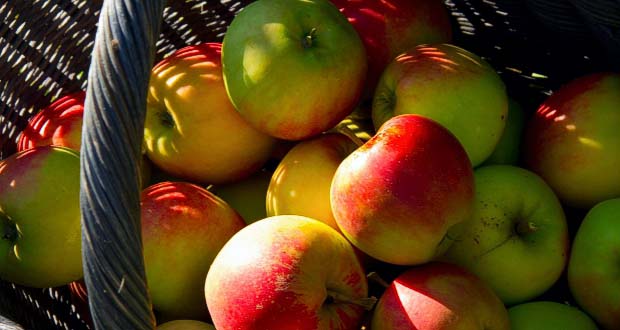 In Robert Frost’s “After Apple-Picking” the narrator spends an entire day from morning till evening picking all the apples before the first frost of the season. He has spent the whole day climbing up and down a ladder, filling barrels, hearing “The rumbling sound/ Of load on load of apples coming in.” It has been an exhausting day of hard, repetitious work: “There were ten thousand thousand fruit to touch, /Cherish in hand, lift down, and not let fall.”

The apple picker accomplished an honest day’s labor, working industriously and diligently to the best of his ability during the hours he spent gathering the apples. Yet, despite his best efforts and the many apples he picked or put in barrels, he did not complete his work perfectly: “And there’s a barrel I didn’t fill/ Beside it, and there may be two or three/ Apples I didn’t pick upon some bough.” Even with the utmost care in handing each individual apple, many fell to the ground and “Went surely to the cider-apple heap/ As of no worth.” Although the apple picker collected a bountiful harvest of apples and feels the satisfaction of a hard day’s labor, he did not achieve all the tasks he intended to finish.

However, he worked from dawn to dusk and spent all his energy to complete the task as thoroughly as possible. He feels the weight of exhaustion overcoming him and senses an irresistible sleepiness:

But I am done with apple-picking now.
Essence of winter sleep is on the night,
The scent of apples: I am drowsing off.

The slumber he welcomes as the reward of his labor, however, does not promise perfect rest. While the apple picker no longer climbs up and down the ladder or touches thousands of apples in the course of the day, he anticipates the continuation of his work during his rest and predicts the nature of his dreams:

And I could tell
What form my dreaming was to take.
Magnified apples appear and disappear,
Stem end and blossom end
And every fleck of russet showing clear.

While he rests, he works; while it is night when he sleeps, it is day as he recollects the hours of labor; while his body is passive and unconscious, his mind is active and thinking. Even though he admits the limits of the daytime hours and the weakness of the body after the toil of physical labor, confessing “But I am done with apple-picking now” and “for I have had too much/ Of apple-picking,” the narrator cannot stop thinking or working at night in his sleep.

The art of living acknowledges weakness, limitations, and imperfections. In the course of the day a person’s lists of tasks or entire agenda may not reach completion. What is not finished on one day remains for tomorrow. Night and day overlap just as one day’s work continues into the next day.

The art of living is not perfection but a sense of accomplishment, the reward of doing essential work according to the best of one’s ability.

The art of living is the wisdom of not demanding the impossible of oneself and not rushing to do too many things. To do one’s best, to do an honest day’s work, to make the most fruitful use of time may lead to modest results, uncompleted tasks, and a restless night of dreaming about the day’s work rather than the release of all anxiety and tension.

Yet as the apple picker anticipates “just some human sleep,” not the hibernation of a woodchuck’s “long sleep,” he lives in the full reality of the human condition, the nature of things that grants man only temporary, interrupted rest even though he longs for the perfect peace that forgets all unfinished work and resembles the untroubled deep slumber of the woodchuck’s long winter night.

How do you respond to modest results when you’ve given a task your all?