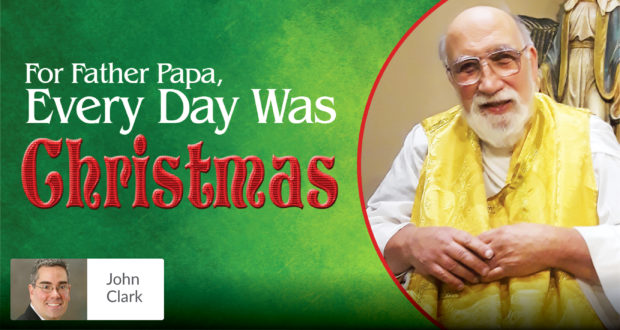 For Father Papa, Every Day Was Christmas

Father Papa was a friend of Seton and of John Clark. Mr. Clark asks you to take a moment so he may introduce you to his friend, a most remarkable priest.

Father was a very important friend to Seton Home Study School: he was a board member of Seton for years, wrote numerous columns for the magazine, and attended plenty of homeschool conferences at which he spoke words of encouragement to parents and heard their confessions.

He had a special respect and admiration for homeschooling mothers as well: Father once mentioned to me that he felt as though he should genuflect in the presence of homeschool moms since the work they were doing was so important and holy.

I first met Father Papa about fifteen years ago. Father Papa said daily Mass for the Front Royal community at the Human Life International (HLI) chapel. And the first thing that struck me about Father Papa was—and I know this sounds funny— Father Papa talked a lot about sin.

He wasn’t shy when it came to telling the congregation how evil sin was, and how damaging sin can be in our relationship with God. Like Saint John Vianney, Father Papa delivered fire and brimstone sermons that were legendary. 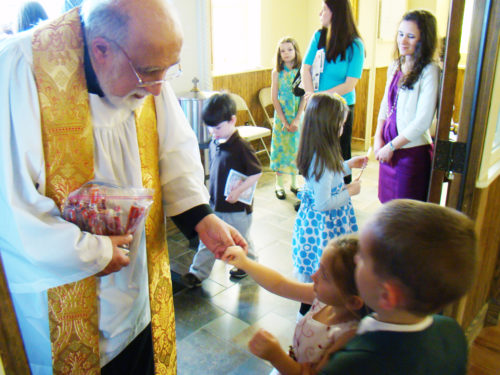 After each daily Mass, all the children would get in line and Father Papa would hand out candy to each child. Now, you need to remember that this is Front Royal, Virginia, where families of eight, ten, and twelve children are commonplace. Translation: Father handed out a lot of candy!

Back then, I operated an investment firm on the second floor of the HLI building, and many a time I was tempted to run upstairs and buy stock in Hershey because of the candy distribution program taking place on the first floor.

After Father finished handing out candy, he would hear Confessions for ten minutes, half an hour, two hours—however long it took. Mothers and fathers would take their children and, one by one, find absolution and the mercy of God’s forgiveness. Mass, candy, Confession—this was Father’s modus operandi for years.

Love for the Infant Jesus

At Christmas time, Father’s routine changed up a bit. Father’s hobby was collecting Nativity scenes from all around the world, and with the help of a team of friends, Father set up about a dozen manger scenes all around the building—each one more extravagant, ornate, beautiful, wonderful, and enchanting than the last. Each crèche scene was complete with things like sparkling lights, tiny palm trees, and little fountains—the Nativity story retold in miniature. 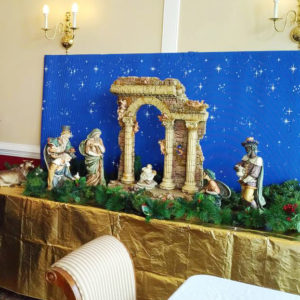 After his normal routine, Father would give families “tours” of the manger scenes, which lasted about thirty minutes or so. Many a December day, I would call over to my business partner and let him know that I was going on a tour of Christmas. Father never knew how much those tours meant to me, giving me a much-needed break during a rough day of stock market turmoil. (Now, I wish I had remembered to tell him.)

Father would conduct tours every day for about eight weeks, as they started in Advent and continued until Candlemas in February. Though he eventually took them down, I doubt Father would have minded leaving them up all year.

For Father Papa, Christmas was not just a day nor a season. It was a profession of the love of God. It was a reminder that Jesus came to us as a baby because He wanted sinful men to approach Him with confidence and love. All in all, Father Papa had a devotion to the Infant Jesus more than anyone I have ever known.

For Father Papa, every day was Christmas.

In his last few years, Father found it necessary to live in a retirement home where he was able to obtain physical assistance and healthcare; yet, for all his physical ailments, his priestly duties continued.

He would say Mass which my son, Bonaventure, (pictured below) sometimes served for him in a little chapel in the facility for the sick and aged. And not only did he say Mass—from a wheelchair—but he would hear Confessions for numerous Catholic families in town, of which ours was one. And that is a story of its own. 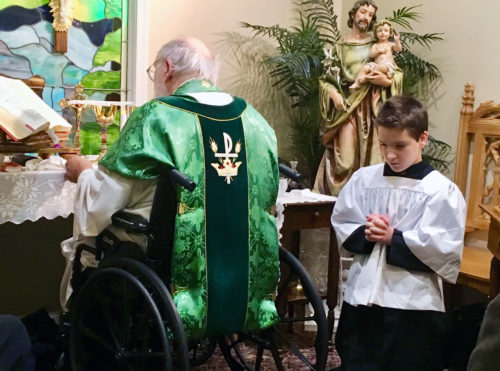 If you look at many religious books and manuals, they’ll tell you that it’s often difficult for people to go to Confession. But you know something funny? My kids loved going to Confession. Lisa and I never had to ask them if they wanted to go to Confession; they would come and ask us to take them. It was their chance to see an old friend who offered them absolution, encouragement, and consolation. And, of course, candy.

One Holy Week when Mary Katherine was three years old, she watched us stand in line and go to Confession one by one. Mary Katherine, not wanting to be left out, walked over and got in line, standing at dutiful attention as though she were part of a formal military exercise. I figured she’d get tired of standing in line after a minute and walk back to her pew; only, she didn’t.

She, like everyone else in line, patiently waited for her turn. After a few minutes had gone by, I walked over, picked her up and told her that she was too young to go. She disagreed, complete with foot stomp, crossed arms, and insistent scowl.

Two years later, when the other children went to Father Papa, he agreed to help Mary practice her Confession on a few occasions. And one eventful Saturday, Father Papa asked Mary, “Mary, what is Confession?”

So Father assured Mary, “That’s right! You are ready for your first Confession.”

In some ways, that story best describes Father Papa; he was not going to stand between a penitent and forgiveness, regardless of whether that penitent was five or one-hundred-and-five. Again, like Saint John Vianney, Father Papa was called to heal the wounds of sin that separate us sinners from God.

Much of Father’s life was spent helping people either strengthen their friendship with God, or begin a new one. I hope that Father Papa somehow realized how big a role he played in helping us fathers raise our children. It can be said, it should be said, Father Papa helped families live sacramental lives; he helped families grow closer to God.

How We Remember Father

One week before he passed away, we all went to visit Father Papa, and we set up a time for the children to come to Confession the next day. Since he seemed so tired after a few minutes, I asked Father Papa if he would give us a special blessing before we left. He frowned and said, “I’m happy to give you a blessing, but I’d sure like you to stay and visit for a while.”

Maybe he sensed that he wouldn’t have too many more chances. So we stayed and talked. We talked about fatherhood, childhood, writing, candy, Narnia, and God. We always talked about God. As a great saint once wondered, “What else is there?” 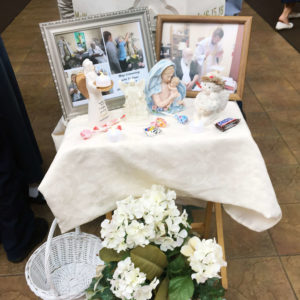 When I received the news a few days later that Father had passed away, I was sad that I had lost a friend, and I had no idea how to tell my children. After Lisa and I told them, we talked a lot about how much he had meant to us, along with plenty of happy and funny stories. We will all miss him, but only for a short time; for the faithful Christian, the sting of death is only temporary, something of which I reminded Mary Katherine.

When I tucked her into her bed that night, I assured Mary, “You will see Father again in Heaven. And he’ll be very easy to find. Just look for the long line of happy children waiting for candy.”