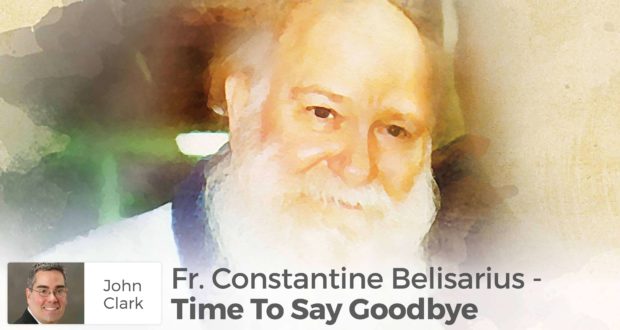 John Clark reviews the final days of Father Constantine, concluding that Providence was to be thanked for granting John and many others such a good friend.

A few months ago, I wrote about my friend Father Constantine Belisarius and how he was on the road to recovery from a serious illness.

I am very sad to report that on November 27th, 2016, Father Constantine Belisarius passed on to his eternal reward.

Sometimes God gives people another five decades. Sometimes He gives them only enough time to say one more Hail Mary—the one that mattered most.

Though Father’s friends were all hoping that he would live for another few decades after his serious illness, it was only a few months. But in those months, many wonderful things happened: some we’re aware of, and some we will only know about in eternity. It’s not mine to speak about Father’s specific spiritual place—though I’m confident that he was in a good one.

Maybe Father had a few moments in Purgatory he needed to “work off,” so God replaced his purgatorial fire with the warmth of being surrounded by those who love him; that way, he could enter Heaven right away, without a moment of separation from his beloved Jesus.

Maybe he needed to affect a few more lives—nurses, doctors, friends, family, homeschool moms and dads—in his final months. Maybe there was a little more wisdom he needed to impart to others.

For my part, in the past three months, I was blessed to become even better friends with Father. Those three months—and the conversations that took place in those months—mattered a great deal to me.

As many have observed, one of the things that modern society is missing is its reliance on the wisdom of the aged. We have silenced the elderly because we have silenced wisdom—or better put, we have turned a deaf ear to wisdom and the wise.

But while we’re saying Goodbye to Father, we can perhaps console ourselves with thinking about the Hellos that Father is likely making right now. I’d love to be a fly on the wall of Heaven when Father Constantine meets Saint Athanasius for the first time. I imagine it would go something like this.

Father passed away on the first day of the new liturgical year in the Roman Rite—the first Sunday of Advent. He was a man famous for his long liturgies, and now he is off to take part in the eternal liturgy of Heaven.

Please pray for the soul of Father Constantine. I mention this for two reasons: first, it is the calling of Catholics to pray for their departed loved ones who may be in Purgatory, and second, if I failed to ask for your prayers for his soul, I could expect a rather stern talking-to by Father Constantine when I arrived at the pearly gates. Anything less would be out-of-character for him.

I’ll close with some wisdom of C. S. Lewis that Father Constantine would have appreciated, but perhaps never more so than right now. I have found these words very consoling, as Lewis explains that Christian friendships are not the things of accident, but of Providence. Lewis maintains that we don’t choose Christian friendships, but that God chooses them for us. And that friendship has been, and will continue to be, my honor.

“In friendship…we think we have chosen our peers. In reality a few years’ difference in the dates of our births, a few more miles between certain houses, the choice of one university instead of another…the accident of a topic being raised or not raised at a first meeting–any of these chances might have kept us apart. But, for a Christian, there are, strictly speaking no chances. A secret master of ceremonies has been at work. Christ, who said to the disciples, “Ye have not chosen me, but I have chosen you,” can truly say to every group of Christian friends, “Ye have not chosen one another but I have chosen you for one another.” The friendship is not a reward for our discriminating and good taste in finding one another out. It is the instrument by which God reveals to each of us the beauties of others.”